Accessibility links
'Wired To Run': Runner's High May Have Been Evolutionary Advantage : Shots - Health News Endurance athletes sometimes say they're "addicted" to exercise, and research suggests that may not be an overstatement. 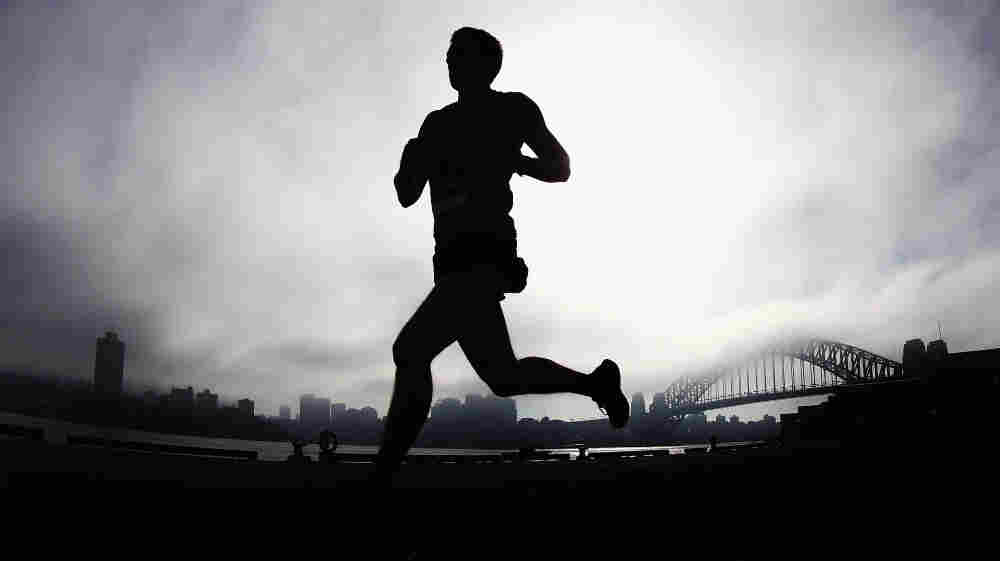 Endurance athletes sometimes say they're "addicted" to exercise. In fact, scientists have shown that rhythmic, continuous exercise — aerobic exercise — can in fact produce narcoticlike chemicals in the body.

Now researchers suggest that those chemicals may have helped turn humans, as well as other animals, into long-distance runners.

The man behind the research is University of Arizona anthropologist David Raichlen, a runner himself. He does about 25 miles a week.

Being human, Raichlin has some tools that help — short toes that don't get in the way, for example, and big joints in the legs to absorb shock. But he thinks humans are also "wired to run."

"Wired to run, meaning that our brains are probably, have been sort of rewired from an evolutionary sense to encourage these running and high aerobic-activity behaviors," Raichlen says.

Many anthropologists think early humans learned to run long distances to chase down and exhaust prey, like antelopes.

Meat is one payoff for runners. But Raichlen thinks there may have been another reward: a runner's high. He designed an experiment to test this idea.

But first, let's take a look at this thing they call runner's high. I caught up with Christina Morganti to learn more. She's an orthopedic surgeon at the Anne Arundel Medical Center in Maryland, and a longtime competitive runner.

She runs races, but not for medals. "To be honest," she says as she starts a morning run on a sunny spring day, "I don't really care that much about the competition as much as that feeling you get when you're in shape. That's what I'm looking for."

She starts slowly. "You know, when you first start, you feel a little stiff, a little logey, but then once you get started, everything loosens up."

As a doctor, Morganti knows what regular running does for her body. "Your heart gets stronger. It gets bigger. The amount of blood your heart can pump is more." That's called "stroke volume." Oxygen metabolism gets more efficient, as well. "That means your blood vessels and muscles absorb more oxygen," she says. "Running also builds new bone."

But when I ask her about "runner's high," she lights up. "Oh, it's really like an empowerment. And zen at the same time. You feel strong and light, and you feel relaxed."

Morganti injured herself running two years ago and had to stop running. "And everything else fell apart," she admits. "My ability to cope with the stresses of life, my organizational skills juggling your job and motherhood, everything like that, wasn't as acute as it was when I was able to run and be fit."

About 3 miles into the run, Morganti is getting her rhythm but also feels some pain.

"I'm actually a little bit tired," she says. "I have a hamstring injury; I'm starting to feel that a little bit now. But I'm feeling like, 'What a beautiful day. How nice to be out here,' and I don't care about that."

That's actually a problem — her not caring. Morganti treats runners for injuries, and she says they're the worst patients. "The treatment is to stop running," she says. "They won't. They don't want to. A lot of the behavior is not unlike the patients we have who are seeking drugs. It's really similar. It's an addiction."

A drug addiction. And that's where we return to David Raichlen's experiment.

When people exercise aerobically, their bodies can actually make drugs — cannabinoids, the same kind of chemicals in marijuana. Raichlen wondered if other distance-running animals also produced those drugs. If so, maybe runner's high is not some peculiar thing with humans. Maybe it's an evolutionary payoff for doing something hard and painful, that also helps them survive better, be healthier, hunt better or have more offspring.

So he put dogs — also distance runners — on a treadmill. Also ferrets, but ferrets are not long-distance runners. The dogs produced the drug, but the ferrets did not. Says Raichlen: "It suggests some level of aerobic exercise was encouraged by natural selection, and it may be fairly deep in our evolutionary roots."

Raichlen published his research in the Journal of Experimental Biology. He says it's not conclusive, and he needs to test a lot more animals. Some anthropologists say it's actually walking we evolved to do, and that running is just incidental.

But don't tell that to Christina Morganti. She has just finished her run. And she's happy. "It's almost like a little tingle you get for several hours after, and then a calming you have the rest of the day, and then you sleep well that night, and then the next day you're ready to go again."

Even without an antelope to chase down.