Accessibility links
Shopping Bags Can Also Carry Stomach Flu Virus : Shots - Health News Norovirus particles can fly through the air, land on things like plastic bags and survive there for weeks, according to an investigation of a stomach flu outbreak in Oregon. The researchers say this proves you don't have to have direct contact with someone to get sick. 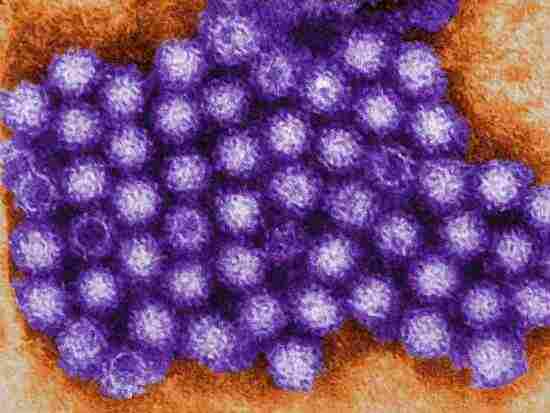 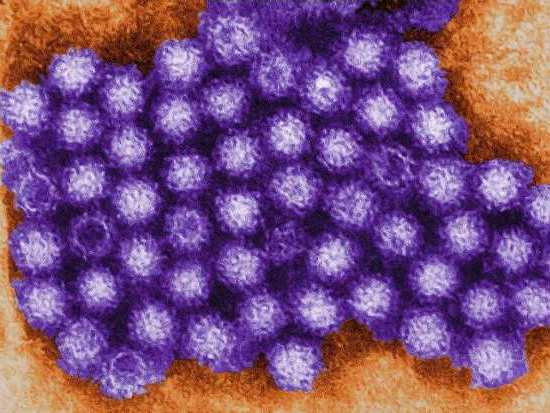 An electron micrograph of human norovirus.

Think you're safe from norovirus, the nasty bug behind the stomach flu, if you steer clear of someone who has it?

Think again. Researchers in Oregon investigating an outbreak of stomach flu among some young soccer players learned the virus can hitch a ride on those reusable plastic bags many of us have gotten accustomed to carrying to and from the store.

Hold up, you say. A bag carrying a virus? Sounds a little strange, but what happens, as epidemiologists from the Oregon Public Health Division and Oregon Health & Science University report, is that virus particles from vomit and feces can actually fly through the air, land on things like bags, and then survive there for weeks. Their findings are out today in the Journal of Infectious Diseases.

Remember this is a highly contagious bug, one that can have a field day with people in confined spaces — on cruise ships, in nursing homes, even inside the locker rooms of professional basketball players.

Noroviruses "are perhaps the perfect human pathogens," writes Aron J. Hall of the National Center for Immunization and Respiratory Diseases at the U.S. Centers for Disease Control and Prevention in an editorial that accompanied the study. The bug is responsible for an estimated 21 million cases of stomach illness annually in the U.S. alone.

So it's not that unusual for norovirus to sweep through a group of 17 teenage soccer players from Oregon and their four chaperones while they were staying in a hotel for a soccer tournament in Washington state in October 2010.

How the spread was tracked

Science Friday: Tracking The Spread Of A Nasty Virus

At 21 people sick, this was a pretty small outbreak. But it demonstrated something that norovirus experts had long believed but never quite proved: You can get the bug without direct contact with another sick person.

Here's what happened on the trip, according to Kimberly Repp, one of the study authors: One player picked up the virus (no one knows from where) and promptly got violently ill in a hotel bathroom that also happened to have a plastic, reusable bag full of food in it. Her chaperone was so concerned she hustled the girl straight home, getting sick herself, and leaving the bag there.

Enter another chaperone, who takes the bag back to her room, and distributes the food to the other players and chaperones. They also get sick. But the key point here is that the first sick player and chaperone never saw or had direct contact with the others before leaving. This means the others got sick from the bag, the researchers concluded.

"Everyone has suspected that noro can be transmitted this way, but they haven't been officially linked," Repp, an epidemiologist at Oregon Health & Science University, tells Shots.

There are many lessons to glean from the study, the first of which is probably a pretty obvious one: Don't store food in the bathroom.

Next, Repp says that if someone is sick with norovirus has been around food, it's critical to throw all of it away.

And what about the plastic bag? Is it the true villain of the story? Not really, says Repp, but the story of the Oregon soccer girls should help remind people to clean those shiny reusable bags on a regular basis.

Still, this isn't the first time those reusable bags have been fingered as vehicles for germs. As we reported back in 2010, one study found that more than half of a batch of 84 reusable grocery bags contained some sort of coliform bacteria, including E. coli, though the health risks from those findings seemed minimal.

But when it comes to norovirus, Repp says caution should be exercised with everything around the house that someone sick gets near. "As long as something can land on it, it can transmit the virus," says Repp. "It doesn't matter what the substance is."