Accessibility links
Feds Join Fight Against Whooping Cough In Washington : Shots - Health News About 1 in 5 infants who get whooping cough will get pneumonia, and in some cases die. In Washington state, confirmed cases are 10 times as high as they were last year. 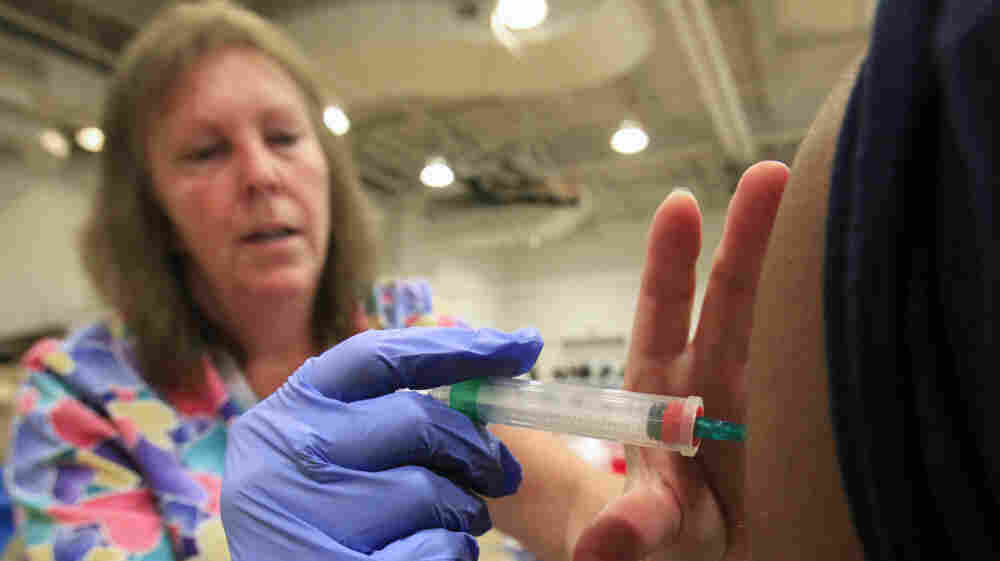 Nurse Susan Peel gives a whooping cough vaccination to a high school student in Sacramento, Calif. The whooping cough vaccine given to babies and toddlers loses much of its effectiveness by the time people reach their teens and early adulthood. Rich Pedroncelli/AP hide caption 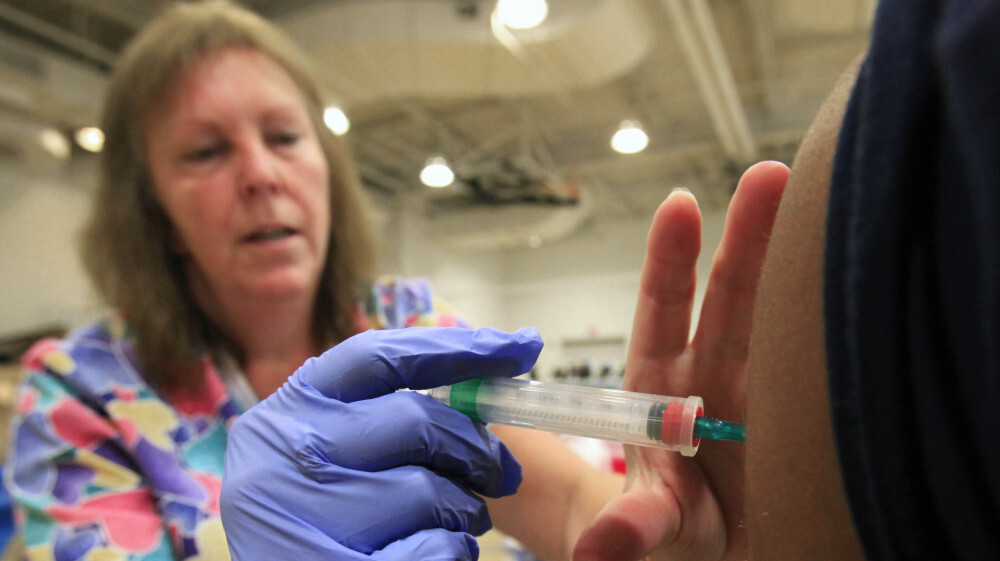 Washington state is in the midst of a whooping cough outbreak. The state has more than 1,100 confirmed cases so far this year — that's 10 times as many as this time last year, and health officials fear the number may rise.

The state is desperately trying to raise awareness of the epidemic. Take this public service announcement featuring a mother whose baby contracted the disease.

"My name is Chelsey Charles. In 2011, my baby Kaliah died of pertussis, or whooping cough, a completely preventable disease. It devastated my family."

Last week, Gov. Christine Gregoire asked for federal help, so investigators from the U.S. Centers for Disease Control and Prevention rushed to the state. Now the feds are helping local health officials figure out what's behind the whooping cough epidemic.

Gregoire is also dipping into the state's emergency funds for more outreach efforts.

The message: Whooping cough is serious. About 1 in 5 infants who get pertussis will get pneumonia, and in some cases die.

Young children are supposed to get the vaccine against whooping cough, also known as pertussis, in several doses spread out over the first four to six years of life. Infants are particularly vulnerable as they don't yet have full protection against the disease.

By the time people reach their teens and early adulthood, the vaccine is wearing off. The best prevention is for adults and teens to get a booster shot. Gregoire emphasizes there's no excuse not to.

"I don't come in contact with infants often," she explained at a press conference last Thursday. "I'm sure others out there would say the same thing. I don't care. I made sure I have a current booster because I can come in contact with another adult; I can pass it on. It's up to us as adults to step up to the responsibility because our infants, our children, our babies are at risk."

The state is also making available 27,000 doses of the pertussis vaccine for adults who have no health insurance.

Whooping cough has been on the rise in the U.S. since the 1980s, but in the past two years, the CDC has noted an increase in young children. It is a highly contagious respiratory infection. Many adults may not know they're carrying the bacterium.

Washington Secretary of Health Mary Selecky says infected adults have symptoms similar to a common cold, usually followed by a persistent cough. It's the reason whooping cough is easily misdiagnosed in adults.

"Our symptoms are very different," she explains. "We don't get the same kind of coughing fit that a baby would get. We don't turn blue like a baby does when a baby has a coughing fit."

Whooping cough causes babies to cough violently. It forces them to inhale with a loud whoop — hence the name. Some babies have little or no cough, but they still may have difficulty breathing. It can be tricky to diagnose in them, too.

Washington's Department of Health is also reaching out to hospitals and health care providers. They want them to ask patients if their immunizations are current, and urge new mothers to get vaccinated.

If the current pace of infection continues, Selecky says the state could see as many as 3,000 cases this year.

"Bugs rule — there are more of them than people," she says. And bugs move much quicker than we do.