Accessibility links
Alzheimer's Patients Turn To Stories Instead Of Memories : Shots - Health News Storytelling can be a way of giving people with dementia a low-stress way to communicate, one that does not rely on their memories. And it can give caregivers a chance to reconnect with their loved ones. 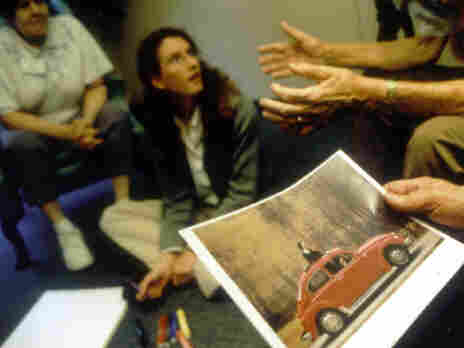 TimeSlips is a program based on the idea that storytelling can be therapeutic for people with dementia. Dick Blau/TimeSlips hide caption

Ask family members of someone with Alzheimer's or another dementia: Trying to talk with a loved one who doesn't even remember exactly who they are can be very frustrating.

But here at a senior center in Seattle, things are different.

On one recent day, 15 elderly people were forming a circle. The room is typical — linoleum floors, cellophane flowers on the windows, canes and wheelchairs, and walkers lined up against the wall.

Linda White is leading a session based on a program called TimeSlips. The idea is to show photos to people with memory loss, and get them to imagine what's going on — not to try to remember anything, but to make up a story.

Storytelling is one of the most ancient forms of communication — it's how we learn about the world. It turns out that for people with dementia, storytelling can be therapeutic. It gives people who don't communicate well a chance to communicate. And you don't need any training to run a session.

White walks around the circle holding up a stock photo of a fit elderly man. He's wearing a banana-yellow wet-suit vest and is water-skiing.

The man is smiling broadly at the camera, perfectly framed by a big arc of water.

"He's experienced and he's cool; he's happy," says White. "Look at the grin on his face." 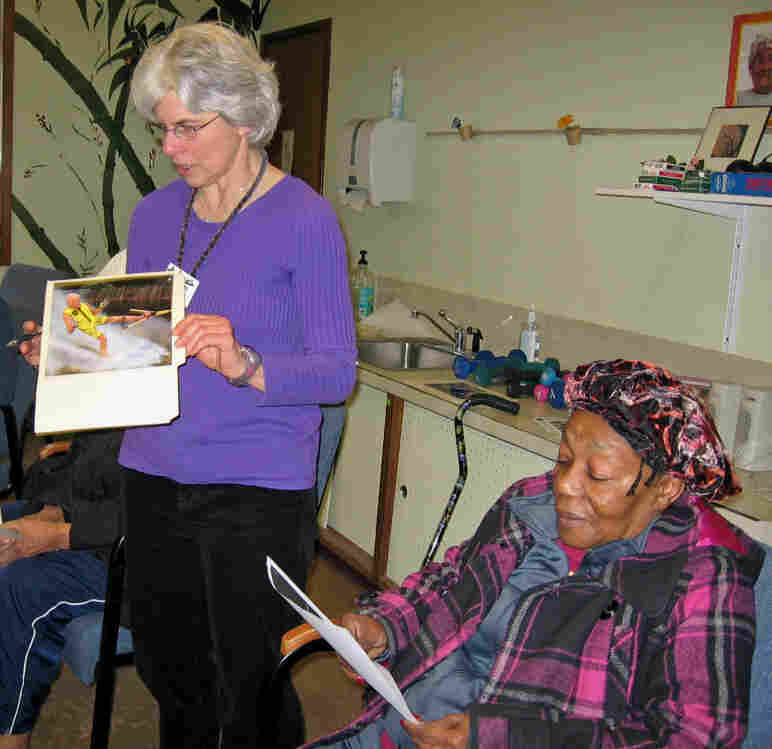 Linda White (left) leads a session based on a program called TimeSlips at a Seattle senior center. The idea is to show photos to people with memory loss to help them make up a story. Joanne Silberner for NPR hide caption

Many of the people in this group don't talk much on their own. But they're enthusiastic about making up a life story for the water-skier — he's a retired guy who's been divorced several times. He's got four children and a wife onshore, waiting to be taken out to dinner.

Most people with dementia live at home and don't have the opportunity for this kind of session, run by someone who's been trained to do it. But storytelling can be done at home, according to the founder of the program, Anne Basting.

"Anybody can do this," says Basting.

She directs the Center on Age and Community at the University of Wisconsin, Milwaukee. She started work on storytelling as a way to give people with dementia a low-stress way to communicate, one that did not rely on their memories. She sees it as giving caregivers a chance to reconnect with their loved ones.

"People with dementia start to forget their social role; they might not remember they're a spouse ... a parent," says Basting. "They need a social role through which they can express who they are, and the role of storyteller really supplies that."

One study co-authored by Basting in The Gerontologist, a journal, found that storytelling made people more engaged and alert, and that staff members at residential facilities had more positive views of their patients. An independent study published in Nursing Research showed participants were happier and better able to communicate in general.

Basting says one of the biggest hurdles to getting the program going has been skeptical family members.

"Resistance comes when people say, 'My dad would never do that; he's a very distinguished man. It's beneath him; it's childish,' " says Basting.

And then Dad hops right in.

Basting tells of one man who came to her in tears of thanks. For the past three years, he had been driving his wife crazy, trying to get her to talk about shared memories. He tried her on storytelling so they could talk about the story and play with the plot line. And eventually, he was able to communicate with her again.