Accessibility links
FDA Delays Sunscreen Label Redo : Shots - Health News Almost a year ago, the Food and Drug Administration proposed a slew of new rules to make the labels of sunscreens more helpful and realistic. To avert summer shortages, the agency has delayed implementation until December for most companies. 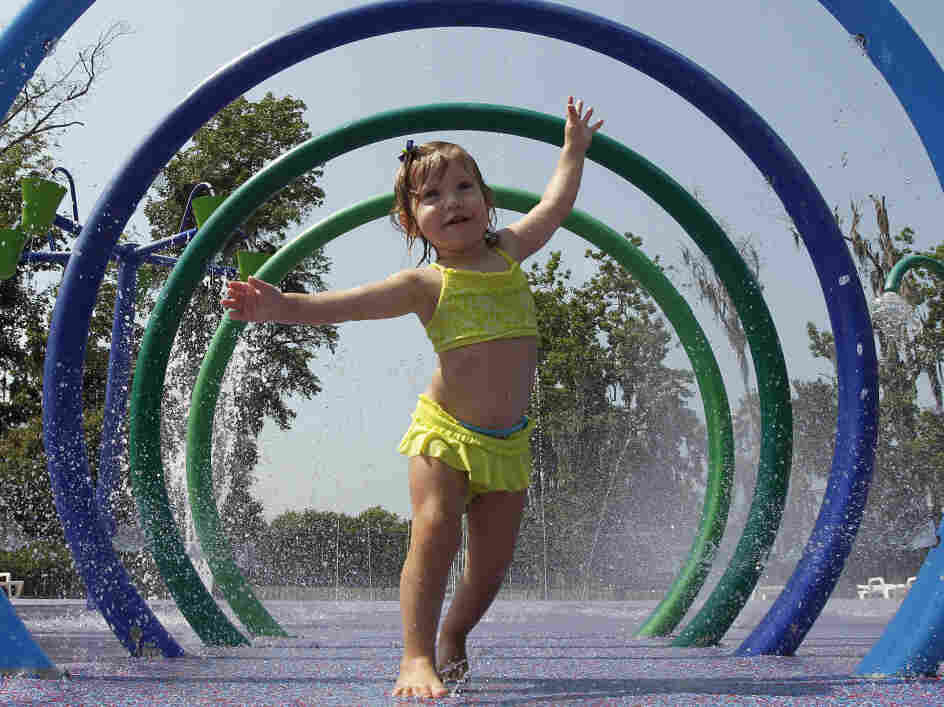 Alivia Parker, 21 months at the time, ran through circles of spraying water on a hot day in Montgomery, Ala., last June. She was wearing sunscreen with an SPF of 100, a rating that won't be allowed much longer. Dave Martin/AP hide caption

For a little while longer you'll still be able to buy suncreen labeled as waterproof or with a sun protection factor of 100.

Almost a year ago, the Food and Drug Administration proposed a slew of new rules to make the labels of sunscreens more helpful — and realistic. Sunscreen that says it's waterproof or has an SPF greater than 50 was supposed to be verboten by next month.

But after companies complained they'd have trouble complying in time, the FDA gave them a reprieve. The agency was concerned that without an extension some companies might stop making some sunscreens and that there could be a shortage of so-called broad spectrum sunscreens.

For most makers of the protective goops, sprays and lotions, the new rules will take effect in December. Small companies will have another year to get their products squared away.

Waterproof sunscreen, as you've probably discovered in your own experiments, doesn't really exist. Same for the allegedly sweatproof stuff. So those descriptions will be off limits, eventually.

Water-resistant sunscreen passes muster, and that will be OK on the new labels. But the makers will have to give you an idea of how long you can swim or sweat and still be protected against the sun.

The FDA's new rules would also require sunscreen makers to say how effective their products are in protecting against ultraviolet A (UVA), as well as ultraviolet B (UVB) rays, a longstanding measure. Both types raise the risk of skin cancer. UVA rays get deeper into skin and contribute to its premature aging. UVB rays put the burn in sunburn.

Only sunscreens that pass a new FDA test on UVA and UVB protection could say "broad spectrum" on the label after the rules take effect. The agency suggests people use a broad spectrum suncreen with an SPF of 15 or more to guard against the sun.

There are more than 2 million new cases of skin cancer in U.S. each year. Melanoma, the type that causes the most deaths, is expected to afflict more than 75,000 people this year and to lead to the deaths of almost 9,000, according to the American Cancer Society.

Despite the delay in the official rules, the FDA says you may start seeing new labels on some sunscreens anyway, as manufacturers that were ready to comply make the changes.