Accessibility links
Woman Who Tried To Commit Suicide While Pregnant Gets Bail : Shots - Health News A state court in Indianapolis granted a Chinese immigrant $50,000 bond in a case that has mobilized advocates for women's rights and abortion rights nationwide. The case could set a precedent for the prosecution of pregnant women whose infants die.

Woman Who Tried To Commit Suicide While Pregnant Gets Bail

Woman Who Tried To Commit Suicide While Pregnant Gets Bail 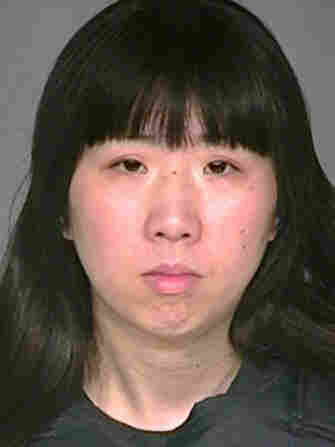 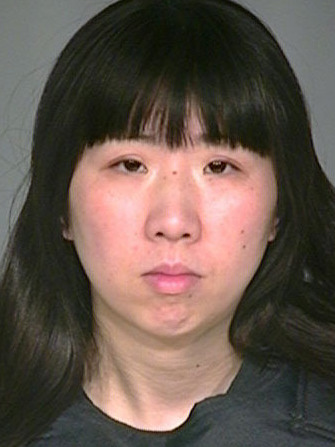 Bei Bei Shuai, seen in a file photo, was charged with murder in the Jan. 2, 2011, death of her 3-day-old daughter Angel Shuai, after eating rat poison.

Bei Bei Shuai is a step closer to leaving jail for the first time since March 2011, when she was arrested for the murder of her 3-day-old daughter Angel.

The girl, who was delivered by cesarean section, died after Shuai's unsuccessful suicide attempt in December 2010, while she was pregnant.

Today a state court in Indianapolis granted the Chinese immigrant $50,000 bond in the case, which has mobilized advocates for women's rights and abortion rights nationwide. They say the case could set a dangerous precedent for the prosecution of pregnant women whose infants die.

Meanwhile, Shuai herself has no money. "And she's had no chance to earn any because of being in jail for more than a year," Lynn Paltrow of the group National Advocates for Pregnant Women, which is among the groups representing her, told Shots. It will take $5,000 to get Shuai out on bail.

At issue are laws — now in force at both the federal level and in at least 36 states — that make it a crime to cause death or injury to a fetus. The idea driving passage of these measures was to recognize a second victim in crimes against a pregnant woman. In fact, the federal law is technically known as "Laci and Connor's law," in recognition of the murder of the pregnant Laci Peterson, a much-publicized crime in California in 2002.

"These laws were passed by the legislature to protect women from third-party violence, not to be used against women themselves," Emma Ketteringham, one of Shuai's lawyers, said, in a media briefing.

But the Indiana Court of Appeals didn't agree. In a 2-1 decision in February, the court, said Ketteringham, "made it quite clear that pregnant women are no different than third parties when it comes to their pregnancies."

Then last week, the Indiana Supreme Court refused to consider the case, letting the Appeals Court ruling stand. The Supreme Court, however, did order the bond hearing, which resulted in today's ruling.

The facts of the case are not much in dispute. In December 2010, Shuai, then 33 weeks pregnant, was devastated when her boyfriend abandoned her. She left a suicide note saying she intended to take her own and her baby's life, then ate rat poison.

Friends intervened and took Shuai to the hospital, where, her attorneys said, "she consented to every test and every procedure that she was told would ensure the safety of her baby."

The baby she named Angel was delivered by C-section on Dec. 31. At first everything seemed to go well, but Angel soon weakened and was taken off life support a few days later "with Ms. Shuai's consent and died in Ms. Shuai's arms," Kettering said.

After the baby died, Shuai suffered another breakdown and remained in the hospital for a month. She recovered and returned to work, but was arrested in March 2011 and charged with murder and attempted feticide. She has been in jail ever since.

Those who are fighting for Shuai say the case has serious implications. "The principle seems established for now that if you do something intended to end your pregnancy ... that is murder," said Paltrow. "A suicide attempt will be treated as a public health problem for everyone except pregnant women and for them it will be treated as a crime."

But it's not just suicide that could be at issue. The way the law is being interpreted, the American Civil Liberties Union argued in its friend of the court brief on Shuai's behalf, "any pregnant woman could be prosecuted for doing [or attempting] anything that may put her health at risk, regardless of the outcome of the pregnancy."

"according to the ways the laws are being applied here, the state of Indiana believes that any pregnant woman who smokes or lives with a smoker, who works long hours on her feet, who is overweight, who doesn't exercise, or who fails to get regular prenatal care, is a felon. And the list of ways these laws could be construed to unconstitutionally prosecute pregnant women goes on and on."

While prosecutors have said they have no intention of applying the law in circumstances like those, the abortion-rights group Reproductive Health Reality Check hosted a media call with Christine Taylor, an Iowa mother of two who was charged with attempted fetal homicide after falling down the stairs following an argument with her then-husband.

Although the charges were eventually dropped because her pregnancy was not far enough along under Iowa's law, the story made the local newspaper under the headline "Mother throws self down stairs to try to kill unborn baby," Taylor said. Even without a prosecution, she said, "my reputation, my good name was ruined."

Meanwhile, the groups now fighting to have women spared from prosecution under fetal homicide laws are turning to those who advocated for them in the first place — anti-abortion groups. Those groups, however, have been uncharacteristically quiet.

Neither of two of the more outspoken groups, the National Right to Life Committee nor the Susan B. Anthony List, would comment on the issue.