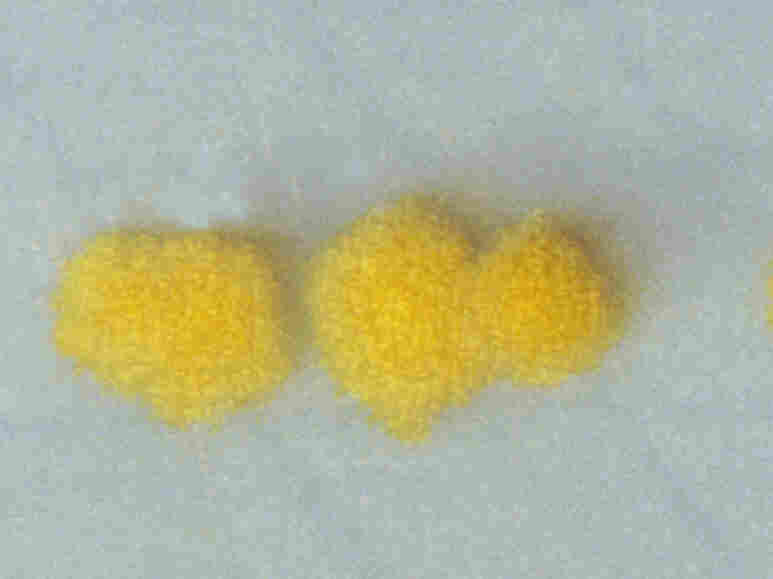 Colonies of Clostridium difficile look awfully nice, but they're definitely something you'd be advised to keep at a safe distance. CDC hide caption

The infections often strike the elderly, especially those who've been taking antibiotics that clear out competing bacteria in people's intestines. People sickened by the bug have persistent diarrhea that can, in severe cases, lead to dehydration.

C. diff, as it's known, is resistant to common broad-spectrum drugs and used to lurk mainly in hospitals. But as NPR's Rob Stein reported in March, more and more people are contracting C. diff elsewhere.

Mayo Clinic researcher Sahil Khanna and his colleagues have found that children are contracting the disease at ever-higher rates, too. And most of them are being infected outside of hospitals. He presented the findings at the annual Digestive Disease Week medical conference ending today.

Although C. diff infections were first documented in the late 1970s, Khanna tells Shots, "there haven't been any studies of children in and outside the hospital." So he and fellow researchers examined data from Olmsted County, Minn., where they had access to detailed records for the entire community, going back decades.

What they found, Khanna says, is a huge increase in infection rates. Between 2004 and 2009, the rate of C. diff infections among children was a whopping 12 times higher than it was between 1991 and 1997. Most of the infected kids had been taking antibiotics, which was no big surprise. But what was surprising was that 75 percent of them became infected outside of the hospital.

It's important to note that these results haven't been published yet. Khanna says a manuscript is just about ready for submission to medical journals.

The latest findings do jibe with a previous study, published in January, in which Khanna and colleagues found that about 40 percent of all C. diff infections are cropping up outside hospitals. The people infected out in the community also tended to be younger.

The CDC estimates that there are more than 300,000 cases of C. diff in the U.S. each year, causing about 14,000 deaths. A more toxic, more antibiotic-resistant strain appeared in 2000 and caused outbreaks in several cities, but Khanna says its not clear to what extent that strain might be related to the increases he's documented.

One way to avoid C. diff is to minimize the use of broad-spectrum antibiotics, which kill off healthy bacteria in your system and allow the resistant C. diff to move in. "To not take antibiotics if you don't need them, I think that's the big one," Khanna says. When a patient does need to treat an infection, he says, "they should probably be given targeted, narrow-spectrum antibiotics."

Another tip: wash your hands with soap and water. Alcohol-based hand sanitizers won't do the trick with C. diff.