Accessibility links
Compensating Organ Donors Becomes 'Talk Of The Nation' : Shots - Health News There's a persistent shortage of organs for transplantation in this country, and it's getting worse. Federal law bans financial incentives for organ donations. Is it time to reconsider? Some calls and emails from listeners illuminate the range of opinions on the controversial subject. 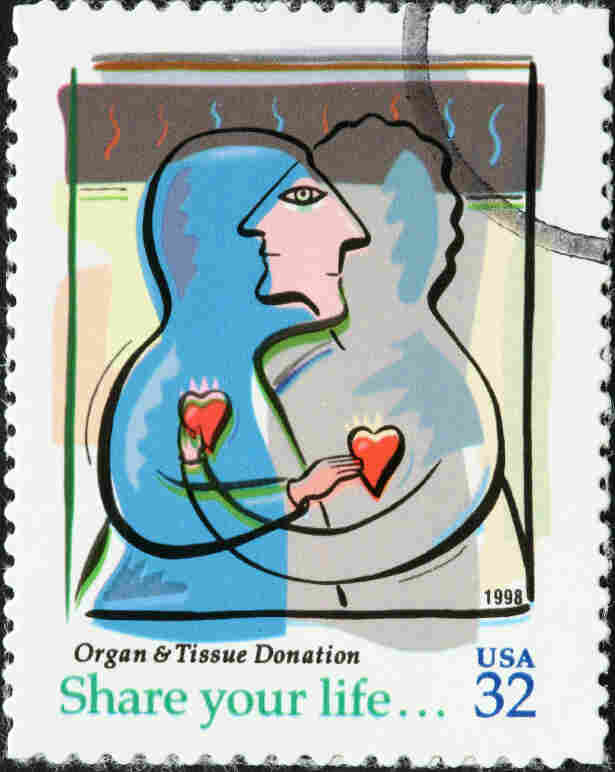 When we first kicked around the idea of asking people to share their opinions about compensating organ donors, it was pretty clear that we were on to something. Everybody in the newsroom seemed to have a strong feeling about it.

Our NPR-Thomson Reuters Health Poll found that about 60 percent of Americans would support modest compensation in the form of credits toward future health care needs of people who made donations while alive of kidneys, bone marrow and portions of liver.

Bioethicist Dr. Stuart Youngner, from Case Western Reserve's med school, and I joined Neal Conan on NPR's Talk of the Nation Tuesday to chat about the findings and hear from people across the country.

The callers helped give voice to the core issue. There's a persistent shortage of organs in this country, and it's getting worse. The rate of organ donations has fallen 2 percent since 2005, and the waiting list of recipients has grown 25 percent, Youngner pointed out.

Federal law bans financial incentives for organ donations. But is it time to reconsider?

Andrew from New Orleans told us about his father's search for kidney after a car accident 10 years:

"And I know we're desperately searching and on the lists and have had no avail. But I know if we had the chance to actually buy one, you know, and get us off of that waiting period, we would jump all over the - jump all over it to get him the kidney."

As Heard On Talk Of The Nation

The Ethics Of Compensating Organ Donors

The Ethics Of Compensating Organ Donors

Taber (spelled phonetically by our transcript service) weighed in from Tuscon with his experience as both a donor and recipient. He's got ligaments in one knee from a cadaver, and he's given bone marrow. When he gave bone marrow, he was out of work. All his expenses were covered, but he said there can be "hidden expenses," such as lost earnings or travel costs. So, he said:

"I think I personally would be against any kind of compensation for a deceased donor. But for living donors who actually have expenses and the like, I can definitely see some sort of limited compensation making a big difference."

By email, Michael in Casper, Wyo., said he's willing to donate his organs free of charge once he dies, but not before:

"I would not be willing to sell any of my organs. As soon as I'm clinically dead, then they can have what can be of use. But up until that point, I will keep what I have no matter what the monetary compensation might be."

For more, listen to the show or read the transcipt.