Accessibility links
Need A Nurse? You May Have To Wait : Shots - Health News A new poll finds 34 percent of patients hospitalized for at least one night in the past year said "nurses weren't available when needed or didn't respond quickly to requests for help." We asked nurses why that might be. Stories poured in about being overworked, comparing the job to "spinning plates." 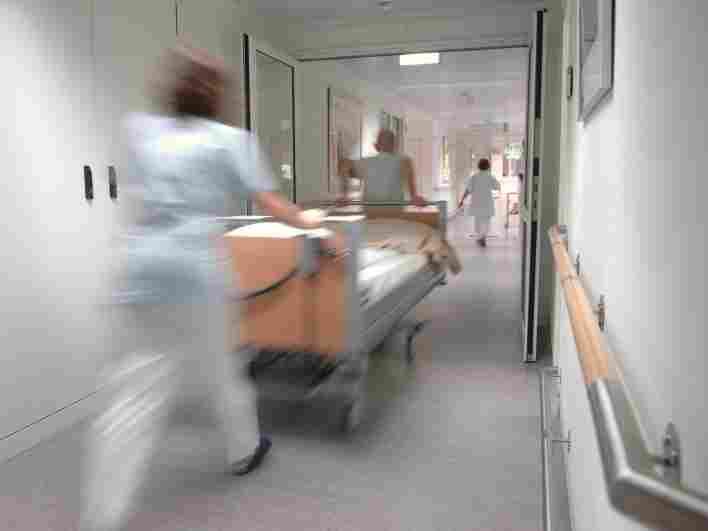 Some fear that with rising medical costs and an aging population, the country's nursing staff will be stretched too thin. iStockphoto.com hide caption 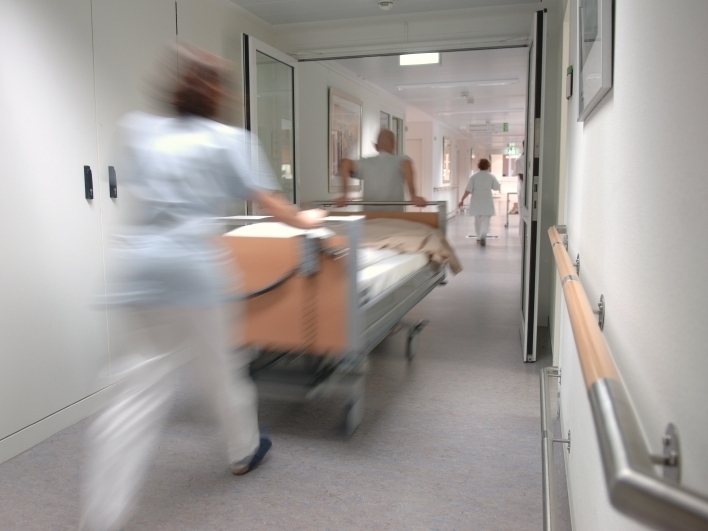 Some fear that with rising medical costs and an aging population, the country's nursing staff will be stretched too thin.

Nurses are the backbone of the hospital — just ask pretty much any doctor or patient. But a new poll conducted by NPR, the Robert Wood Johnson Foundation and the Harvard School of Public Health finds 34 percent of patients hospitalized for at least one night in the past year said "nurses weren't available when needed or didn't respond quickly to requests for help."

Since nurses provide most of the patient care in hospitals, we were surprised at the findings. We wanted to find out more. We wanted to know what was going on from nurses themselves. So we put a call-out on Facebook.

We received hundreds of responses and read them all: piles of stories about nurses feeling overworked, getting no breaks, no lunches and barely enough time to go to the bathroom. Even worse, many nurses say breaks and lunchtimes are figured into their salaries and deducted, whether they take them or not.

When we asked nurses who responded to our call-out if we could interview them for broadcast, most said no. They worried about their employers' reaction. Many would be interviewed only anonymously.

"We're always afraid that something will happen to our patients during the time we're off the floor," one nurse says, "and I personally don't feel comfortable leaving them unless I know that a co-worker is actually looking after them during the time that I'm off the floor."

This nurse says she rarely stops. Not for 12 hours. She's an emergency room nurse in a busy urban hospital. The ideal, she says, would be one nurse for every three patients in her ER. But she typically cares for five patients or more — often eight, if she's covering for a colleague taking a lunch break. She says there are times when she can't leave patients' bedsides.

"Maybe I was injecting medication that you have to push slowly over five to 10 minutes so it doesn't harm them," she says, "and I can see the call bell going off in the hallway, and there's no way I could respond to that."

The only option is to literally yell down the hallway and hope another nurse hears her and responds to the patient call bell. There have been times when she has driven home at the end of her 12-hour shift, white-knuckling the steering wheel and wondering whether she "missed something."

Another nurse likens her job to "spinning plates," just "praying," she says, that one doesn't fall. "And these are human beings," she says, "not products on conveyor belts."

Stories like this suggest there's a shortage of nurses. But Linda Aiken, a researcher and professor of nursing at the University of Pennsylvania School of Nursing, says that's not the case. There was a shortage about a decade ago, she says. Today, that has changed. The number of RNs graduating has increased dramatically over the past decade, but many can't find jobs.

"There's not an actual nursing shortage," Aiken says. "There's a shortage of nursing care in hospitals and other health care facilities."

That is terrific, of course, but it's not cheap. Any reduction in nurse staffing at a time of increasing patient demand jeopardizes patient care, Aiken says.

"Nurses are the surveillance system in hospitals for early detection and intervention [to save patients' lives]," she says.

According to one nurse, little clues from patients are critical.

"I mean, you might walk into a room, and they are breathing and answering your questions," the nurse says, "but if you look at their neck and the jugular vein is slightly distended ... taking the time to pick up on the small details like that are the early warning signs that somebody is getting sicker fast."

It's not all bad news, but with a rapidly aging population, the fear is that the nursing staff will be stretched even more thinly. Plus, while our call-out to nurses on Facebook was not scientific, the NPR/RWJ/Harvard poll is, and it does point to significant problems when it comes to the availability of nurses at the hospital bedside.

A previous Web version of this story gave some incorrect poll numbers. For people who were hospitalized overnight, 51 percent, not 47, were "very" satisfied with their care; 32 percent, not 39, were "somewhat" satisfied.