Accessibility links
Dispatchers' CPR Coaching Saves Lives When Every Minute Counts : Shots - Health News Your chances of surviving a sudden heart attack may depend on where you live, in part because of the 911 dispatcher. If a dispatcher gives CPR instructions over the phone, the rate of survival goes up. There's now a push to make it universal, but some cities are slow to implement the necessary training. 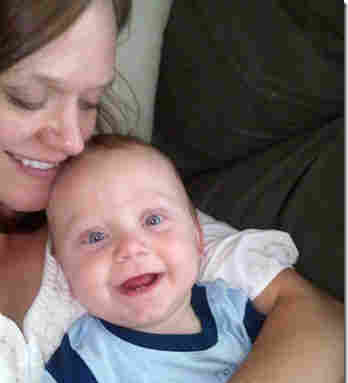 Becky Cole was eight months pregnant with her son Ryan when she passed out. Her husband performed CPR for six minutes with the help of a dispatcher before medics arrived. Courtesy of Medic One Foundation hide caption

Your chances of surviving a sudden heart attack may depend on where you live; some American cities have survival rates five times higher than others. One difference can be 911 dispatchers.

If they coach someone over the phone to give CPR, the chance of surviving goes up. There's now a push to make it universal, but some cities are slow to implement the necessary training.

Becky Cole was eight months pregnant with her fourth child when she collapsed against the bathroom door. It was January 2011 in the Seattle suburb of Woodinville.

"I got up to go brush my teeth, and that's the last thing I remember," she says.

Her husband, Jon, heard the loud crash and called 911.

"She's fallen down, and she doesn't look like she's breathing. I need an emergency ambulance right now," he told the dispatcher.

What happened next is typical in many cities across the country, but it's not nearly as universal as you might expect. When Jon Cole explained that his wife was unconscious and appeared to not be breathing, the dispatcher instructed him on how to perform CPR.

He switched to speakerphone and the dispatcher led him through the process, step by step.

"I was so worried about doing it wrong that I clung to every word that dispatcher said. Because this is my wife, this is my best friend," he says.

Soon, the medics arrived and took over, but Jon Cole had kept her blood flowing with CPR for six minutes.

"Every minute of delay, the likelihood of survival falls by 10 percent. So, you can do the math," says Dr. Mickey Eisenberg, medical director for emergency response in King County, Wash.

Back in 1981, he launched an experiment in the Seattle area, using emergency dispatchers to coach CPR. He was inspired by a pioneering program in Phoenix. He says one hurdle to giving instructions over the phone, in a panic situation, is using the right words.

"Such things as 'center' versus 'middle' versus 'half-way down.' All these things evoke different images," Eisenberg says.

Another huge challenge is figuring out for sure, over the phone, that the person's heart really has stopped. In many cases, there's an illusion of breathing, like a "last gasp." That happened with Jon and Becky Cole. Becky Cole gasped, and her husband told the dispatcher she was trying to breathe.

"That doesn't sound like breathing," the dispatcher told him. "We're going to have to still keep on going on this, OK?"

Eisenberg says recognizing normal breathing is the focus for a lot of training at the 911 call center.

"To an untrained person, they think the person is breathing, but they are not breathing normally," he says.

The call center training paid off right away. CPR rates in those first critical minutes went up by 50 percent across King County. Hundreds of cities have adopted similar programs.

But many still have not, and some have been slower to come around. For example, in Oak Creek, Wis., outside Milwaukee, paramedic Jerry Biggart says he used to pester his bosses about starting a program, but they gave him excuses. The said they would do it once the state mandated it, but otherwise they told Biggart they did not have the resources to do it.

Today, those bosses are retired, and Oak Creek decided it's actually not that expensive to train everyone in the call center. Plus, CPR has gotten simpler and easier to explain, since bystanders don't need to perform mouth-to-mouth anymore. Still, the dispatchers were concerned at first.

"Just because you're talking to people during the most critical incidents," Biggart says, "but it turns out that they really enjoy playing in that role."

And possibly saving a life — while giving a bystander a way to be helpful, instead of just waiting anxiously for the medics to arrive. In fact, Biggart thinks every state should make it a requirement for the local emergency dispatch systems.

The American Heart Association has stopped short of proposing regulations, but recently urged every city and county to voluntarily have its 911 dispatchers coach CPR over the phone.

Dr. Brooke Lerner, a professor of emergency medicine at the Medical College of Wisconsin, says having operators give coaching is a good way to increase the number of bystanders who take action.

"We need to move people away from feeling like if they haven't had a class that they're going to hurt somebody," she says, "to understanding that if they don't do something, people are going to die — and that it's as simple as putting your hands in the middle of their chest, and pushing hard and fast."