Accessibility links
Keep Kids Away From Laundry Detergent Packs : Shots - Health News Single-use packages of laundry detergent are causing problems for kids who eat them. There have been at least 250 cases of illness from the packs reported to poison control centers across the country already this year. 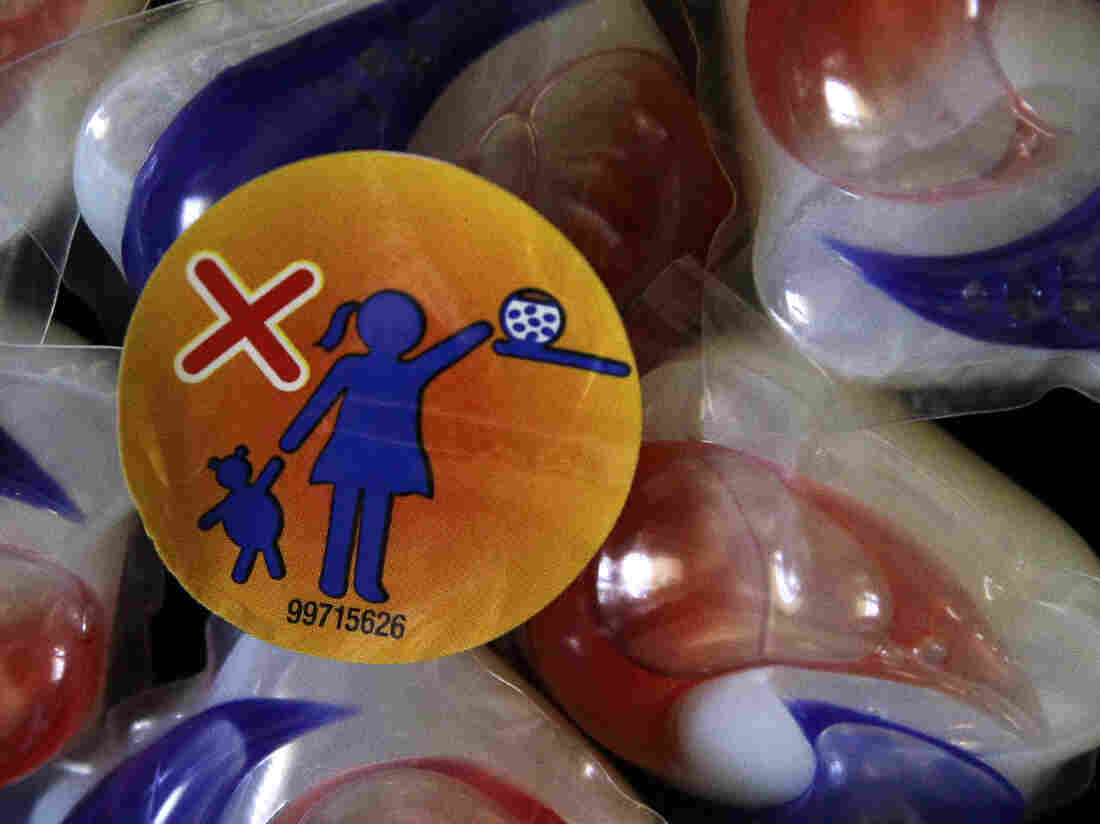 A label on a package of Tide laundry detergent packets warns parents to keep them away from children. Nearly 250 cases of illness from such packets have been reported to poison control centers this year. Pat Sullivan/AP hide caption

Something that looks good enough to eat can sometimes turns out to be a really big mistake.

Take those small, brightly colored single-use packs of laundry detergent that are becoming popular. To a curious toddler or small child, they look like candy.

But once inside childrens' mouths, the tempting packs can burst, releasing a concentrated blast of irriitating detergent. Already this year there have been at least 250 cases of illness from the packs reported to poison control centers across the country.

And the particulars of the illnesses are worrisome. Children vomit. More than you would expect, says Dr. Michael Beuhler, medical director of the Carolinas Poison Center in Charlotte, N.C. And the kids often get much sicker in a hurry. "Children grow excessively tired and lethargic," he tells Shots. Some then develop so much trouble breathing they need help from a ventilator.

"We don't have a good handle on exactly what's going on," he says. But the symptoms are worse than with other types of detergent that kids ingest. One hypothesis, he says, is that something in these detergent packs is acting like a strong, short-acting sedative.

Within a few hours those symptoms usually pass. The prognosis for kids is very good overall, he says, assuming they get prompt medical care. "It's really just a matter of supporting their breathing for that short period of time," he says.

There haven't been any reports of deaths, but an analysis of the data from poison control centers continues. The specific hazards posed by the detergent packs were only recognized this month.

Buehler says parents need to treat the detergent packs with respect. "They can't be left where a child can find them," he says.

For its part, Procter & Gamble, maker of Tide Pods, said Friday it would add a double-latch to the containers of pods as a safeguard. Those will show up in stores starting in July.

For what it's worth, injuries to kids from household cleaning products dropped by almost half to about 12,000 in 2006 from around 22,000 in 1990. Kids between 1 and 3 years old remain the most vulnerable, accounting for almost three-quarters of the cases.