Accessibility links
Patients Crusade For Access To Their Medical Device Data : Shots - Health News Heart implants supply doctors with data that can tell them a lot about a patient's health. But that information isn't directly available to patients. Now some patients are on a mission to get faster access to information about their hearts. 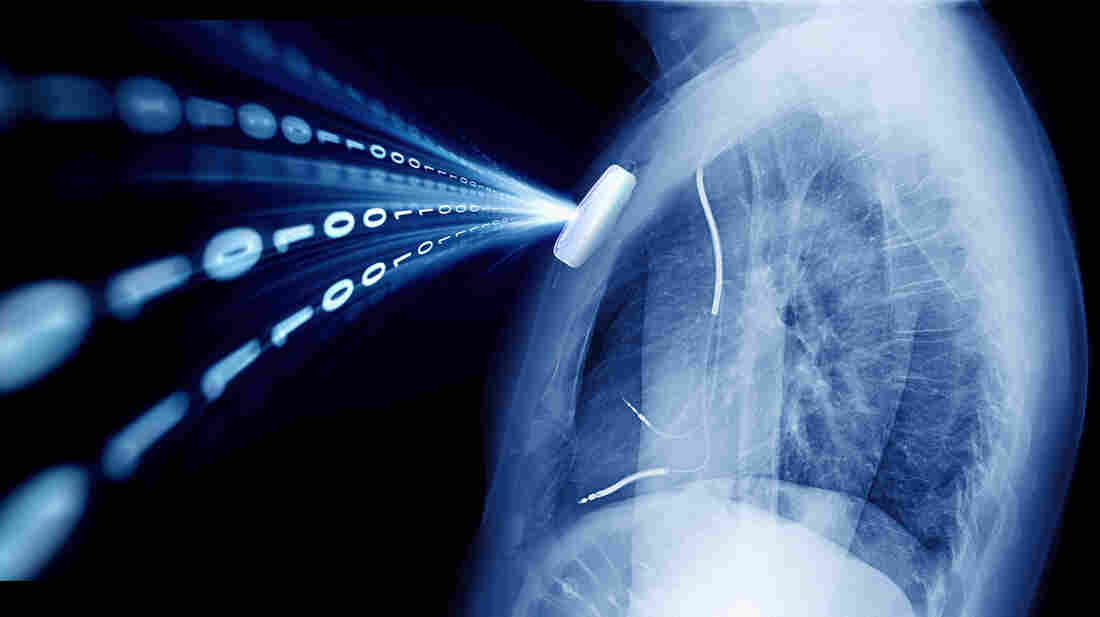 Each year, tens of thousands of Americans are implanted with tiny battery-controlled devices that regulate the beating of their hearts. Those devices transmit streams of medical data directly to doctors.

But some patients, like Hugo Campos of San Francisco, fear they're being kept out of the loop.

Campos has a genetic heart disease called hypertrophic cardiomyopathy, which means the muscles of his heart are too thick. It's the same disease that causes 17-year-olds to suddenly drop dead on the soccer field.

A few years ago, the disease was diagnosed, and Campos was implanted with an ICD — an implantable cardioverter-defibrillator. The device saved his life one morning when he nearly collapsed on the street.

At first he felt weak, like he was going to pass out. But as his heart went into overdrive, the device kicked in, coaxing his heart back to its normal rhythm.

"You feel the blood rushing to your head," Campos says. "It feels great. Life feels great."

Campos has had other scares since then. He lives in constant proximity to death. And that's left him with a powerful desire to know everything about his health. He wears a FitBit pedometer, sleeps with a sleep monitor, and checks his blood pressure constantly.

But unlike those devices, the ICD is a mystery to him.

That's because even though Campos' ICD can wirelessly transmit data twice a day about his heart and the ICD itself, that information goes only to his doctor. Campos has to make an appointment and ask for a printout. And that, he says, just doesn't seem fair.

"It's my body, my life, my health. Why shouldn't I have access to do as I please with this data?" Campos says.

This has become his crusade, and that of a growing movement of people who call themselves "e-patients." They want access to all kinds of medical data.

But with ICD patients there seems to be an added urgency, in part, because when the device kicks in, it isn't always as painless as it was for Campos that day.

ICDs can also defibrillate the heart with a powerful and excruciating shock. In rare cases, this has happened to some patients unnecessarily.

Campos says he just wants to know as much as he can about his ICD — how well it's working, what it's detecting in his heart. 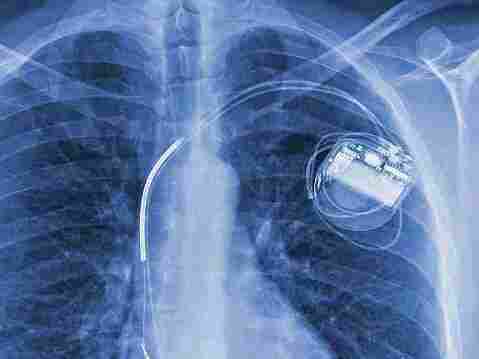 A few years ago, Hugo Campos was diagnosed with a heart condition. Then he received an implantable cardioverter-defibrillator, or ICD, shown here in his X-ray. Courtesy of Hugo Campos hide caption 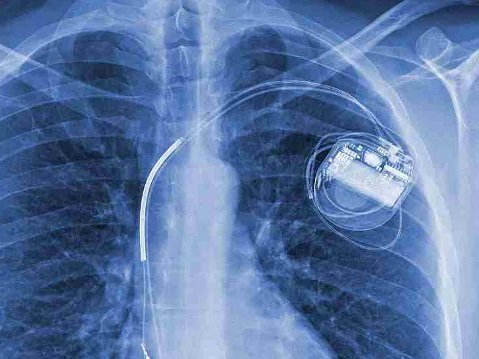 A few years ago, Hugo Campos was diagnosed with a heart condition. Then he received an implantable cardioverter-defibrillator, or ICD, shown here in his X-ray.

He even wrote a song, based on an old civil rights anthem, and posted it online.

"You know, Hugo is a remarkable guy," says David Steinhaus, medical director of the Cardiac Rhythm Disease Management division at Medtronic, which makes Campos' device. "We don't get very many requests like this."

Steinhaus says, in principle, the company is fine with giving patients their data directly. The problem is how to format it so it's useful to everyone. As is, the raw data is highly technical. Would patients understand it?

"You want to do it in a way that makes sense for the patient, that they can interpret correctly, so they don't generate a lot of angst and difficulty for the physician or anyone else," Steinhaus says.

Steinhaus says Medtronic is exploring ways to get Campos his ICD data. Campos says after two years of asking, he'll believe it when he sees it.