Accessibility links
Small Change In Reading To Preschoolers Can Help Disadvantaged Kids Catch Up : Shots - Health News Researchers say that changing what 4-year-olds see and think about when a book is being read can improve kids' reading skills later on. The key: Focus their attention on the words instead of the pictures.

Listen · 8:21 8:21
Small Change In Reading To Preschoolers Can Help Disadvantaged Kids Catch Up 8:21 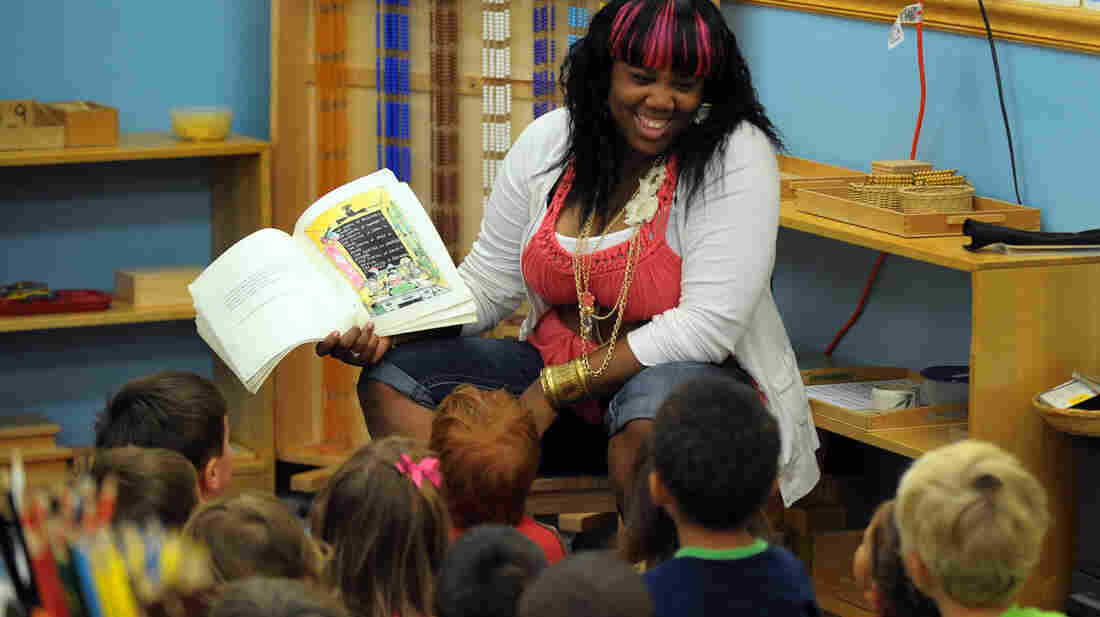 Kimberly Payton, a teacher at the Small Savers Child Development Center, reads to a group of preschoolers in Washington, D.C., in 2010. Researchers say that teachers who make small changes in how they read to 4-year-olds can improve kids' reading skills later on. Ricky Carioti/The Washington Post/Getty Images hide caption

On a recent Monday morning in Washington, D.C., a group of 3-year-old preschoolers bumbled their way into a circle, more or less, on the rug of their classroom. It was time to read.

The children sat cross-legged as their teacher, Mary-Lynn Goldstein, held high a book, Don't Let the Pigeon Drive the Bus. There was a short conversation about pigeons, then, for reasons that weren't entirely clear, cows; and then Goldstein began to read. She read as most teachers read, occasionally stopping to ask a question, point out a picture or make a comment about the story.

In other words, it was a familiar scene — a scene that, on that very day, likely took place in every preschool classroom in the country. Preschool teachers do this, and have been doing it for decades.

"The thought was you read to children — that will make a big difference in how well they read later on when they're in school," says Anita McGinty, an education researcher who works at the University of Virginia's Curry School of Education. "That's still probably the biggest message out there: Read to young children."

But about 15 years ago, says McGinty, researchers like her started to look more closely at reading, trying to unpack exactly which behaviors helped children learn to read. In the process, she says, they discovered something surprising about the simple act of sitting down and reading a story through with a child. "It mattered a lot less than we thought it did," she says.

It's not that reading didn't help a child to learn. It helped to build a child's vocabulary, for example. But it didn't necessarily improve a child's ability to read, per se.

To figure out why, researchers embarked on a new round of studies — specifically, eye-tracking studies.

"What they would do is that they would put a child on their parent's lap, and then they would use some special equipment that allows them to pinpoint exactly where the children are looking at any given moment in time," says Shayne Piasta, a professor at Ohio State University.

They found that when you simply read a book to kids, they tend to ignore the print on the page. More than 90 percent of the time the children are focusing on the pictures, or they are looking up at the parent, she says.

Here, went the theory, was the answer: Learning to read is an incremental process; you become familiar with letters, then words; the practice of reading from left to right; and eventually you put all that together and begin to read. But if a child's attention isn't drawn to the printed word, then reading to a child won't necessarily make them more familiar with what it means to read.

And so new questions emerged. How could teachers change what children saw and thought about when a book was being read? And how much difference would that make? If disadvantaged children who often have reading troubles were made to think more about print at a very young age, would they become better readers later on?

Reading Changes Made A Difference To Children

To answer these questions, McGinty, along with Piasta and a researcher named Laura Justice, designed a research study to look at the effects of modest changes in the way preschool teachers read to children. McGinty and her colleagues decided to target disadvantaged preschoolers because they frequently end up with reading issues.

For the study, they gave two groups of preschool teachers books for an entire school year — 30 weeks' worth of books. One group was told to read the books normally; the other was given weekly cards with specific questions the teacher could ask — really just small phrases — that might momentarily draw a child's attention to the print on the page.

The teachers were told to read their books four times a week, and to point out the print in this way between four and eight times, so that together the small phrases hardly added extra time to their reading sessions — maybe 90 seconds per book.

It is hard to imagine that such a small adjustment would make any difference. It was a series of moments, questions and gestures. How much could that do?

So far, the kids have been followed for two years. They are now in first grade, and according to the most recent findings, which were published in the journal Child Development, even these small changes make a measurable difference.

"Children who focused their attention on print ... had better literacy outcomes than those who did not," says Piasta. "It was very clear."

Understanding The Details Of Learning

But how much should we trust this? Positive results from interventions like this frequently are lost over time, overwhelmed by the reality of bad schools and poor support at home. This was, after all, such a modest adjustment.

The question is almost a philosophical one: How big a difference can small changes make?

The fact is, this study is part of a broader effort that's been going on in education research for the past 20 or so years. Education researchers are attempting to break down in minute ways how teachers (and parents) should interact on a moment-to-moment basis with children in order to promote their learning.

It's one focus of the field right now, and there have been some encouraging findings. But it's still not clear whether interventions like this have real staying power.

"Findings like this are at a very high risk of fading out," says Scott McConnell, a professor of educational psychology at the University of Minnesota. "But let's talk about why they might fade out. There's no reason to believe that an intervention like this, provided to 4-year-olds, is all these kids will ever need. They are going to need sustained intervention that takes advantage of the growth that they've achieved here."

Without other programs, gains are easy to lose, he says. He also points out that it's hard to implement preschool programs like this broadly, because at the preschool level there's wide variety in teachers' skills.

But he still believes programs like this are important. It's simple, he says: "As the twig is bent, so grows the tree."