Accessibility links
What's Different About The Brains Of People With Autism? : Shots - Health News There's growing evidence that the difference involves the fibers that carry information from one part of the brain to another. Brain scans of people with autism show a lack of synchrony between different areas of the brain. 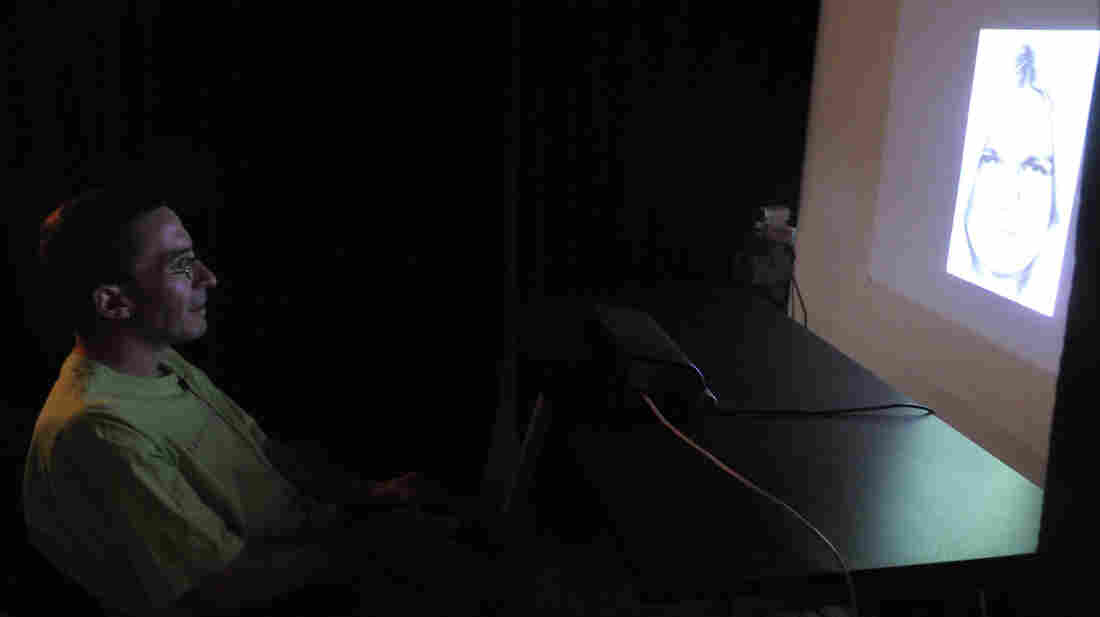 Jeff Hudale, who is autistic, demonstrates a face recognition test at the University of Pittsburgh in 2010. Researchers use eye tracking devices to monitor and record what he is looking at. Rebecca Droke/Pittsburgh Post-Gazette hide caption 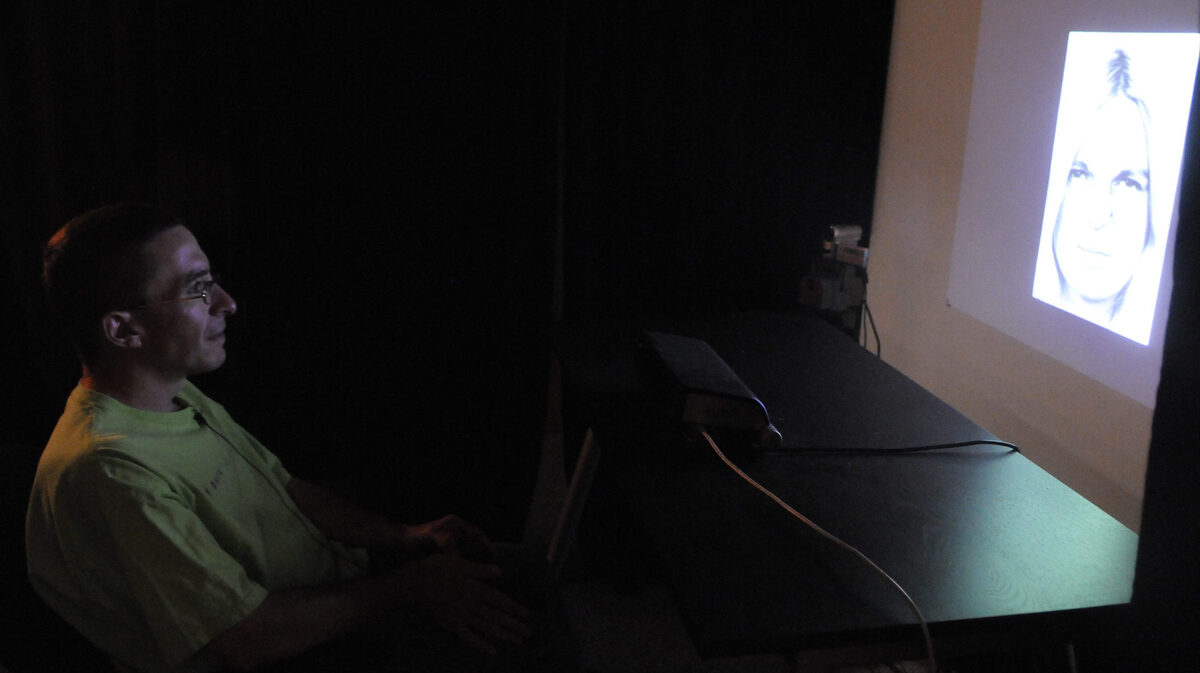 Jeff Hudale, who is autistic, demonstrates a face recognition test at the University of Pittsburgh in 2010. Researchers use eye tracking devices to monitor and record what he is looking at.

Like a lot of people with autism, Jeff Hudale has a brain that's really good at some things.

"I have an unusual aptitude for numbers, namely math computations," he says.

Hudale can do triple-digit multiplication in his head. That sort of ability helped him get a degree in engineering at the University of Pittsburgh. But he says his brain struggles with other subjects like literature and philosophy.

"I like working with things that are rather concrete and structured," he says. "Yeah, I like things with some logic and some rules to it."

So Hudale, who is 40, does fine at his job at a bank. But he doesn't do so well with social interactions, where logic and rules aren't so obvious.

"Most people my age are nowadays married," he says. "But me, not only am I totally single, I've never even had a date."

What Hudale has done for the past 25 years is help scientists understand autism — by letting them study his brain.

Hudale's career as a research subject began in 1985. He was 13 and had just been committed to the Western Psychiatric Institute at the University of Pittsburgh, where he was misdiagnosed as a schizophrenic.

During his stay, a neurologist named Nancy Minshew ran some tests on Hudale and realized that his real problem wasn't schizophrenia; it was autism.

She and her colleagues also realized that even though Hudale was still a teenager, his intelligence and curiosity about what was going on in his own brain made him a great candidate for research studies.

So not long after Hudale returned home, Minshew and other researchers began asking him if he'd be willing to take part in some experiments. Hudale says he didn't hesitate.

"When I first started learning what this is really about I thought — if I can get some benefit to help my health out that would be great," he says. "But now I realized this not only helps me, but it can help other people with similar troubles, and I'm all for it."

So Hudale said yes to just about every scientist who asked him to participate in an autism study.

That was back in the mid-1980s, when researchers still considered the human brain a sort of black box because there was no way to watch the activity going on inside.

"How do you open that black box? How do you know what a person is thinking? How do you do it? It was just not approachable," he says. "And then the magic happened. In the late '80s and early '90s it became possible to image brain activity."

So-called functional MRI scans and PET scans began to show which parts of the brain become active when people see pictures or read words or think about certain things.

But scientists didn't start applying these technologies to autism until the late 1990s, when the National Institutes of Health began to pour tens of millions of dollars into autism research.

By this time, Just had teamed up with Minshew, the neurologist who'd helped diagnose Hudale more than a decade earlier. The two researchers suspected that images of working brains could show how the brain of a person with autism is different.

But to find out, they needed lots of people with autism who would be willing to lie in the noisy tunnel of an MRI tube and perform mental tasks over and over. And that's where people like Hudale became really important.

Just says scans of people without autism have showed him that in a typical brain, the activity in areas near the front is synchronized with the activity in certain areas toward the back.

"It was obvious that they were working together," says Just. "I mean we all knew in some vague way that the different parts of the brain would work together, but to find this sort of beautiful rhythmic dance together was a very eye opening moment."

When he began to study the brains of people with autism, Just realized that beautiful rhythm wasn't always there.

"There was this lack of synchrony between the frontal areas and posterior areas," he says.

And the lack of synchrony became quite clear when people with autism did mental tasks in the scanner like remembering faces. Just says that process usually involves many parts of the brain working together.

"It's one thing to recognize the visual pattern, it's another, for example, to associate the emotional response to a face," Just says. "Is it a pleasant one? Is it somebody you know and like, and so on and so forth."

Combining visual and emotional information requires areas in the front of the brain to communicate instantly with areas in the back of the brain. And that's what you see in someone with a typical brain.

But in the brain of someone like Jeff Hudale, Just says, there would be less communication and coordination.

That makes sense, given the vast amount of research showing that people with autism often pay less attention to faces and have difficulty reading emotions in them.

Just and his colleagues soon came to believe that the problem could be traced to fiber tracts that connect key areas in the front of the brain to key areas in the back. The connections just weren't good enough.

Just says it helps to think of the brain as being a bit like the Internet.

"The Internet would be nothing without cabling and wi-fi," he says. "It's the fact that we have this fabulous connectivity that lets our smartphones and computers connect to each other and get information back and forth quickly."

Hudale has a more succinct version of what's become known as the "underconnectivity theory of autism."

"Well, I'll put this to you simply, like, if I'm messed up it's because my wires are messed up," he says.

When Just and Minshew first proposed the underconnectivity theory a few years ago, it attracted some skepticism. But recent evidence supports the theory.

For example, a new type of scan that shows the fiber tracts connecting various parts of the brain confirms that some of the tracts are less robust in people with autism.

If connections really are the problem, there are tantalizing hints of a partial solution. A study of dyslexia has shown that when people do mental exercises that use certain fiber tracts, the connections get stronger.

Hudale says he's not sure whether mental exercises will help people with autism. But he says he'll keep volunteering for autism studies until something does.

"I don't want to quit until they finally can get this set right and get this thing eradicated," he says. "I'd like to have some semblance of, just be a regular person like everybody else.