Accessibility links
Drug-Resistant Tuberculosis A 'Serious Epidemic' In China : Shots - Health News More than 10 percent of the new cases of tuberculosis diagnosed in China each year are resistant to the mainstay drugs used to treat the illness. The sobering findings come from the first national survey of the disease conducted there. 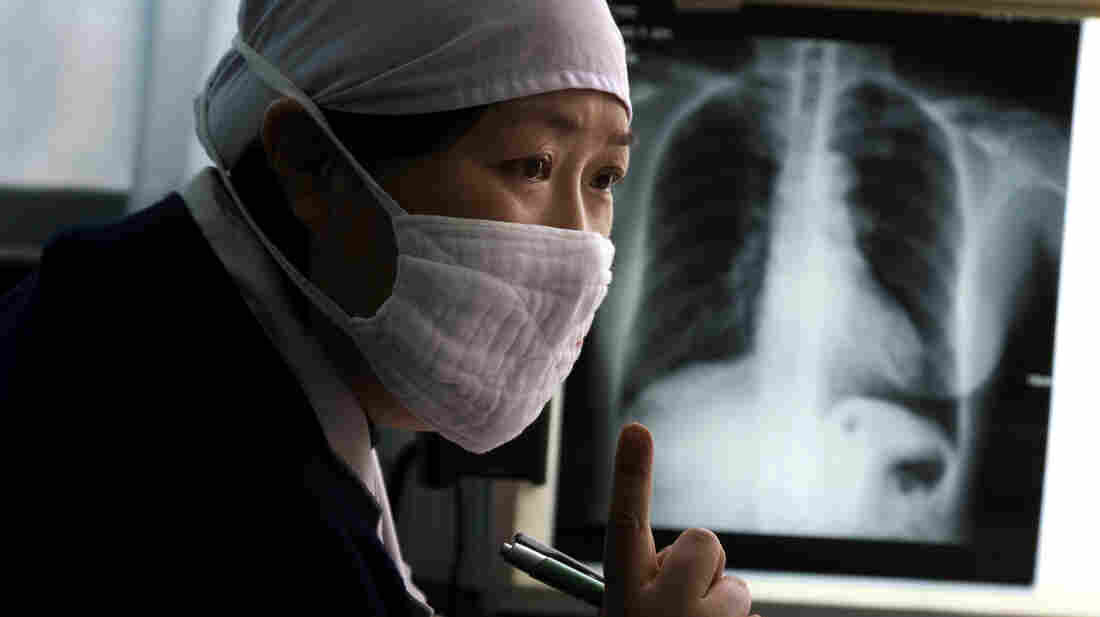 Gao Weiwei, a doctor of the Beijing Chest Hospital which specializes in the treatment of tuberculosis, talks to a patient suspected to have tuberculosis at the hospital in Tongzhou, near Beijing, March 27, 2009. Ng Han Guan/AP hide caption

China's first national survey of tuberculosis has produced some of the worst TB news in years.

Out of the million Chinese who develop TB every year, researchers say at least 110,000 get a form that's resistant to the mainstay drugs isoniazid and rifampin. Patients with such multidrug-resistant or MDR tuberculosis have to be treated for up to two years with expensive second-line drugs that are toxic and less effective.

Worse yet, the new survey shows that at least 8,200 Chinese are coming down with extensively resistant or XDR-TB. That means it's also resistant to at least two of the second-line drugs — and thus may be incurable in many cases.

And still worse, most of these resistant cases are being passed from patient to patient. So drug-resistant forms of TB are circulating in the community, they're not just being created one patient at a time when an individual doesn't get a full course of the right drugs (although that's happening too).

"The results of this nationwide survey in China confirm that the country has a serious epidemic of drug-resistant tuberculosis," write study authors, who mostly work at the Chinese Center for Disease Control and Prevention, a government agency.

Writing in the New England Journal of Medicine, the researchers report that a third of new TB cases and half of patients with previously treated TB have drug-resistant forms.

"China has the highest annual number of MDR tuberculosis in the world — a quarter of the cases worldwide," the Chinese experts note in a forthright statement that bears no trace of muting the problem for the sake of national pride.

The report also pulls no punches in describing how TB in China got to such a state.

First, the antiquated sputum tests China uses to diagnose TB fail to detect cases as often as 70 percent of the time. Much better tests are available.

The Chinese strategy of detecting resistant TB cases is also wrong, say Dr. Richard Chaisson and Dr. Eric Nuermberger of Johns Hopkins University in an accompanying editorial. By focusing on high-risk patients — those who don't respond to first-line treatment or relapse after treatment — the Chinese are missing many opportunities to quench resistant infections in unsuspected cases.

Second, Chinese researchers say few patients there have their TB strain tested for resistance before they begin treatment with standard, first-line therapy. Since many already harbor resistant bacteria, that guarantees treatment will fail — and perhaps promote a higher degree of resistance meanwhile.

Third, more than 40 percent of patients discovered to have multidrug-resistant TB don't finish their course of treatment. So they're back out in the community spreading resistant forms.

And even the Chinese hospitals that specialize in TB are doing a lousy job. In fact, patients treated in such hospitals are 13 times more likely to have MDR-TB than those treated elsewhere. That may be because they had MDR-TB when they were admitted, their hospital treatment was substandard or they acquired MDR-TB from other hospitalized patients.

Chaisson and Nuermberger call the new results sobering. "Creating the capacity to make an accurate diagnosis of MDR tuberculosis and to treat the patients with this disease appropriately," they write, "is a monumental task but one that cannot be avoided."

The Chinese survey did not turn up evidence of so-called XXDR or extra-extensively drug-resistant TB, sometimes loosely called "totally drug-resistant TB" (possibly, and hopefully, a misnomer). Its hallmark is resistance to three first-choice drugs and all nine second-line drugs. That may be because the Chinese survey was done in 2007, when only two cases of XXDR had been reported, in Italy.

In 2009, another 15 cases of XXDR were discovered in Iran, and last January, doctors in Mumbai reported a dozen more.

Earlier this week a 13-year-old girl who was among those Indian cases died from the disease. She was the fourth known death among the 12. And as reported by New Scientist, six others are still under treatment, and three have reportedly dropped out of medical care.

That's encouraging, but it's not yet clear how delamanid should be combined with other regimens. The Hopkins experts point out that few drug companies are interested in testing their drugs in tandem with those from competitors.