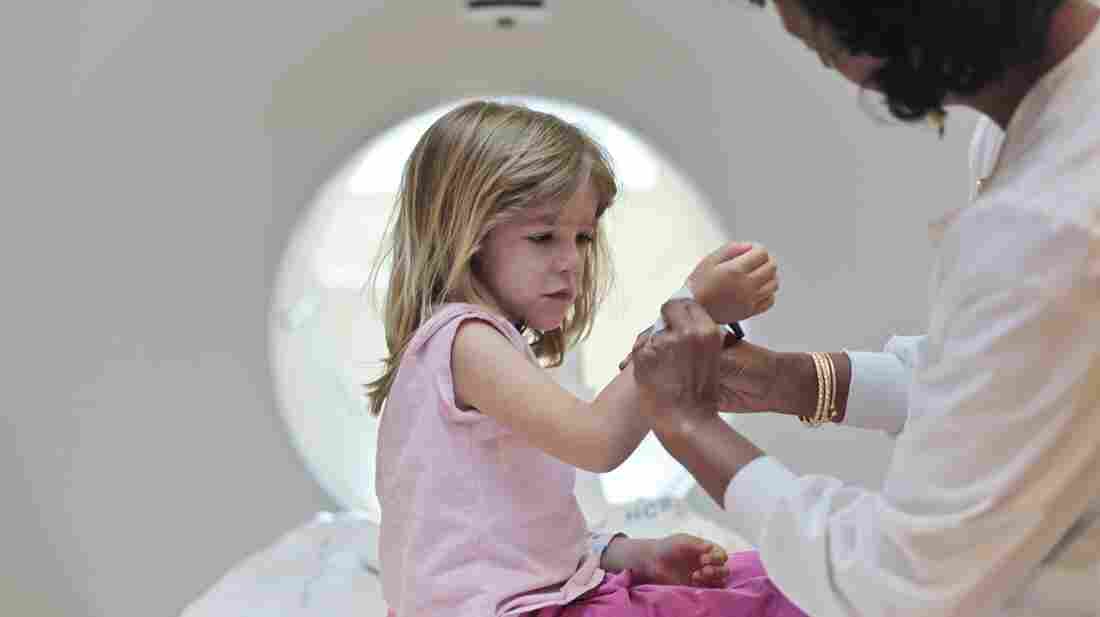 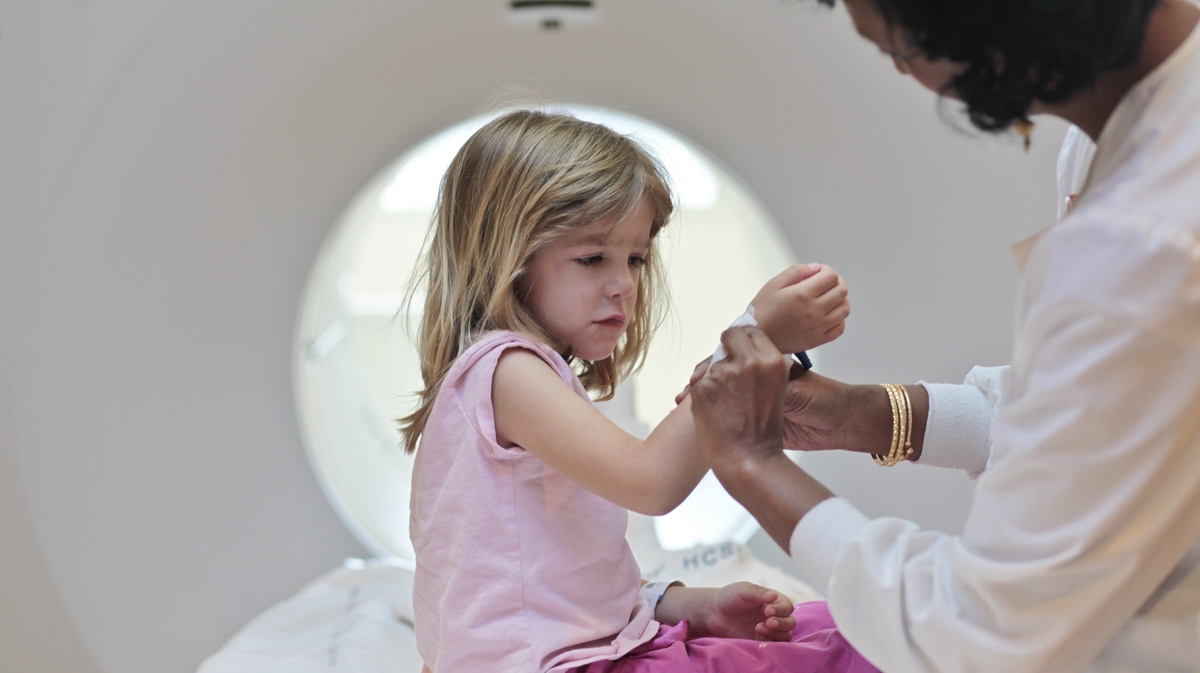 Isabel Doran, 4, gets a CT scan at Children's National Medical Center with her mom, Veronica Doran. The X-ray radiation in CT scans raises the risks for cancer, including leukemia, a new study shows.

Children who get CT scans are at slightly increased risk for brain cancer and leukemia, according to a large international study released Tuesday.

CT scans create detailed images of the inside of the body. So they're great for diagnosing all sorts of medical problems — so great that their use has soared in recent years. More than 80 million are being done every year in the United States.

But the scans use a lot more radiation than standard X-rays, and evidence has been mounting that they may increase the risk for cancer. But no one could say for sure.

"This is the first study that's looked at patients that had CT scans and then looked at their subsequent cancer risk," said Amy Berrington de Gonzalez of the National Cancer Institute, who helped conduct the new study.

The study involved nearly 180,000 British patients who got CT scans between 1985 and 2002 before their 22nd birthdays. The researchers looked at kids because they are more sensitive to radiation than adults.

"We found that the radiation exposure from the CT scans was associated with a subsequent increased risk of both leukemia and brain tumors," she said.

Based on the findings, researchers calculated that the amount of radiation from two or three scans of the head before age 15 would increase the risk of brain cancer threefold. It would take five to 10 head scans to triple the risk of leukemia.

Now, the researchers stress that the overall risk for brain cancer and leukemia is very low, so the risk remains quite low even among those who get scans.

"During the follow-up period of our study, which was about 10 years, we estimated about one excess brain tumor and one leukemia per 10,000 head CT scans performed in young children," Berrington de Gonzalez said.

But scans of other parts of the body also look risky, and it's probably not just a matter of multiple CTs and leukemia and brain tumors among kids, she said. There's a good chance even one CT scan poses some risk to children — as well as adults — and possibly for all sorts of cancers.

"I think it's really a landmark paper," said Andrew Einstein of Columbia University Medical Center, who wrote an analysis of the study that's being published along with the paper in the journal The Lancet.

"It's the first paper that's convincingly established that radiation exposure at low doses — in this case from CT scans — is associated with an increased cancer risk to patients," he said.

Previous research has been based primarily on victims of the atomic bombings of Hiroshima and Nagasaki.

Now, Berrington de Gonzalez, Einstein and other experts stress that it's important to remember that CT scans save a lot of lives.

"There are clearly situations in which CT is indicated: major motor vehicle accidents where there's multiple potential organ injuries. In abdominal pain where surgery might be required for, say, a bowel obstruction or in some patients with apendicitis," said Donald Frush of Duke University, speaking on behalf of the American College of Radiology.

If we just focused on the negatives, there are lots of things in life we wouldn't do. "Just hearing the downsides of driving a car, or crossing a street or flying in an airplane," he said, "if you only discussed the risks of all of those things no one would drive a car or walk across the street or fly in an airplane."

Other experts agree. But many argue that a lot of CT scans — maybe as many as half — are unnecessary. So doctors have to be much more selective about how they use them, they say.

"It's absolutely fair if your physician suggests that you or your child has a CT scan to ask that physician, 'Why?' Ask, 'Are there good medical reasons why the CT scan is justified?' " said David Brenner, another Columbia University Medical Center researcher who has long studied the safety of CT scans.

Meanwhile, work is also under way to reduce the dose of radiation from each scan.