Accessibility links
Traces Of Virus In Man Cured Of HIV Trigger Scientific Debate : Shots - Health News Researchers have found traces of HIV virus in the cells of the first man who was cured of the infection with bone marrow transplants. It raises fresh questions about how to define a cure for HIV/AIDS. 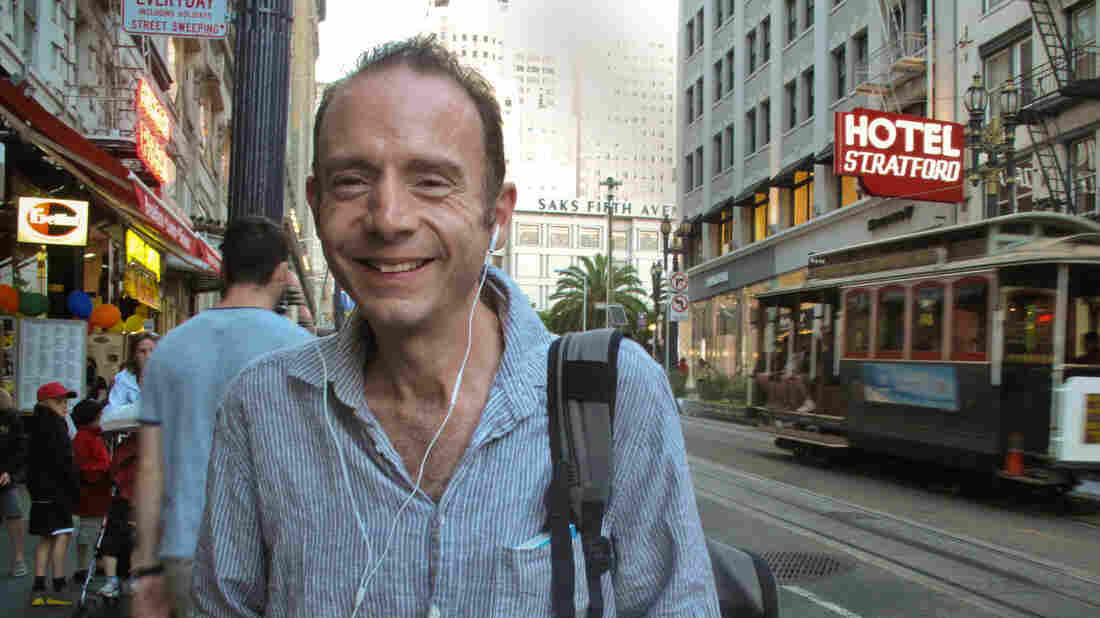 Timothy Ray Brown, widely known in research circles as the Berlin patient, was cured of his HIV infection by bone marrow transplants. Now scientists are trying to make sense of the traces of HIV they've found in some cells of his body. Richard Knox/NPR hide caption

Top AIDS scientists are scratching their heads about new data from the most famous HIV patient in the world — at least to people in the AIDS community.

Timothy Ray Brown, known as the Berlin patient, is thought to be the first patient ever to be cured of HIV infection.

Brown, 45, had two bone marrow transplants in Berlin in 2007 and 2008 to treat leukemia that is apparently unrelated to his HIV infection. The blood cells for the transplants came from a donor with a genetic mutation that makes his cells immune to HIV — they lack receptors the virus needs to gain entry to cells. Details about his case were published in the New England Journal of Medicine.

The transplants appear to have snuffed out Brown's HIV infection. After an initial spike, the stubborn virus disappeared from his system — even though he is no longer taking anti-HIV drugs.

But new data presented last week in Spain raise a question about whether there are minute traces of HIV in some tissues — not whole virus capable of replicating, but pieces of viral genes.

Researchers have combed through 9 billion of Brown's cells, retrieved from his blood, lymph nodes, spinal fluid and intestinal tract. Four different labs could find no trace of HIV in his blood cells. But three groups, using tests at the very limit of detectability, think they have identified bits of HIV genetic material — two from blood plasma and one from intestinal cells.

It could be a false reading, due to laboratory contamination, scientists say. For one thing, the fragments of viral genes don't completely match those of the HIV Brown harbored before his transplants.

"Although the subject has had intermittent evidence for HIV persistence in some assays in some laboratories," the researchers wrote in a summary, "the extremely low levels of virus which were detected, while pushing the limits of sensitivity and specificity ... make it impossible to conclude that the subject remains HIV-infected."

Dr. Douglas Richman of the University of California, San Diego, who found no hint of HIV in Brown's cells, thinks the signals are due to laboratory contaminants. If you do enough runs of these ultra-sensitive tests, Richman told Science magazine's ScienceInsider blog, "you can get a signal in water for pink elephants."

Scientists at the University of California, San Francisco, who are following Brown most closely, declined to comment publicly, citing his confidentiality as a patient and research subject.

But AIDS researchers — and Brown himself, in an interview with Shots — stress that even if the new findings constitute real evidence of HIV in his system, they don't mean he's not cured. Although, it's clear the findings do raise questions about what sort of cure he has.

Scientists hoped Brown had a so-called sterilizing cure — that is, the HIV has been completely eradicated from every cell in his body.

But long and bitter experience with HIV has shown that the virus can hide out in the genes of very long-lived resting immune cells. As these latently infected cells get activated over the years, HIV might reappear in the form of the whole virus or perhaps pieces of its genes.

But if that is happening in Brown, there is no evidence that the virus is actively replicating. To do that, it would need to infect other cells and hijack their genetic machinery to crank out more virus. Since Brown's replacement immune system (from the bone marrow donor) doesn't have the entry portal HIV needs, these new viruses (if they exist in his case) can't spark a new viral conflagration.

Therefore, he may be functionally cured, even if he's not totally free of HIV.

That's what Brown himself thinks may be going on, from his discussions with researchers who have been poking and prodding him for the past five years.

"With a sterilizing cure, they have to be sure that a patient is completely clear of HIV — that they've looked everywhere and can't find any," Brown says. "In my case, I still have the dead virus and it's still showing up in some ways, and so I've got a functional cure."

To him, that's just as good.

But Brown is distressed at the suggestion by some bloggers — in particular a French AIDS researcher named Alain Lafeuillade of the General Hospital in Toulon — that he's not truly cured.

"It's not the case, but people are spreading it," Brown says. "That concerns me because I've been told by many people that I give them hope — people who have HIV. And that's what I want to do. I want to be able to continue spreading my message and be able to do that without having conflicts of people who are misinterpreting the truth."

Brown is particularly upset at suggestions that he has become reinfected with HIV through unsafe sex. "That is not the case," he says. "It's very difficult for me to listen to those things and read those things."

The latest findings are sure to be debated among AIDS researchers and advocates. Their main significance is to show how tricky it will be to determine exactly what constitutes a cure, as researchers devise various tricks to cure AIDS with less drastic means than bone marrow transplants. The question is, when can they be reasonably sure a cure has occurred?

For his part, Brown says he'll continue to be a guinea pig for as long as it takes if he can help resolve that big question.

"Hopefully one day I won't have to do it anymore," he says, because he'll just be one of many cured patients. "That would be nice."