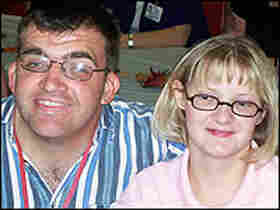 At Misty Cargill's funeral, the minister called her an advocate for other people with intellectual disabilities. She was — although a reluctant one.

Cargill became an advocate when NPR did a story about her fight to get a life-saving kidney transplant. Misty, 30, died in her sleep on Saturday. She was on a list to get that transplant when she died.

In 2006, at the time of the NPR story, the transplant center closest to her, Oklahoma University Medical Center in Oklahoma City, turned her down, saying a woman with a mild intellectual disability did not have the mental competency to make an informed decision to choose a transplant.

"Lurking below the surface is the more likely reason for denial: Someone determines that people with intellectual disabilities are inferior, human beings of lesser value, the last priority," wrote Tim Shriver, chairman of the Special Olympics, in an op-ed in the Washington Post on Christmas Day. "They're put last in line because they're thought not to matter quite as much as other people. For Misty Cargill, like another vulnerable person who is being celebrated today all over the world, there is no bed available. And for Cargill, being turned away may well cost her life."

Shriver was one of many listeners who heard the NPR story and was outraged. Officials at a hospital in Galveston, Texas, offered to put her on their transplant list.

Shortly after the story ran, Cargill's kidney function improved and she was no longer in need of a transplant. But in recent years, her health declined and in the last year she was placed on a waiting list by another Oklahoma City hospital.

My story about Cargill noted that about 60 percent of transplant centers reported they'd have serious reservations about giving a kidney to someone with a mild to moderate intellectual disability. Kidneys are in short supply and doctors must determine who is most likely to thrive with one. Often medical professionals figure that someone with an intellectual disability will not be capable of doing things like faithfully taking all the medications required for a lifetime after receiving a transplant.

But in the 2006 story, I quoted Steven Reiss, a professor of psychology at Ohio State University, who'd studied the issue and found some surprising results. When people with intellectual disabilities get transplants, they have results just as good, or better, than anyone else. One reason is that people like Misty often live in group homes where there's staff to drive them to their doctor's appointments and make sure they take all their medications.

Cargill led a full life, which was clear from the crowd friends said filled the Chisholm Trail Church of Christ in Duncan, Okla. on Tuesday. Along with her family and boyfriend, there were friends from the factory where she packed meters for the oil fields, friends from church and from her bowling league — including the owner of the bowling alley. Friends from the group homes and apartments where she'd lived were also there, according to Robin Arter, executive director of Duncan Group Homes.

They talked about how Misty, despite her declining health, enjoyed being around family and friends, how she loved babies, and doted on her young nephews and nieces. "She always had a hug for everybody and a compliment," says Arter. "She was a sweet, sweet lady."