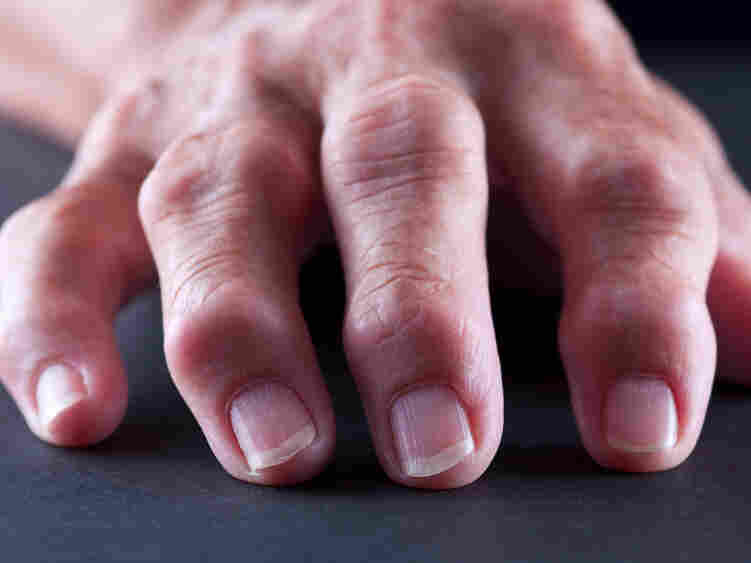 Rheumatoid arthritis is an autoimmune disease that can cause painful inflammation in the fingers and other joints. Richard Rudisill/iStockphoto.com hide caption 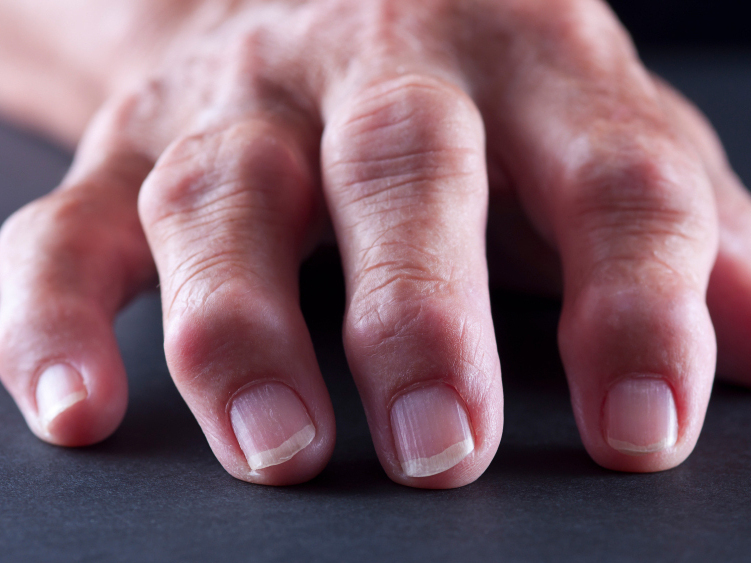 Rheumatoid arthritis is an autoimmune disease that can cause painful inflammation in the fingers and other joints.

Rheumatoid arthritis is a disease that causes painful joint inflammation and can be debilitating for many people who suffer from it. New research shows that the female hormone estrogen, along with proteins produced by the body's fat cells, may play an important role in the development of the disease.

A recent study by researchers at the Mayo Clinic found that obese individuals were 25 percent more likely to develop rheumatoid arthritis than people of normal weight. And although it may seem intuitive that excess body weight could cause joint pain, says Eric Matteson, a rheumatologist at the Mayo Clinic who led the study, the link between rheumatoid arthritis and obesity is more than just stress on the joints from being heavy.

"The link, we think, has to do with the activity of the fat cells themselves," says Matteson.

Unlike osteoarthritis, a form of arthritis that is caused by wear and tear on the joints, rheumatoid arthritis is an autoimmune disease, says Matteson. It occurs when the body's immune system attacks the lining around joints, and the resulting inflammation leads to the destruction of bone and cartilage. Matteson says it's the fat cells that stoke the fire of inflammation.

"We have recognized in the past several years that fat cells are important mediators of inflammation," Matteson says. "They are immunologically active, and they produce proteins that are inflammatory."

Along with a host of molecules that increase inflammation, fat cells produce the female sex hormone estrogen. What's more, there seems to be a gender bias in inflammatory diseases: A woman's risk of developing one is nearly twice that of a man's, and three out of four people who have rheumatoid of arthritis are women.

But studies on estrogen replacement and oral contraceptives have yielded conflicting results, leading Matteson and others to conclude that estrogen is likely just a small piece of a complicated puzzle.

"There's definitely a hormonal link, although we don't know yet what the exact nature of that link is," says Matteson.

Over the past several decades, obesity rates have risen, and so have the rates of arthritis. Matteson says drugs used to treat rheumatoid arthritis generally don't work very well in obese patients.

But if being obese increases your risk, does losing weight help? Matteson believes it can help a lot: Not only does it help relieve stress on painful and inflamed joints, he says, but losing weight also generally makes the drugs work better.

Gail Bishop, 58, agrees. She has had arthritis since she was 16, and although she is a healthy weight now, she was once 65 pounds heavier. She says losing the weight and watching her diet has had an enormous impact on her arthritis symptoms.

"When I was heavier, that knee gave me quite a bit of trouble," says Bishop. "And now that the weight is off, it's pretty much pain-free. So it makes a dramatic difference."

Bishop says she may not be able to control her arthritis, but she can control what she puts in her mouth — and as a result, how she feels. Another way to reduce risk: Don't smoke. Smoking dramatically increases the chances of developing rheumatoid arthritis.