Accessibility links
Medicaid Expansion Goes Overlooked In Supreme Court Anticipation : Shots - Health News Specifically, the court has been asked whether the part of the Affordable Care Act that would expand Medicaid to an estimated 17 million more people over the next 10 years is an unconstitutional infringement of states' rights. The court's decision on the health care law is expected Thursday. 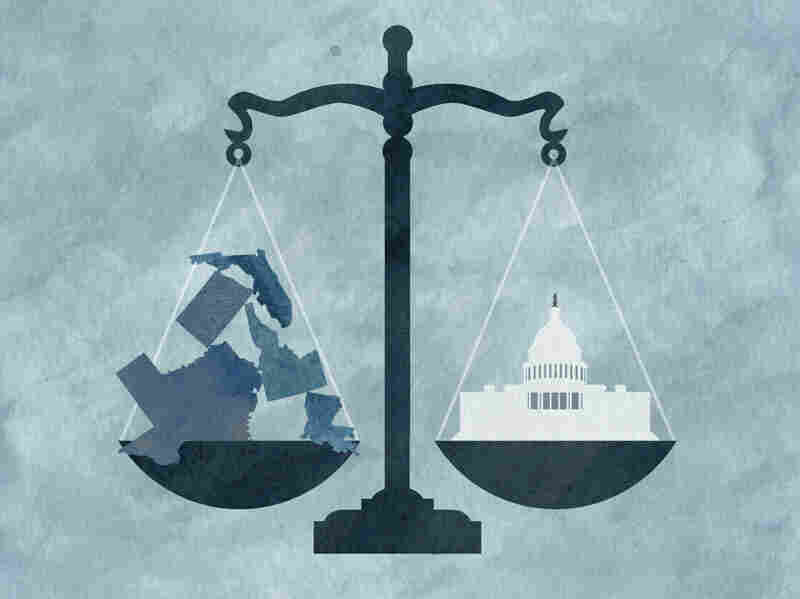 When the U.S. Supreme Court rules Thursday on the constitutionality of the Affordable Care Act, it will also rule on whether the expansion of Medicaid is an unconstitutional infringement of states' rights. Adam Cole/NPR hide caption 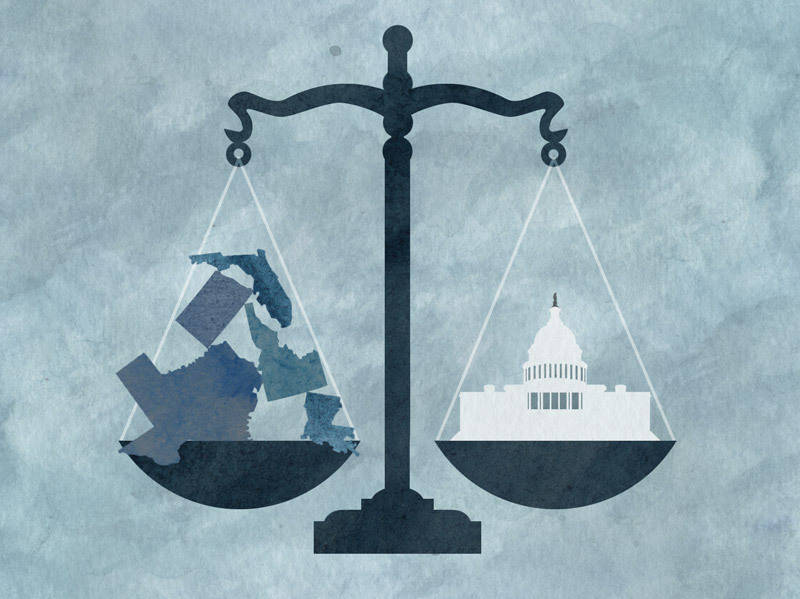 When the U.S. Supreme Court rules Thursday on the constitutionality of the Affordable Care Act, it will also rule on whether the expansion of Medicaid is an unconstitutional infringement of states' rights.

When the Supreme Court announces its long-anticipated decision on the constitutionality of the Affordable Care Act on Thursday, all eyes will be on the so-called individual mandate. That's the section of the law that requires most Americans to either have health insurance or pay a penalty starting in 2014.

But there's another important constitutional question before the court that most pundits haven't talked about much — a broad expansion of Medicaid, the joint federal-state program for people with low incomes.

"Medicaid often doesn't get as much attention as other matters, so it's not shocking," says Alan Weil, executive director of the National Academy for State Health Policy. "But given the stakes for the Medicaid program, I think it warrants a little bit more attention."

Specifically, the court has been asked whether the part of the law that would expand Medicaid to an estimated 17 million more people over the next 10 years is an unconstitutional infringement of states' rights.

The law would expand Medicaid coverage to everyone with incomes under 133 percent of the federal poverty level. In 2012, that's $14,856. In practice, the expansion will mostly cover adults without children or disabilities, since low-income children, parents and those with disabilities are mostly already eligible.

"It's a very favorable formula from a state government perspective," Weil says.

But that hasn't stopped states from complaining. Twenty-six of them, in fact, are parties to the lawsuit now before the Supreme Court.

They say the federal government is basically blackmailing them into expanding Medicaid. That's because while the Medicaid program is theoretically voluntary for the states, it's gotten so large, they say, they no longer have a choice about whether to participate.

"The argument is that the federal government overreached by essentially coercing states into a big expansion of the social safety net," says Douglas Holtz-Eakin, an economist and former director of the Congressional Budget Office who now heads the American Action Forum, a conservative think tank. His group wrote a brief in support of the states.

"With these Medicaid expansions," Holtz-Eakin says, "states don't have a real choice. If they were to give up their federal funds, they would have to come up with another 22 percent of the average state's budget to cover the existing Medicaid programs. It would be a 34 percent tax increase for the typical state. Those are enormous numbers."

On the other hand, Holtz-Eakin concedes, there's a long history of the federal government getting to say how money it provides from federal taxpayers should be spent.

The argument is that the federal government overreached by essentially coercing states into a big expansion of the social safety net.

"When we went to a nationwide 55 mph speed limit, the way it was done was to say, 'Do this or you don't get your highway funds,'" he says. "So it's very common for the federal government to use the funding mechanism as a way to get the states to do what they want."

And if the court did accept the states' arguments about Medicaid, says Weil, it could affect a lot more than just Medicaid.

"Once you go down the path of saying the federal government is limited in its ability to use its spending power to encourage states to take a particular action, you call into question the structure of dozens and dozens of federal programs where the federal government expects the states to put up a share of the funds," says Weil, "whether it's in transportation or social services or health care or environmental protection.

"Anywhere where the federal government says we want to share in the costs, if the court accepts this argument of coercion, pretty much everything with that structure would have to be re-examined."

Most legal scholars, however, consider it unlikely that the court will buy the states' arguments. Holtz-Eakin says his group polled 400 lawyers who either worked as clerks for Supreme Court justices or have argued cases before the court. Before the oral arguments in the case, only 19 percent of them thought it was likely the Medicaid expansion would be found unconstitutional. And after the arguments? "It had gone to 22 percent," he said.