Accessibility links
Why Silk May Be Added To Vaccines Someday : Shots - Health News A protein in silk could help stabilize vaccines and medicines. Researchers at Tufts University have found a little bit of the protein can help preserve heat-sensitive medicines that usually require refrigeration.

Why Silk May Be Added To Vaccines Someday

Why Silk May Be Added To Vaccines Someday 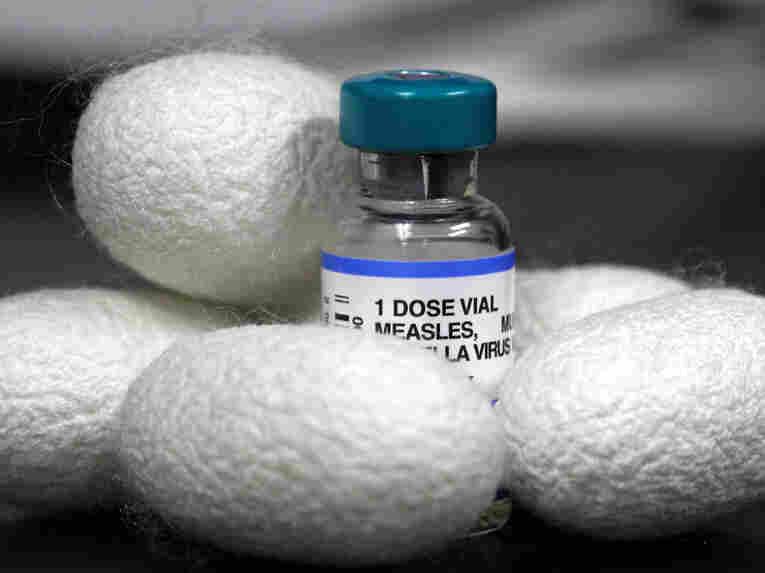 Silk is in neckties, scarves and some fancy underwear and pajamas. Before too long, it might just help keep people from getting sick with measles or polio.

Vaccines play an important role in health, but can be tricky to transport to the far corners of the world. Many vaccines and some other drugs require constant refrigeration — from the factories where they're made to the places where they're ultimately injected into people.

That's where silk comes in.

Researchers from Tufts University recently discovered that proteins in silk could help protect some vaccines and drugs from heat damage, eliminating the need for this so-called cold chain, according to a study published today in the Proceedings of the National Academy of Sciences.

Chemicals in vaccines and some antibiotics given by injection must stay in the right folded shape to work properly. When exposed to heat or moisture those folds can unfold, and the drugs or vaccines can no longer challenge the bacteria or viruses they were designed to battle, says Dr. David Kaplan, a bioengineering professor at Tufts University and lead author on the study.

Silk proteins stabilize the medicines and act to "pin the structure in place," Kaplan says.

With the addition of these silk supports, the vaccine (against measles, mumps and rubella) and two antibiotics were able to retain their potency at temperatures over 100 degrees for two weeks or more. Without silk stabilizers, heat that high saps their effectiveness in less than a day.

Though this finding could help clinics in the U.S. eliminate the need for costly refrigeration facilities, the biggest impact of this discovery could be global.

"The cold chain is a severe limitation to the distribution of therapeutics. Not only in the U.S., but in developing nations where the cold chain is difficult to maintain, or may not even be present," Kaplan tells Shots.

Silk is already approved by the Food and Drug Administration for some medical uses, but Kaplan's concept is far from becoming a pharmaceutical reality.

However, using silk to reduce the need for a cold chain got Kaplan and his team brainstorming.

"Think of a Band-Aid with small little spikes. When you put it on the skin, it penetrates the skin just through the outside layer so it doesn't hurt," says Kaplan. "You can envision making these Band-Aids with vaccines and other drugs in there during the manufacturing, and distribute them without worrying about temperature exposure. And then when you're ready to use it, you just put it on your skin."