Accessibility links
More Answers To Your Questions About The Health Care Law : Shots - Health News Stumped by what's happening with the administration's health law? You're not alone. We fielded questions and have some answers that might help. 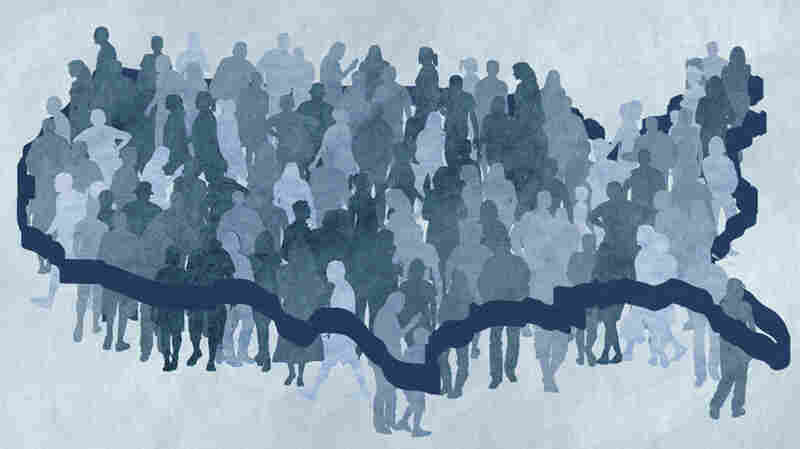 The Affordable Care Act remains pretty much intact after its review by the Supreme Court. So what's in it anyway? Adam Cole/NPR hide caption

Now that the Supreme Court has upheld almost all of the Affordable Care Act, many Americans are scrambling to remember — or learn for the first time – what's in the law and how it works.

We asked for questions from our audiences online and on air. Here's are some, edited for clarity and length, and the answers:

Q: Will the penalty for not having health insurance affect people at all income levels, or will low-income people be spared?

A: The short answer is no, if you can't afford insurance you don't have to buy it.

Here is the slightly longer answer.

You're also exempt if you would have to pay more than 8 percent of your household's income for health insurance, after whatever help you might get from an employer or subsidies from the federal government.

Q: If someone is only insured for six or seven months a year, will there still be a fine?

A: Possibly, but it would be prorated for only the months you didn't have insurance.

There is one exception. There's no penalty in the law for a single gap of less than three months in a year. That's because many employers impose a waiting period. There's also a separate provision in the health law that forbids employers from imposing waiting periods of longer than three months. So no one will have to pay a penalty specifically because a new employer makes them wait to qualify for coverage.

Q: I understand that businesses above a certain size have to provide a health care insurance option, but do they have to pay for it? Does the law require a certain contribution from the employer, or can the employer make the employees just pay, say, 99 percent of the premiums?

A: This is where the law seems a little bit tricky. It doesn't stipulate how much of the premiums employers have to pay, but it does say that overall, employers with more than 50 workers have to provide a plan that covers 60 percent of the covered expenses for a typical population. And that plan can't cost more than 9.5 percent of family income.

Q: How does the law affect Medicare recipients? I heard it cuts billions of dollars from the program. Does it have other effects?

A: Let's take these one at a time. Yes, the law does reduce Medicare spending by roughly $500 billion less than it would have been without the law. That's over 10 years, by the way, and Medicare will cost a little under $500 billion this year. But none of that comes out of benefits guaranteed under the law.

The biggest single chunk comes from reducing what had been overpayments to private HMOs and other health plans that serve about 20 percent of Medicare patients.

The next biggest chunk comes from hospitals and other providers of health care that hope to get that money back because more people will have insurance.

As to other changes to Medicare, there are actually some new benefits. The doughnut hole, that gap in coverage for prescription drugs, is being gradually closed. And Medicare patients are now getting new preventive screenings, like mammograms, without having to pay a deductible.

Q: My son lives overseas, where he is covered by the national health insurance plan. As an American citizen, would he be required to pay the fee for not being covered under an American plan?

A: No, only residents of the U.S. and its territories are subject to the insurance requirements.

Q: I am a veteran getting my medical care from Veterans Affairs. Am I correct that this counts as having insurance, when it comes to the requirement that everyone be covered or pay a penalty?

A: Yes, the VA counts. So does TRICARE and other military health plans. In fact, just about all government health care program, including Medicare and Medicaid, count as well. That's why the Urban Institute estimates that come 2014, only about 7 million people out of the U.S. population of well over 300 million will have to either purchase insurance or be subject to paying the penalty.

Q: If my current insurance policy does not meet the minimum requirements in the Affordable Care Act, and my insurer must raise the standards of my policy, can my insurer raise the premiums I pay?

A: In a word, yes. That was part of the goal of the law, not just to get people without insurance to have it, but to get people with what was considered substandard insurance up to par. This is controversial, and it's the part that leads to claims that the government is interfering in the private insurance market, which in this case it is. But it's in the law because Congress heard about lots and lots and lots of cases where people who had insurance nevertheless ended up bankrupt because the insurance didn't cover what they thought it did. So will this make healthy people who have to spend more unhappy? Yes. But will it protect people better when they do get sick? Yes, it will do that, too. And will the arguments about it continue? Yes, undoubtedly.