Accessibility links
Activists Fear Brazil's Triumph Over HIV Has Fizzled : Shots - Health News When other countries were struggling to deal with the HIV epidemic, Brazil openly acknowledged the problem and launched aggressive campaigns to raise awareness and treat the disease. But activists now say say there are no longer organized HIV prevention efforts. 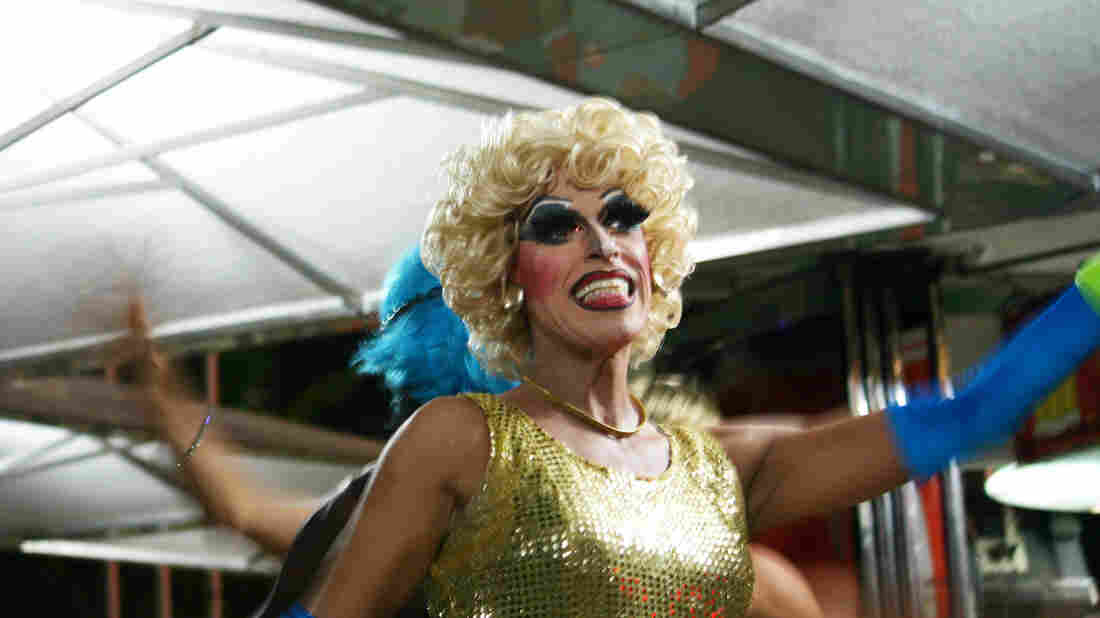 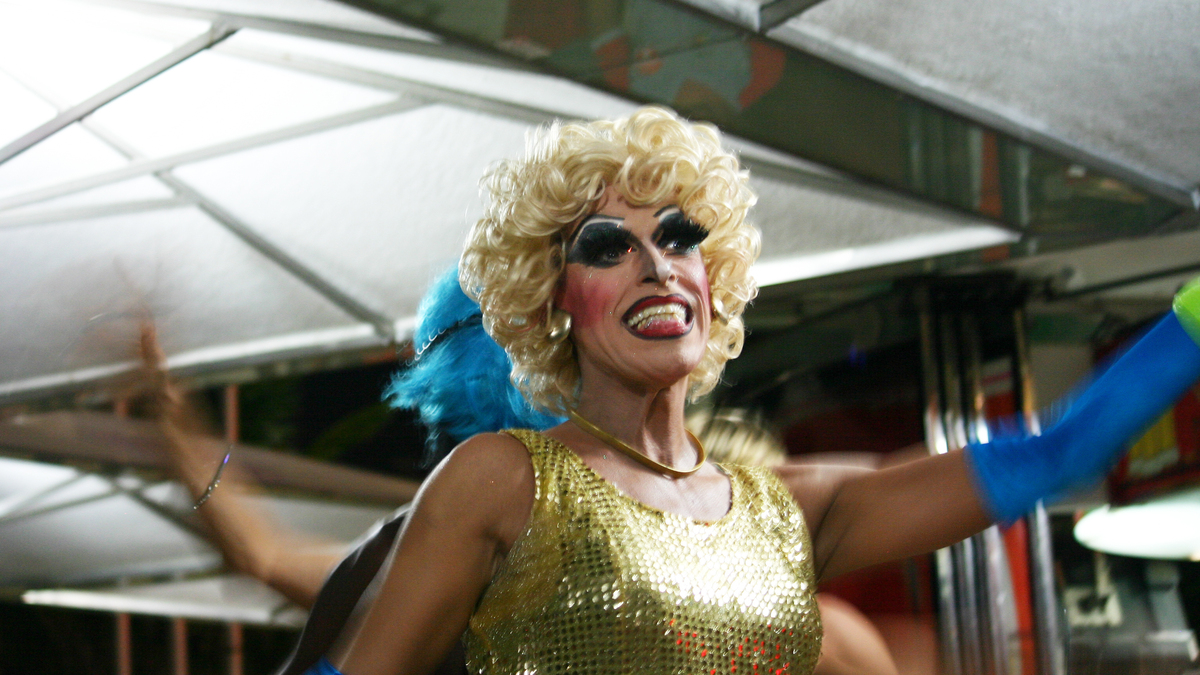 Drag queens at an outdoor restaurant in Copacabana incorporate safe sex messages into a show of lip-synced songs and risque jokes.

Brazil's HIV/AIDS program — which has been praised as a model for developing nations — is now under strain.

When HIV first emerged in the 1980s, Brazil responded quickly to the epidemic. The South American country launched large-scale safe-sex drives and gave away millions of condoms. It offered free treatment to anyone who was infected. The Brazilian government took on international pharmaceutical companies and even broke patents to cut medication costs.

But as the epidemic drags on, HIV continues to spread in Brazil, and AIDS activists say what was once a highly touted response to HIV is now in decline.

"Some years ago, we had a very daring AIDS program," says Veriano Terto with ABIA, the largest advocacy group on HIV/AIDS issues in the country.

Terta says in the 1990s the government, working with local nonprofit groups, gained control of what could have been a national disaster.

Brazil openly acknowledged the problem and launched widespread HIV awareness campaigns. While some countries were accused of being too afraid to talk openly about sex and AIDS, Brazil put out safe-sex media campaigns that bordered on pornographic.

"All the international community used to say that Brazil wouldn't have the conditions to sustain, in the medium and long term ... such a program," Terta says. "And we did it against all the odds."

At the beginning of the 1990s, Brazil and South Africa had similar rates of HIV infection. And some health officials cautioned that Brazil, with its open sexual culture and deep poverty, would see HIV explode. But that didn't happen. Two decades later, 18 percent of adults in South Africa are infected, while in Brazil the HIV rate is less than 1 percent.

But Terta says that energy to continue to confront AIDS has fizzled. "We don't see any more that commitment, that power to really confront the problems."

On a Friday night along Avenida Sotero Reis, bare-breasted women pole dance in front of dingy night clubs. Dark alleyways awash in beer and pounding music snake off of the main avenue. The alleys are packed with bars and food stalls and young women in thong bikinis strut through crowds of young men. 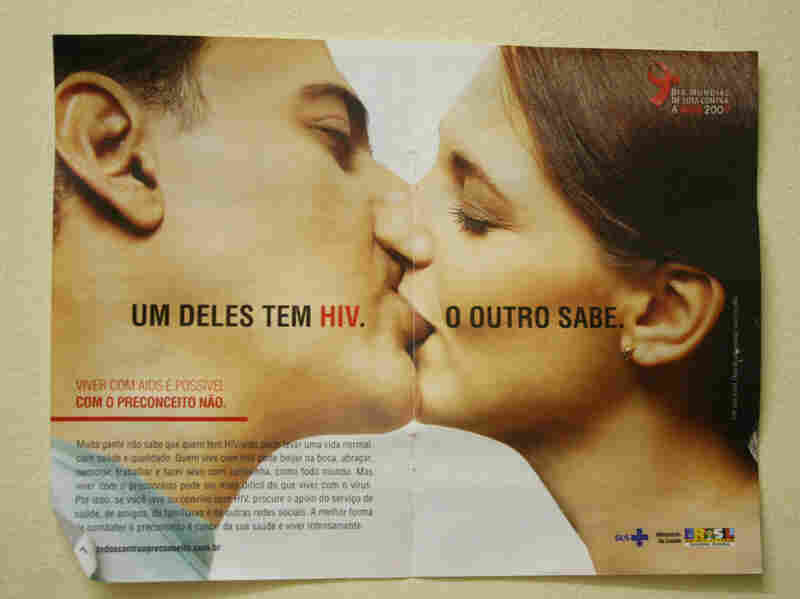 An HIV awareness campaign in a counseling room at the San Francisco de Assisi Hospital in Rio de Janeiro, Brazil. The poster says, "One of them has HIV. The other one knows." Jason Beaubien/NPR hide caption 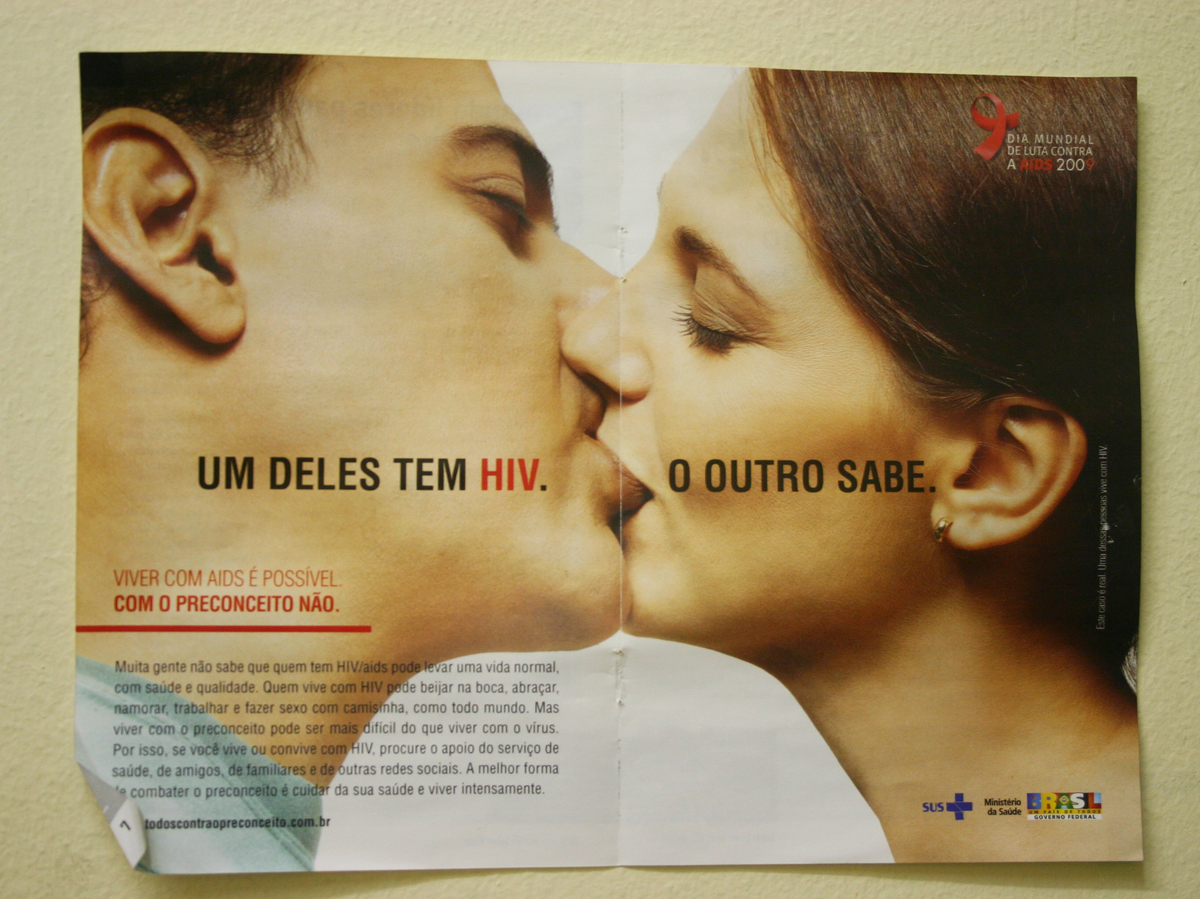 An HIV awareness campaign in a counseling room at the San Francisco de Assisi Hospital in Rio de Janeiro, Brazil. The poster says, "One of them has HIV. The other one knows."

Alineia is a plump 32-year-old grandmother who's been working in Vila Mimosa for nine years. She wears a tight — but by the local standards tasteful — dress.

Alineia says the local neighborhood association, which serves as a prostitutes' union, used to run safe-sex campaigns in Vila Mimosa. They'd hand out condoms and put up fliers about HIV, hepatitis, syphilis and other sexually transmitted diseases.

Alineia used to help with the safe-sex campaigns in the alleyways. But she says the money for them ran out years ago. The constant pressure from clients for unprotected sex, however, continues.

"I had a serious problem with a client recently," she says. "I'd been seeing him for five years. And then he wanted to see me without condoms. And I lost a good client because of this."

While prostitution is not illegal in Brazil, it's also not regulated. Sex workers here can get HIV tests if they feel like it. There are no regular health checkups. According to a survey by the government in 2009, 5 percent of urban prostitutes in Brazil are infected with HIV.

Alineia says most women use condoms most of the time, but she's sure some of them don't. And she says clients often offer extra cash for sex without "the little shirt" — as condoms are called here.

In the early days of the epidemic, international groups played a significant role in trying to stop the spread of HIV in Brazil, including in Vila Mimosa. But much of that foreign assistance has dried up, disappeared or been diverted to Africa.

Direct U.S. funding for anti-AIDS programs in Brazil was suspended for much of the last decade due to a spat over Brazil's refusal to denounce prostitution.

Even among many critics of Brazil's current HIV program, there's still pride in what the country has accomplished.

Brazil has contained HIV and kept it from becoming a generalized epidemic — as happened in much of Africa. And Brazil put together a universal free drug treatment program that's kept people alive.

Josue Mitidieri went on anti-AIDS drugs 18 years ago. "At that time when I was diagnosed," he says, "I went to my first doctor's appointment and the doctor told me, 'Either you take the drugs or you die.'"

Mitidieri says it hasn't been easy being on AIDS medication for the last two decades. Some of the drugs had grave side effects. At times he's had to fight with local health officials to get his prescriptions filled.

Mitidieri criticizes the government in Brasilia, saying that it focuses just on providing drug treatment without addressing the other medical and social needs of people with AIDS. But there's no way he would have been able to afford the drugs on his meager salary as a gardener.

Mitidieri is an example of what Brazil has accomplished. He's 51-years-old now and despite some ongoing medical problems, he's alive and relatively healthy.

"I have a good life," Mitidieri declares. "This is the only life I have. I'm hoping the next one will be better. But for now, life is good."