Accessibility links
San Francisco Thwarts HIV With Wide Testing, Universal Treatment : Shots - Health News A new approach in San Francisco provides HIV testing and treatment for patients with the virus who didn't know they were at risk. "Test and treat" requires long-term vigilance by doctors and patients, but early evidence suggests that it is reducing HIV in the city. 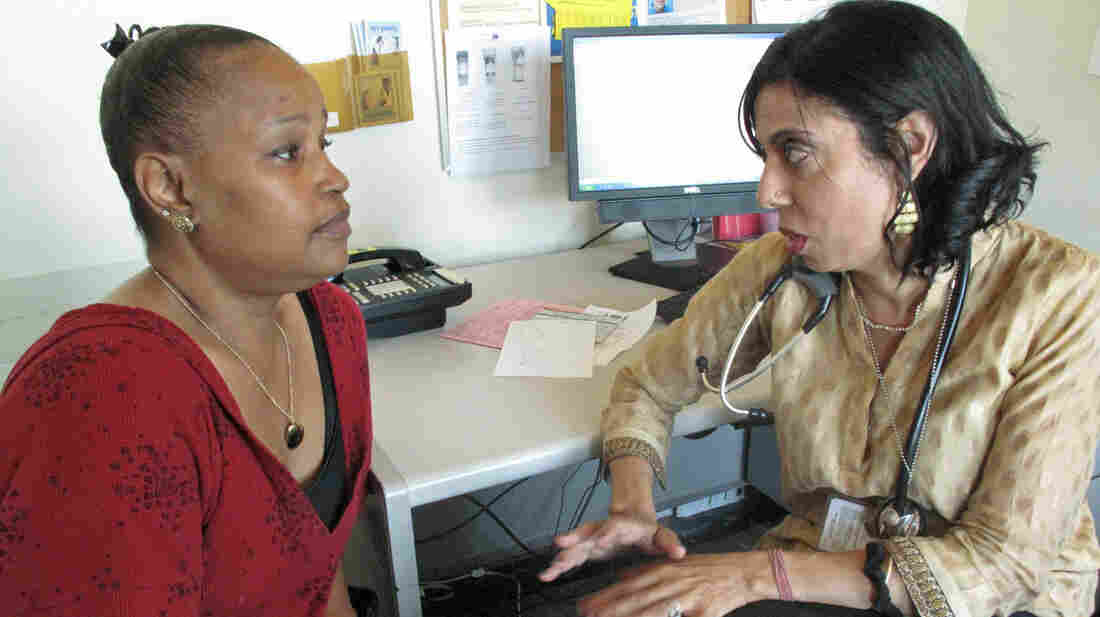 HIV patient Darnell Hollie, 47, talks to her doctor Monica Gandhi (right) at San Francisco General Hospital. Her path from drug addict to model patient was "a lot of work, but if you want it, it's there for you," Hollie says. Richard Knox/NPR hide caption 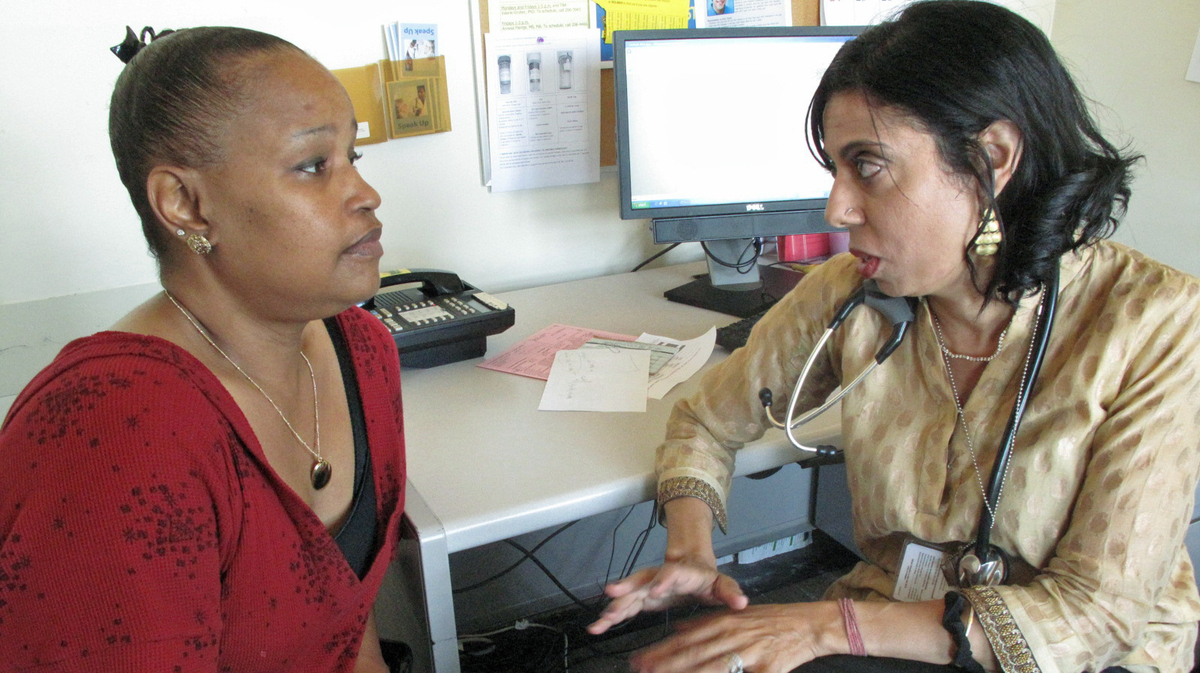 HIV patient Darnell Hollie, 47, talks to her doctor Monica Gandhi (right) at San Francisco General Hospital. Her path from drug addict to model patient was "a lot of work, but if you want it, it's there for you," Hollie says.

If you show up at the emergency department at San Francisco General Hospital — for any reason — there's a good chance they'll offer you an HIV test.

It's part of a big push, in a city closely associated with the AIDS pandemic, to find nearly all people infected with the virus and get them in treatment right away.

Nurse Diane Jones at San Francisco General says 4 percent of patients tested in the emergency room are positive for HIV. And many of these newfound infections are not among gay men, who still make up 90 percent of San Francisco's HIV epidemic.

"The profile of the people who tested positive was significantly different," Jones says of the emergency room testing program. She heads a team that tries to get these patients into HIV care as fast as possible. "There were more women, more people of color, more heterosexuals, more transgender."

Health officials say 94 percent of gay and bisexual men in San Francisco who have HIV know they're infected. If they aren't, they know if they're at risk. But that's not the case among others.

About half of people who test positive "never perceived themselves at risk," Jones says. Not surprisingly, many are shocked to come to the emergency room for a fever or broken bone and end up with a diagnosis of HIV.

Women in particular "often do not know they're at risk," says Monica Gandhi, a doctor at the hospital who specializes in treating women with HIV. "Men kind of know, often. But women, if the risk is their sexual partner, may not know. So there is a lot more surprise, I think."

Patients are devastated, of course. But Jones' team, called Positive Health Access to Services and Treatment, swoops in and tries to get them past their shock.

"It can go both ways," Gandhi says. "Someone's reeling from a diagnosis and then they're also reeling from the fact that they suddenly have to be on chronic, lifelong therapy when they've never been on medications. That can be shocking.

"Or it can go the other way," she says. "That you were just hit with this terrible scary diagnosis, but ... you're told right away: We have ways to control it. You can get on medication; you're going to be fine; your life span's going to be normal; you're going to do great."

This approach of aggressive testing and early treatment is called "test and treat." One of its justifications is that the earlier someone gets treated after HIV infection, the healthier he will be in the long run. That's the message of many reports being presented this week at the International AIDS Conference in Washington, D.C.

The other argument for test and treat is that patients whose HIV is suppressed by medication — to levels undetectable in the blood — are far less likely to pass the virus on to others.

And there's another benefit: Gandhi says sometimes getting HIV-positive people plugged into regular care helps them make big changes in other parts of their lives.

Gandhi introduced me to a 47-year-old African-American woman named Darnell Hollie, who had a rocky life long before she got HIV.

"I'd been a crack user for years and years up until I was 25," Hollie says. Then she started injecting heroin, and got HIV from a fellow user who Hollie didn't know was infected.

But five years later, when she was 32, Hollie realized that her assumption about dying young had been premature. "I was like, OK, let's try something different," she says. "So I got clean, I went into treatment, I met my husband. And hey, here I am, 15 years later."

She acknowledges it wasn't quite that simple. It took a lot of support over the years from Gandhi and her co-workers at San Francisco General, from other women with HIV, and from her family. And it took daily discipline.

"It's a lot of work," she says. "But if you want it, it's there for you. ... The first thing I would say to a person who's just now finding out she's positive is to let her know that it's not a death sentence."

Gandhi says Hollie is a model HIV patient who takes her antiviral medications without fail — and that's vital if test and treat is going to work. But unfortunately, not all of her patients are doing so well.

Tammy St. Germaine, also 47, ran away from home when she was 13 and quickly got into the drug scene.

She's been off heroin for 10 months, but she's still addicted. "I smoke a lot of crack," she says.

St. Germaine got diagnosed with HIV four years ago. Eventually she got into Gandhi's care and on antiviral treatment. That was under a policy that might be called "test and wait" — doctors would monitor the blood counts of HIV-infected patients and hold off antiviral treatment until there was evidence that their immune systems were severely damaged.

But even though the medicine didn't cause side effects in St. Germaine's case, she wasn't good about staying on treatment. She admits she was "mostly off" her regimen.

And that's caused a big new problem. When somebody doesn't take HIV drugs every day, the virus mutates — it becomes resistant to those particular drugs.

"We just got the news yesterday that she'd become resistant because of off-and-on use of this medication," Gandhi says.

"I didn't realize how valuable it was until it was already lost," St. Germaine laments. "I might have worked harder to keep it, you know?"

Gandhi has decided to try another drug regimen. In the past she might have waited until St. Germaine had gone through detox and gotten clean of illicit drugs. Otherwise she might start skipping antiviral doses again — and blow another regimen.

"That's a risk that we're taking," Gandhi says. "But we don't want to go the other way in terms of risking her not being on the meds. So it's an incredible balance, and it's incredibly difficult and complicated."

One difficulty is that the new drugs can cause more side effects than the last ones she was on. So St. Germaine will have to be monitored closely. The last thing Gandhi wants is for her to lose this set of drugs, because soon she might run out of options.

As Hollie says, it's a lot of work. But in the big picture, all this effort may be paying off.

Dr. Moupali Das of the San Francisco Department of Public Health says the amount of HIV circulating in the city has been reduced overall in the past six to seven years.

And here's the payoff: "That decline in the amount of virus in the city was associated with a reduction in newly diagnosed HIV cases," Das says, "by almost half."