Accessibility links
How To Make Condoms For Women Fashionable : Shots - Health News How do you get women to rethink condoms made for them? Advocates are trying a fashion show and the world's longest chain of paper dolls at the international AIDS meeting in Washington. Female condoms are the only contraceptive initiated by woman that protects against HIV infection.

Two of the more colorful events at the 19th International AIDS Conference so far are focused on a single message: The world needs more female condoms.

The first event was an intimate fashion show Monday night, featuring dresses made with female condoms. Highlights of the show included a beautiful baby-doll dress layered with white condoms and a yellow miniskirt covered with condoms twisted into roses.

The second event features what could soon be the world's longest chain of paper dolls. People at the meeting are encouraged to write about the importance of female condoms on the dolls, then add them to a chain hanging from the ceiling of the convention hall.

The organizers have collected more than 25,000 dolls from around the world this year. By Friday, they expect to break the Guinness World Record with a chain nearly 6 kilometers long. 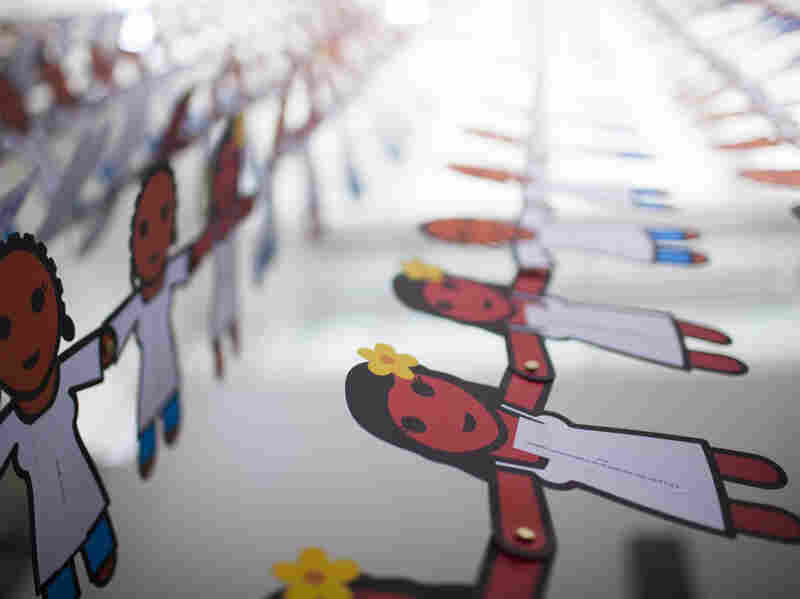 A paper doll chain with more than 25,000 cutouts hangs from the ceiling of the Washington, D.C. convention hall. Each doll displays a message about the power of female condoms to stop HIV. Benjamin Morris/NPR hide caption

Both the fashion show and paper doll campaign are organized by a Dutch group, called the Universal Access to Female Condoms (UAFC) Joint Programme. The goal of UAFC is to make female condoms more available, accessible and affordable.

"Female condoms are the only contraception that is both initiated by woman and protective against HIV infection," says Ciska Kuijper, a project manager at UAFC. "Female condoms give women control of their health rights."

In sub-Saharan Africa, 61 percent of people infected with HIV are women. For people under 24, the number rises to 75 percent. The UAFC sells about 2.5 million female condoms each year in Cameron and Nigeria.

Female condoms have been on the market since 1993, but they didn't catch on. An improved, second generation version, some call "Female Condom 2," came out in 2009.

"FC2 is much more popular than FC1," Kuijper tells Shots. "They don't make noise, and they are softer."

Female condoms resemble their male counterpart, except they are larger and have a ring on either end to hold them in place. This extra material makes the condoms more expensive than traditional condoms, but a recent study here in the U.S. suggests that female condoms are cost-effective in preventing HIV infections.

According to the report, a campaign that distributed more 200,000 female condoms in the District of Columbia saved the city $8 million in future medical costs. That turns out to be a savings of approximately $15 for every dollar spent on the condoms.