Accessibility links
Hospital Specialists Help Remind The Sickest Kids They're Still Kids : Shots - Health News Child life specialists can minimize the trauma caused by a hospital stay. They're also costly, but experts says they help doctors be more efficient and can pay dividends far into the future for a sick child. 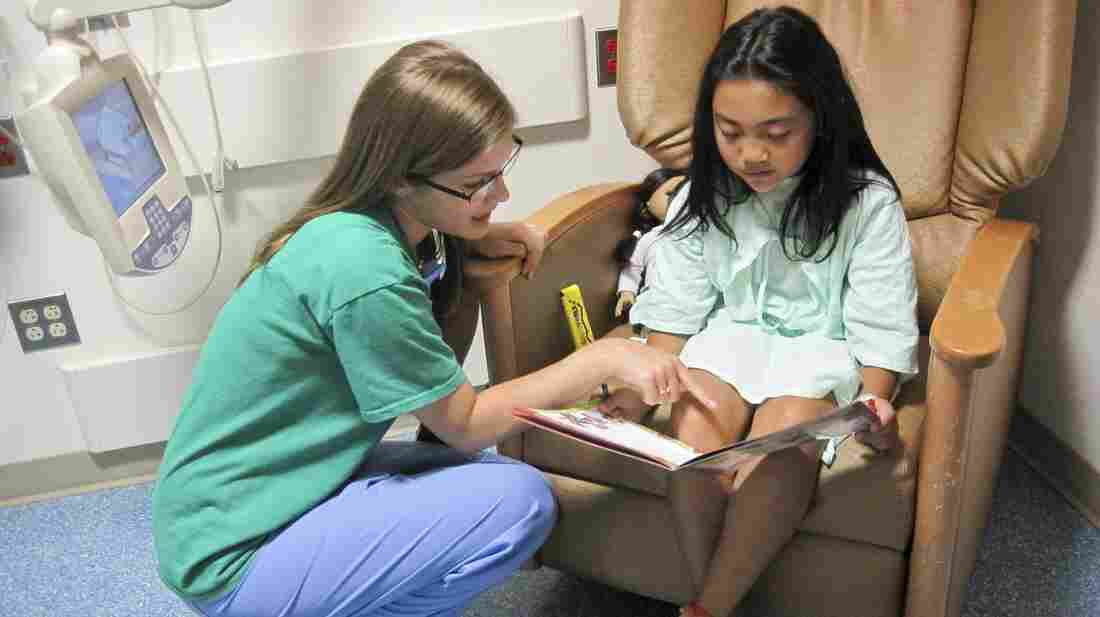 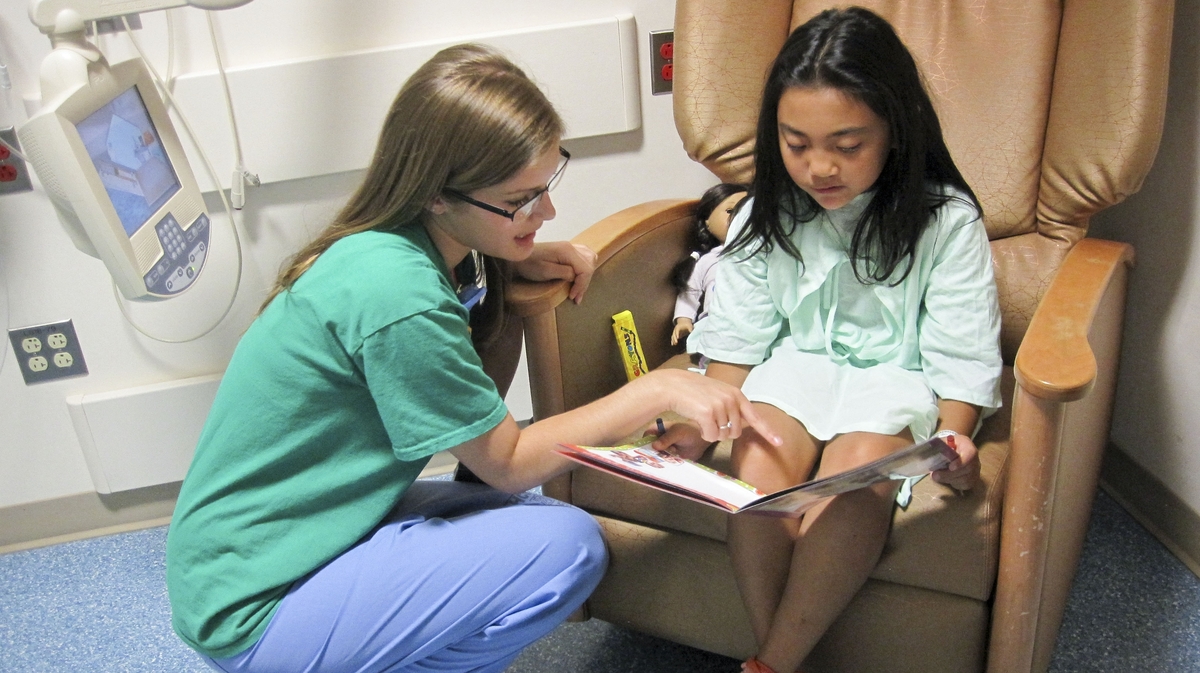 Yoselyn Gaitan, an 8-year-old with a shy smile, sits quietly in an exam room at Children's National Medical Center in Washington, D.C., wearing a tiny hospital gown. She looks a little uneasy as she waits to be brought back to the operating room for the final surgery on her cleft palate.

Kelly Schraf spots her through the curtain and tiptoes into her room.

Schraf is a child life specialist, a type of health care provider whose job is to help sick children and their families navigate difficult medical situations emotionally and psychologically while in the hospital. They do it largely through play — the basis of how a child learns and grows.

Schraf introduces herself to Yoselyn and her mother, and explains to them why she's there: "It's my job at the hospital to make it easier for you to be here and make it more fun." At the word "fun," Yoselyn begins to look a little more relaxed.

Schraf is straight out of college, which she followed with a mandatory 480-hour child life internship. Her favorite part of her job, she says, is "knowing that I can work with the hospital team and make [a child's] stay better."

Pediatric ear, nose and throat surgeon Rahul Shah says the doctors in the outpatient surgery unit are as grateful for child life specialists like Schraf as the patients are.

"It's really profound when you hear some of the most old school physicians or surgeons asking for something you would consider warm and fuzzy," he says. But those doctors insist that they need child life specialists largely because they make the unit more productive.

When the child life specialists aren't available, Shah says, "It's hard. You're pulling [children] sometimes away from the parents. The parents are upset. The child is upset. It heightens their anxiety. You bring them back to the operating room, and it's a lot harder to put them back to sleep and ... give them an IV."

Even if each visit saves only four minutes of the surgical team's time, he says, it can allow that team to accomplish an extra surgery each day.

There are about 4,000 child life specialists in the country. Most of them work in the acute units with the very sickest children. Liz Anderson, who, like Schraf, is 24, works in the oncology unit, where children often spend months at a time.

"I get to know them very, very well," Anderson says.

She's been working with 9-year-old Owen O'Hara for several weeks. He sits in his pajamas in an isolation room, a feeding tube in his nose. It's been less than a week since his bone marrow transplant, which his doctors hope will cure his leukemia; his immune system is still too vulnerable for him to be in the unit's playroom with the other kids. So yesterday, Anderson brought him a brand new set of Legos to play with.

But like all things in health care, child life programs come at a price. The 16 child life specialists at Children's National Medical Center cost about $800,000 a year, which gets passed on to patients and insurers.

Mark Wietecha, president and CEO of the Children's Hospital Association, says the cost is "greatly worth it." Child life specialists can minimize the trauma caused by a hospital stay — and that can pay dividends far into the future for a sick child, he says.

"It's really almost an insignificant amount of money on our national expenditure to let the sickest kids have some opportunity to a life and be re-assimilated," Wietecha says.

O'Hara couldn't agree more. The child life program, she says, is "like having a little bit of a normal life in the middle of something that's not normal."