Accessibility links
Amid An AIDS Epidemic, South Africa Battles Another Foe: Tuberculosis : Shots - Health News Some parts of the province of KwaZulu-Natal in South Africa have HIV rates that are more than twice the national average. And clinics in the region are seeing another major problem: thousands of cases yearly of multi-drug-resistant TB. 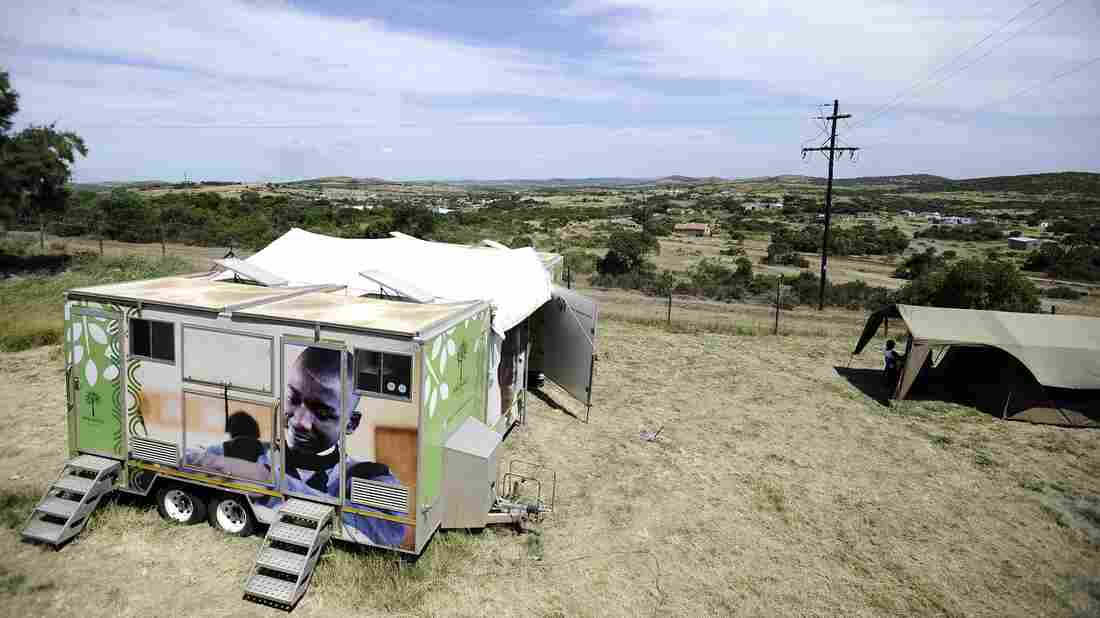 A mobile clinic set up to test students for HIV is parked near Madwaleni High School in Mtubatuba, KwaZulu-Natal, South Africa on March 8, 2011. Parts of the South African province have HIV rates that are more than twice the national average. Stephane de Sakutin/AFP/Getty Images hide caption

Now in addition to HIV and AIDS, the province is also dealing with a major tuberculosis epidemic.

In the northeastern part of KwaZulu-Natal, dusty dirt tracks wind through pastures and fields of sugar cane. The hillsides are dotted with small huts made of cinder blocks and field stones.

Bongiwe Buthelezi, 51, is sitting on a straw mat on the floor of her two-room house, getting tested for HIV.

Buthelezi says she's getting tested because her husband works hundreds of miles away doing construction and she suspects he sleeps with other women.

"She's not staying with the husband; the husband is working at Mzmkula, so she thinks that maybe he has a partner somewhere," a translator says.

Buthelezi has asked her husband to get checked for HIV but she says this suggestion always makes him angry and he refuses to get tested. She lightheartedly adds that his stubbornness is one more sign that he's guilty.

Fifteen minutes after they start the test, Mngomezulu and Buthelezi peer down at the paper test strip.

The test has come back negative.

Drug-Resistant TB On The Rise

The epidemic in KwaZulu-Natal is driven by social, political and economic factors. And the HIV rate in some impoverished parts of the province tops 40 percent.

Dr. Yunus Moosa, the head of infectious diseases at the University of KwaZulu-Natal, says HIV has overwhelmed the local health care facilities at the King Edward VIII Hospital in Durban. 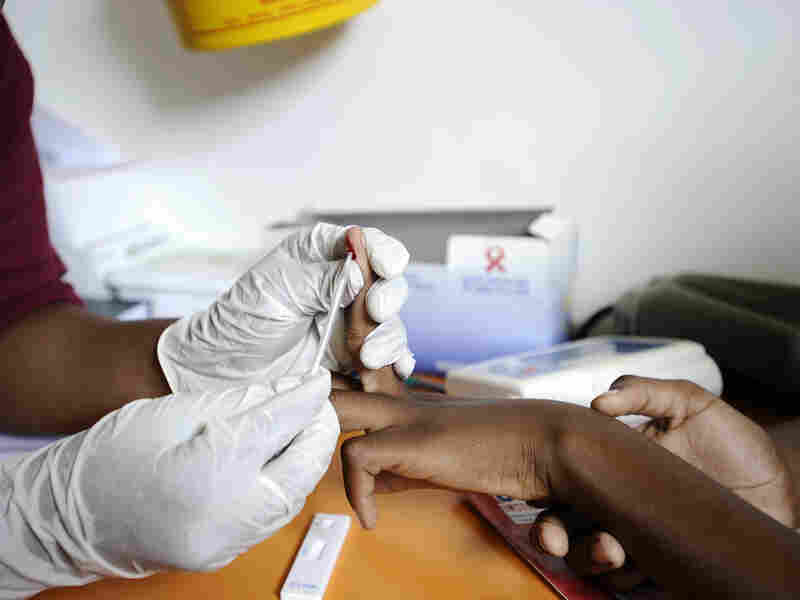 A drop of blood from a finger-prick is all that's needed to test for HIV. A nurse draws a sample from a student in a mobile clinic on March 8, 2011 in KwaZulu-Natal, South Africa. Stephane de Sakutin/AFP/Getty Images hide caption 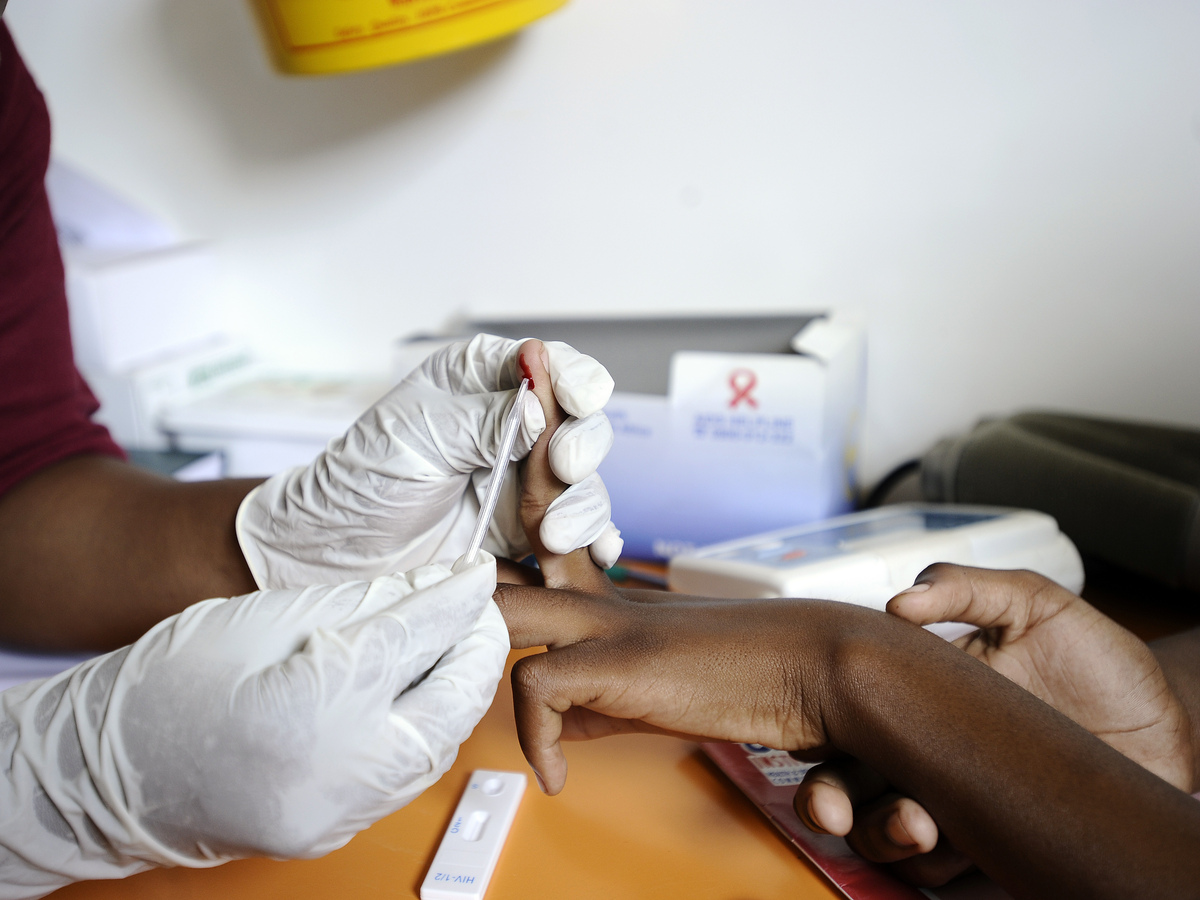 A drop of blood from a finger-prick is all that's needed to test for HIV. A nurse draws a sample from a student in a mobile clinic on March 8, 2011 in KwaZulu-Natal, South Africa.

Last year South Africa broadened the criteria for free HIV drug therapy in an effort to get more people on to treatment earlier in the course of the disease. But Moosa says many patients, even though they know they're HIV positive, avoid the country's overcrowded public clinics until they're extremely sick.

"There's only so much medication can do, and you need a patient to come to you with a reasonable state of health so our medicines can make a difference," Moosa says. "But they come to us in a severe condition and it's so difficult to reverse all of that. So the mortality is very high."

Showing up for appointments is extremely important to for tuberculosis treatment, which takes at least six months and can require numerous trips to a clinic. If patients don't follow their regimens, drug-resistant TB can develop.

KwaZulu-Natal is now seeing thousands of cases of multi-drug-resistant TB each year. Dr. Moosa says the TB epidemic is getting worse because the health clinic staff aren't handling it properly, for instance misdiagnosing drug-resistant TB as regular TB.

"So you will have a patient that has multi-drug-resistant TB again on treatment for standard TB and sent back into the community," Moosa says. "So he's on inappropriate treatment, getting sicker but at the same time disseminating his bacteria to people around him. So the epidemic is gradually growing simply because we cannot deal with the numbers we are seeing."

A Burden On Public Facilities

The clinic in KwaZulu-Natal that sees the most TB patients is the Prince Zulu Communicable Disease Center in Durban, the provincial capital. The clinic sits right next to the city's main public transportation hub, the central taxi stand.

Each month the Prince Zulu Center has about 5,000 patients on TB treatment.

Surie Chinappa, a doctor and an administrator at the center, peers at a chest X-ray on her computer of a patient who just arrived severely wasted from TB. Wispy white clouds extend across the X-ray image of his chest.

"This is the same patient that has TB. That is not normal," she says. "Big cavities in his lung — that's all infection. In a normal X-ray, all this will look black because you have air. But this patient, you can see, he has a big cavity and infiltration in both the lungs actually. So he's quite weak. He's come in for admission. He's going to be admitted in to hospital today."

Chinappa says many patients come to this center in downtown Durban because they don't want to be seen getting treatment for TB or HIV at their local clinics. She says this pushes an increasing burden on public facilities such as hers.

Last year, for instance, the Center's HIV drug treatment clinic had more than 2,000 patients on drug therapy yet only one full time doctor.

One concern among many clinicians in South Africa is that the number of patients needing HIV and TB treatment continues to rise at the same time that international assistance to combat these problems is going down.

The U.S. government, through the President's Emergency Plan for AIDS Relief, or PEPFAR, has been providing about a half a billion dollars a year to help South Africa confront HIV, but that allocation has started to shrink. And U.S. officials have made it clear that over the coming years they plans to get out of the business of funding long term HIV care in South Africa.