Accessibility links
Cost Of Treatment Still A Challenge For HIV Patients In U.S. : Shots - Health News Many people living with HIV in the U.S. struggle to remain eligible for public assistance programs that pay for medication. For some that means avoiding full-time jobs or refusing pay raises so they can get coverage for the expensive drugs. 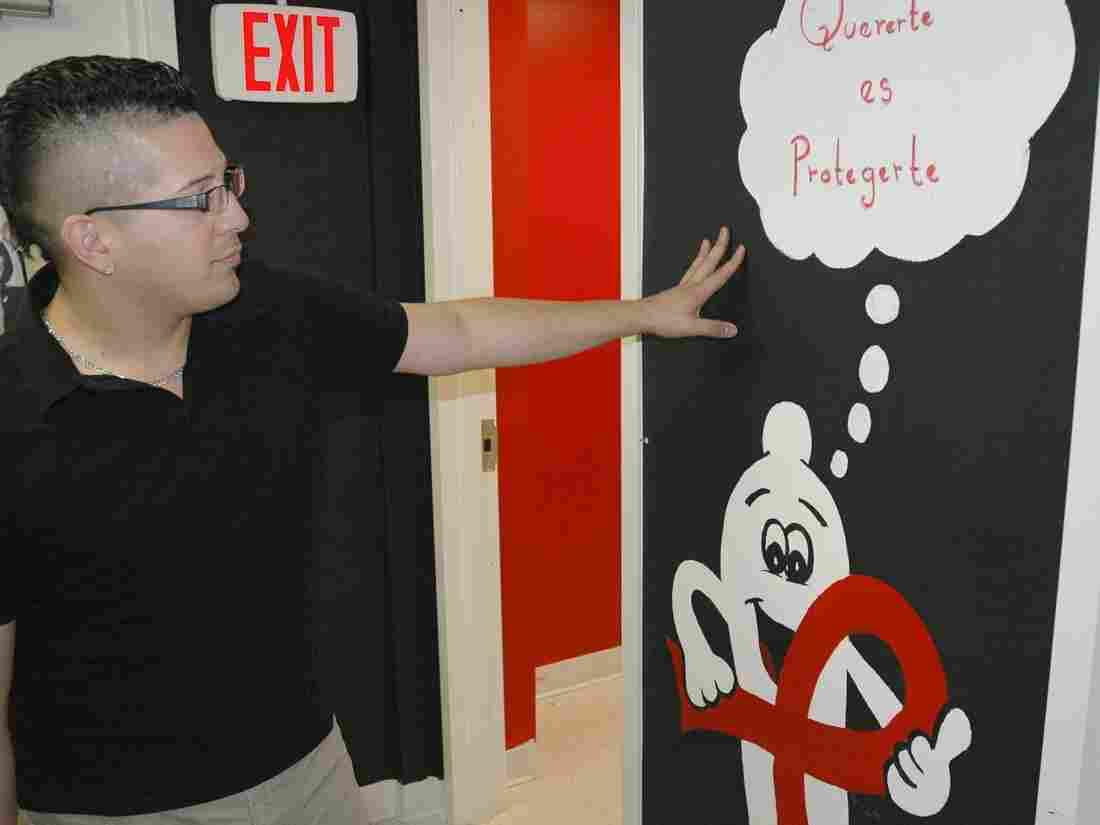 Ruben Bermudez stands in front of a sign that says in Spanish, "To love yourself is to protect yourself." He has struggled to remain eligible for AIDS drug assistance programs since he went on treatment four years ago. Jessica Camille Aguirre/NPR hide caption 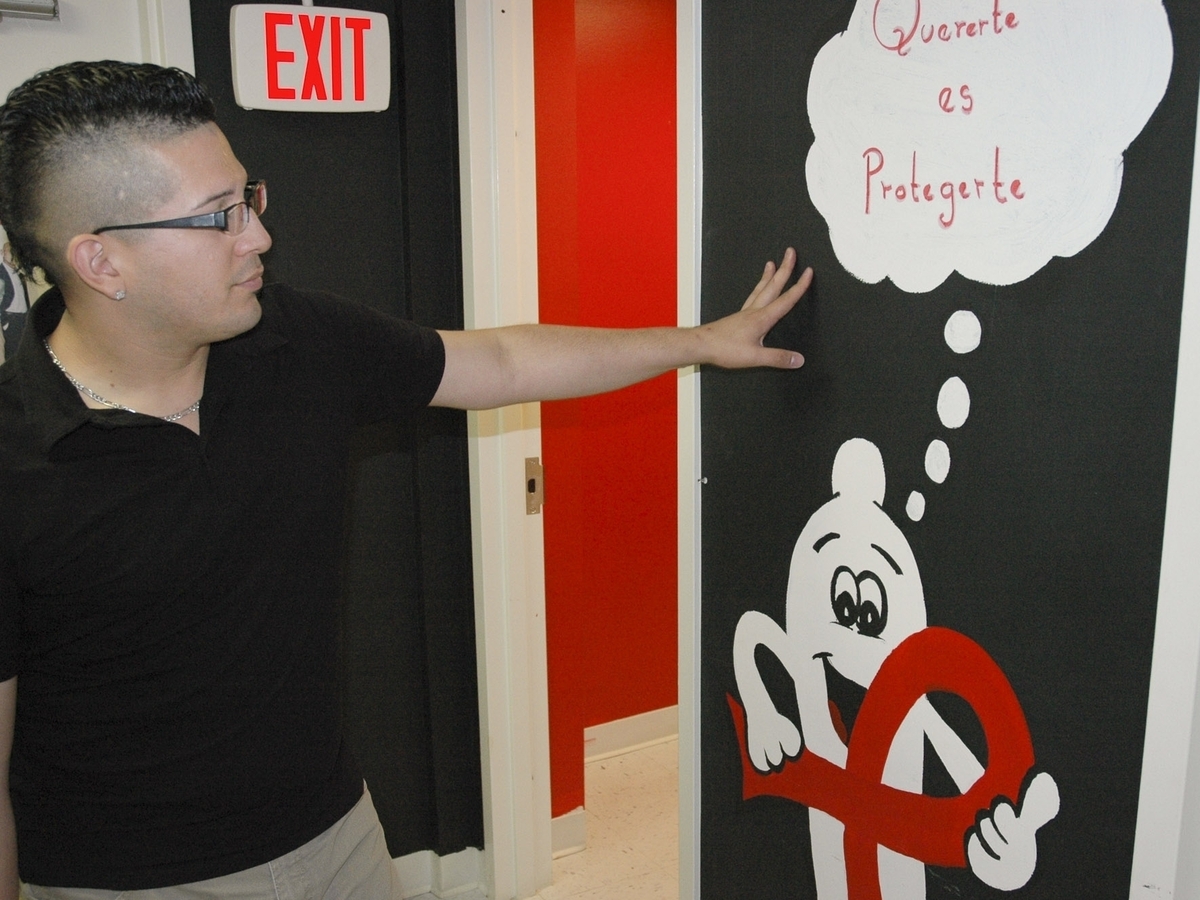 Ruben Bermudez stands in front of a sign that says in Spanish, "To love yourself is to protect yourself." He has struggled to remain eligible for AIDS drug assistance programs since he went on treatment four years ago.

When Ruben Bermudez, 31, found out that he had HIV more than a decade ago, he didn't want to take his medicine. He went on treatment for a few weeks, but said the intensive pill regimen made him feel dizzy.

He stopped treatment and tried to ignore the diagnosis, moving to Florida from Washington in pursuit of sunshine. In 2008, he learned that one of his best friends died of a brain tumor that couldn't be treated because his immune system has been debilitated by AIDS. Bermudez realized that his only chance at a relatively healthy life would depend on taking pills daily.

"With his passing I decided to wake up and take control of my health and my life," Bermudez says. "Because at that point my HIV was spiraling way downhill. I should have been dead."

But the pills for HIV that he's taken daily since then have come with a hefty price tag. Monthly HIV treatment regimens range from $2,000 to $5,000 — much of it for drugs. With the life expectancy for HIV patients increasing, the lifetime cost of treatment in today's terms is estimated at more than half-million dollars. And while many people qualify for public assistance programs, staying eligible for support is a constant balancing act.

"Individuals that are receiving their drugs for free through a program like ADAP or through Medicaid are really concerned about earning more than what would then be eligible for that program."

According to the Centers for Disease Control and Prevention, around half the people diagnosed with HIV in the U.S. don't receive regular health care. Of those who do, 42 percent receive Medicaid and 24 percent are uninsured.

People who are uninsured can still qualify for health services through the federally funded and state-run Ryan White Care act, which pays for medication through the AIDS Drug Assistance Program, or ADAP.

While the Obama administration released $79 million in funding for ADAP last week — eliminating waiting lists in 10 states — the program's support has fluctuated with each annual congressional appropriations process.

Each state has an eligibility process to receive ADAP support, and Murray Penner, with the National Alliance of State and Territorial AIDS Directors, explains that in many places the income cut-off limit for aid is $22,000 annually.

"Individuals that are receiving their drugs for free through a program like ADAP or through Medicaid," he says, "are really concerned about earning more than what would then be eligible for that program."

For Bermudez, making sure he remains eligible for assistance with his HIV care has meant refusing offers of full-time employment and raises.

Still, he's grateful to have the support. "I'm really lucky to have those programs available to me, because without them I probably wouldn't — I would not — take medication," he says. "Because I would not be working just to pay for my medication. I probably couldn't even afford it."

Medicaid's recent expansion under the Affordable Care Act may also make it easier for people living with HIV to pay for care, and many hope that with patents expiring on vital drugs in the coming years, cheaper generics may bring down the price.

Expanding access to care has implications beyond treating the virus in the person – public health experts say it's also critical to stopping the disease from spreading. People taking AIDS drugs are much less likely to transmit the virus to someone else, which ameliorates the long-term burden to public assistance programs.

"When we can avert HIV infections," says David Holtgrave, a professor at the Johns Hopkins Bloomberg School of Public Health. "We're not only saving lives. We're also saving dollars as well."

Bermudez, whose health has stabilized since he started taking medications four years ago, hopes to eventually be able to buy private insurance and pay for his drugs himself.

"Hopefully in the future it would available at a reasonable cost for everyone that is working, so that they won't have to do the things that I had to do — to quit jobs or to lie about income or just cover it up or anything like that," Bermudez says. "Because it has to be a way of life that's comfortable for everybody."