Accessibility links
What Does The Future Hold For Bird Flu Research? : Shots - Health News Scientists gather in New York to consider the future of bird flu research after a moratorium on the work passes. Critics say the work and its findings could pose security risks, but scientists defend their experiments as preparation for outbreaks.

What Does The Future Hold For Bird Flu Research?

What Does The Future Hold For Bird Flu Research? 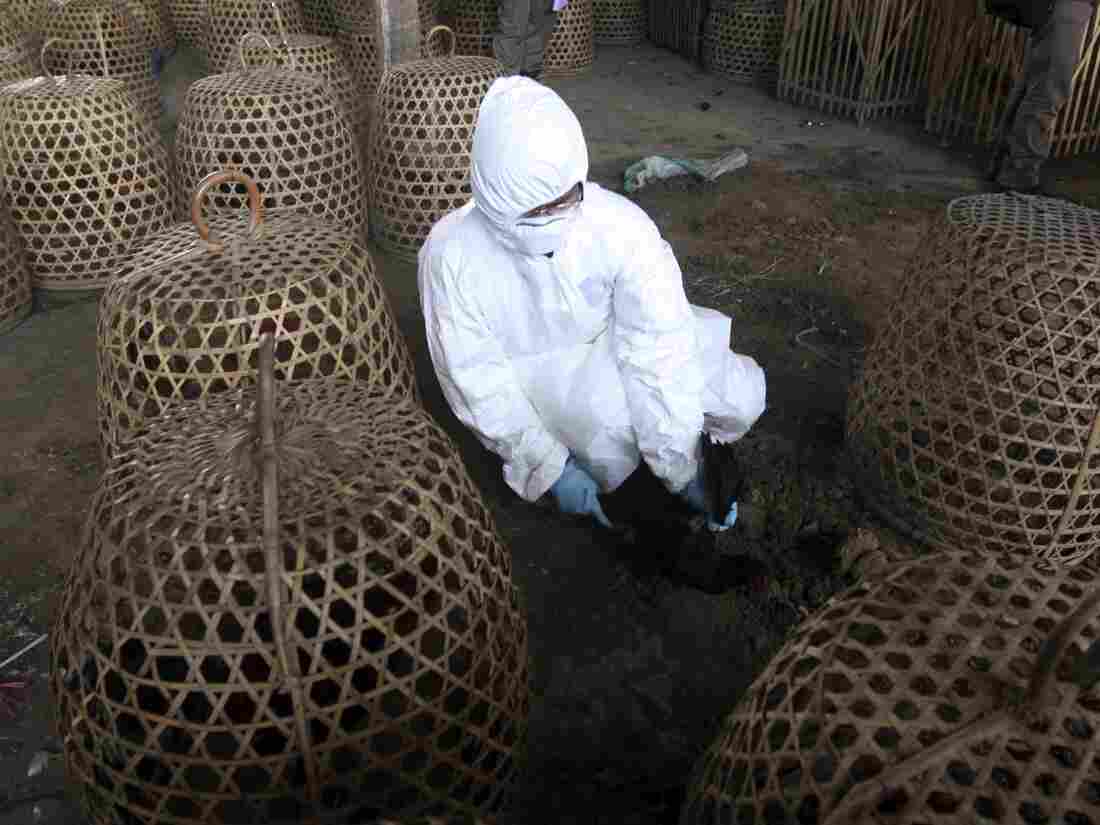 A government official in Bali, Indonesia, holds a chicken before administering an injection to cull it as a precautionary measure in April to prevent the spread of bird flu. Firdia Lisnawati/AP hide caption 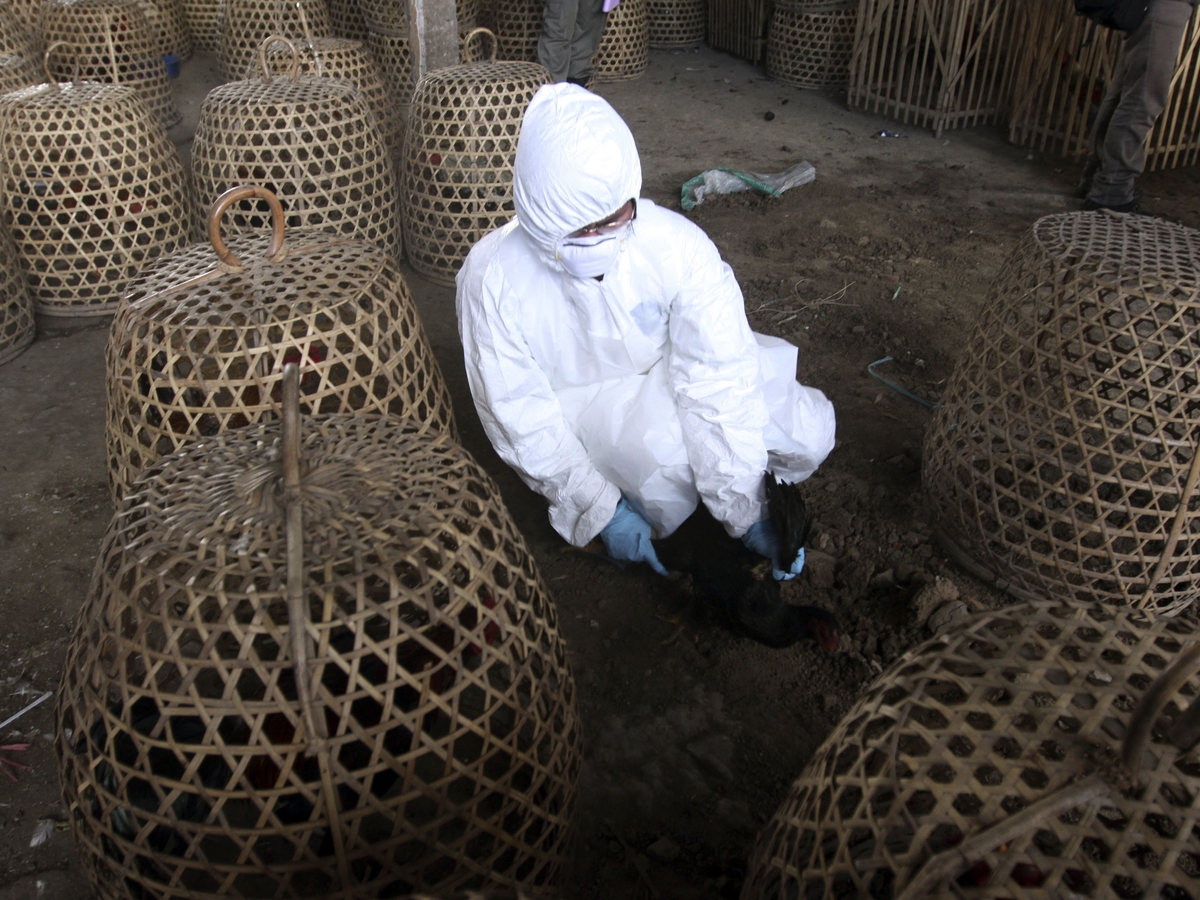 A government official in Bali, Indonesia, holds a chicken before administering an injection to cull it as a precautionary measure in April to prevent the spread of bird flu.

In a hotel ballroom in New York City, a couple hundred flu researchers watched with interest Monday as a government official ran down a list of seven kinds of experiments that could raise special security risks.

The official noted that one item on the list was any experiment that could make an infectious agent more transmissible, or contagious. "It wouldn't take long for this audience to come up with an example of that," he noted wryly.

He was referring, of course, to controversial experiments that showed how to alter bird flu viruses in a way that could make them spread in ferrets, the lab stand-in for humans. The work caused an international uproar late last year, as critics said if these viruses got out of the lab, they could cause a pandemic in people.

Scientists said their work is essential in trying to prepare for a pandemic that might occur naturally, but in January agreed to voluntarily put some of their work on hold, in what was supposed to be a pause that lasted 60 days.

It has now been more than six months, and the moratorium is still in effect. The meeting at the Times Square Marriott Marquis will include discussions on whether and how the work should go forward. The flu scientists who made the mutant viruses are attending, along with other researchers who signed the moratorium.

Simply stated, good science can be put to bad use.

Anthony Fauci, director of the National Institutes of Allergy and Infectious Diseases, which funded the controversial bird flu experiments, is set to lead an open discussion on Tuesday morning in a session called, "The Way Forward in Influenza Research."

The meeting was closed to the press. However, the night before the conference began, officials reversed that decision.

The first session of the conference Monday featured a talk that was a kind of primer for the researchers on something called the dual-use dilemma, the idea that legitimate science can pose risks in the wrong hands.

"Simply stated, good science can be put to bad use," explained Dennis Dixon of the NIAID.

In addition to reviewing types of experiments that might raise concerns, he described the new government policy put in place in March that aims to address this problem, by reviewing any of those experiments on a list of dangerous pathogens and toxins that includes highly pathogenic avian influenza.

He said the National Institutes of Health recently did a review of its supported research and found only a small number of projects that seemed to fall under the new policy. Some of them involve influenza.

During a panel discussion following his talk, some flu researchers raised questions about how the new policy would be implemented.

Ron Fouchier of Erasmus Medical Center in the Netherlands, whose lab did one of the recent bird flu experiments that raised concerns, said it wasn't clear what risks had to be mitigated for an experiment to be allowed to proceed, and to what extent those risks had to be minimized.

He also said that the policy's requirement for a risk benefit analysis before doing experiments seemed "very tough" to him.

"You can't weigh risks and benefits," Fouchier asserted, noting that if the benefits and risks for basic research are not quantifiable, "you're weighing two things that you can't weigh."

He also said that although concerns have been raised about so-called gain of function experiments that give pathogens new properties, like becoming more pathogenic or more contagious, such experiments are essential to truly understand how viruses work. "The proof of the pudding comes from the gain-of-function approach," said Fouchier. "There is no way around that."

His concerns were echoed by Peter Palese of Mount Sinai School of Medicine, who said: "I find some of these new rules and regulations actually quite frightening. And I am afraid that it will actually negatively affect our science. And so I would hope that there is a little bit of a push-back."

Palese said he hoped any regulations will continue to allow this kind of flu research to be done in the United States. "Otherwise it will be done in other countries and I am not so sure that's what we really would want," said Palese.

Scientists have an obligation to do risk-benefit analyses, "no matter how hard it is," said Mike Osterholm, a University of Minnesota professor who serves on a government committee that advises the government on dual-use research.

"I believe the work you did is very important, that it is very informing, and it needs to be continued," said Osterholm, speaking to the researchers sitting on the stage at the front of the ballroom.

But he said he sees a risk in a "business as usual" approach that would allow this technology to be freely communicated and distributed to other labs around the world that might not have the same oversight or safety. "The issue is enabling many parts of the world do to this work in a way that they wouldn't otherwise have done it," he said.

Osterholm warned that if a mutant bird flu virus ever escaped a lab, the government would clamp down on research in a way that would make the current regulations seem "very mild."