Accessibility links
Internet's Cat Obsession Justifies Itself In Cancer Ward : Shots - Health News An artist at a Seattle hospital turned a teenage leukemia patient's room into an art installation using nearly 2,000 photos of cats solicited through social media. "In the hospital, you feel cut off," says the patient. "So the photos made me feel like I was part of the world again." 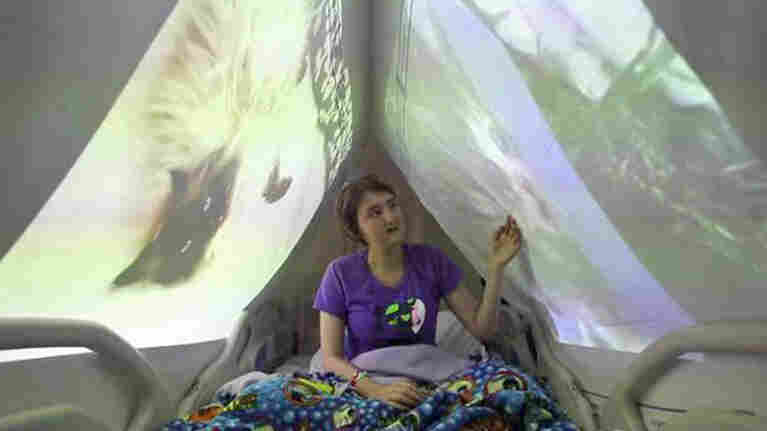 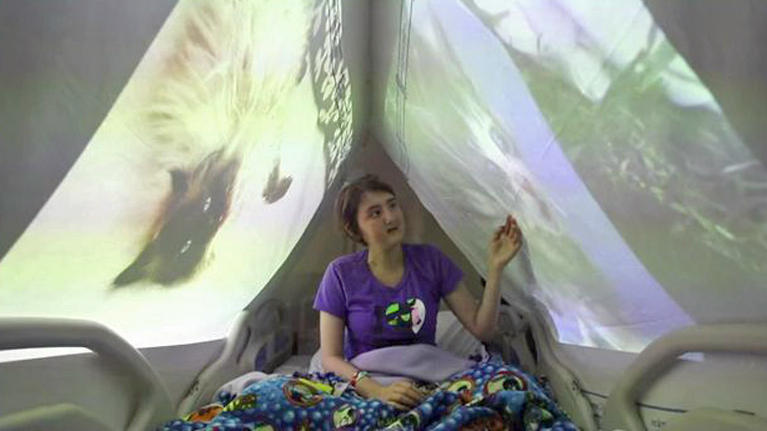 Maga Barzallo Sockemtickem, 16, received a bone-marrow transplant at Seattle Children's Hospital in 2011 for leukemia and returned in July 2012 for follow-up treatment. On July 25, an artist at the hospital set up a cat photo installation in her room.

We're not sure it's ever been studied, but we're willing to bet that the glut of cute animal photos on the Internet is a testament to their soothing effect on the human mind.

So imagine you're a cat lover who can't see your own cat because you're in an isolated hospital ward for an unknown duration. Sure, you could look at cat photos on your computer, but maybe you get tired of staring at the screen.

Imagine, then, a private four-hour screening of thousands of cat photos sent in by strangers projected on sheets draped over your bed. You lie back, relax, and watch the cats flash above you; there's even a purring sound to bring them alive.

This "cat immersion project" unfolded in Maga Barzallo Sockemtickem's room just a few weeks ago through an art project at Seattle Children's Hospital. Barzallo Sockemtickem, 16, is receiving treatment for graft-versus-host disease, an affliction that can occur after bone marrow transplants. She had a transplant in November 2011 after being diagnosed a year earlier with acute myeloid leukemia.

It all started because Barzallo Sockemtickem really missed her cat, Merry. She hadn't seen Merry in weeks, and it was all she could talk about with Artist-in-Residence John Blalock during one of his regular visits to her room.

Blalock, who has done photo and music video projects with several other patients in the hospital's Adolescent and Young Adult Cancer Program, says he thrives off the weird ideas that come up in his chats with patients.

"I've learned that whatever random idea you come up with from a brainstorm, that's the best idea," he says.

At first, Blalock solicited cat photos from other staff members. Then Barzallo Sockemtickem suggested that they post a request on the hospital's Facebook page — specifically photos of cats who, like Merry, would be greatly missed in case of separation.

Soon, more than 3,000 photos poured in. Some came over Facebook, others came as printed photos in the mail. Microsoft sent a cat calendar, someone else mailed in a cat care package with catnip and toys; another sent a book of cats wearing wigs.

"It was a big surprise, how big a response I got," says Barzallo Sockemtickem. "But I think it was the simpleness of it all. People love cats; animals make us happy."

Blalock hadn't expected that kind of response, either.

"We do these projects every day, and most don't take on a life of their own," says Blalock. "But people on the Internet love cats. And I guess anything that I have an emotional response to engages me, makes me invested."

On July 25, Blalock rigged up a tent made of sheets around Barzallo Sockemtickem's bed and projected 1,800 images he'd chosen for the slideshow. Watch the video of that day here:

The best part, Barzallo Sockemtickem says, was knowing that the photos came from other cat lovers outside the hospital.

"In the hospital, you feel cut off," she says. "You lose contact with regular people. So the photos made me feel like I was part of the world again."

Then she set about saying thank you to all of the people who sent photos. She hasn't responded to every single one yet, but she's made a huge dent, Blalock says.

Blalock, meanwhile, is scheming up new art projects; he's hoping to get a Skype robot to drive around the cancer ward.

"I think all hospitals are such a blank slate for doing art because you can take a medical experience and transform it," he says. "Installations [like the cat immersion project] are about changing an environment and making it a subversive experience. Patients have to spend so much time here and can't leave the room, so we transform the room with the resources we have."