Accessibility links
Why Is The World's Largest Foundation Buying Fake Poop? : Shots - Health News The Gates Foundation has granted engineers more than $3 million to develop cheap, high-tech toilets that don't need water or electricity. To test these supercommodes, the foundation has purchased 50 pounds of soybean paste that resembles human waste. 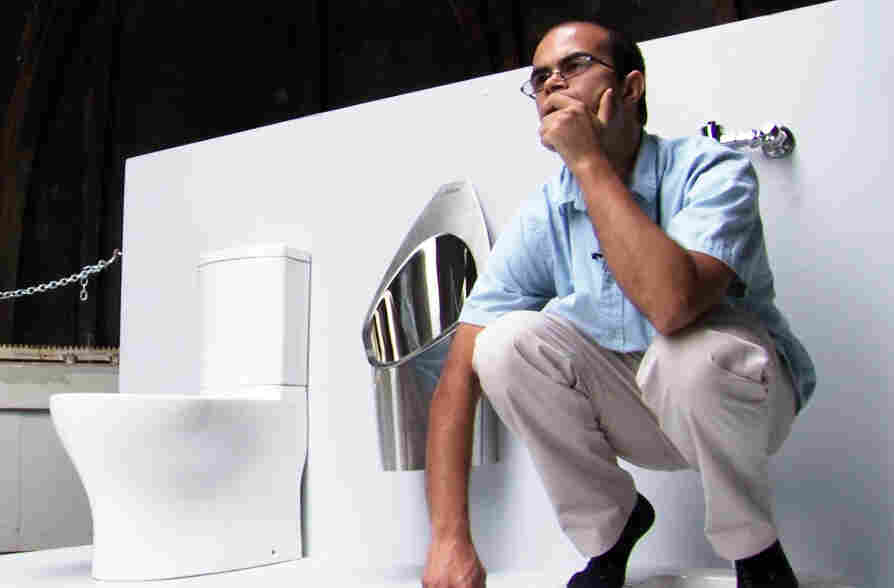 Graduate student Clement Cid sits atop the solar-powered toilet he helped to build at the California Institute of Technology in Pasadena, Calif. Underneath the platform, the toilet converts waste into fertilizer. The Caltech team will use fake feces to demonstrate the toilet's features next week at the Bill & Melinda Gates Foundation offices. Courtesy of Michael Hoffmann/Caltech hide caption 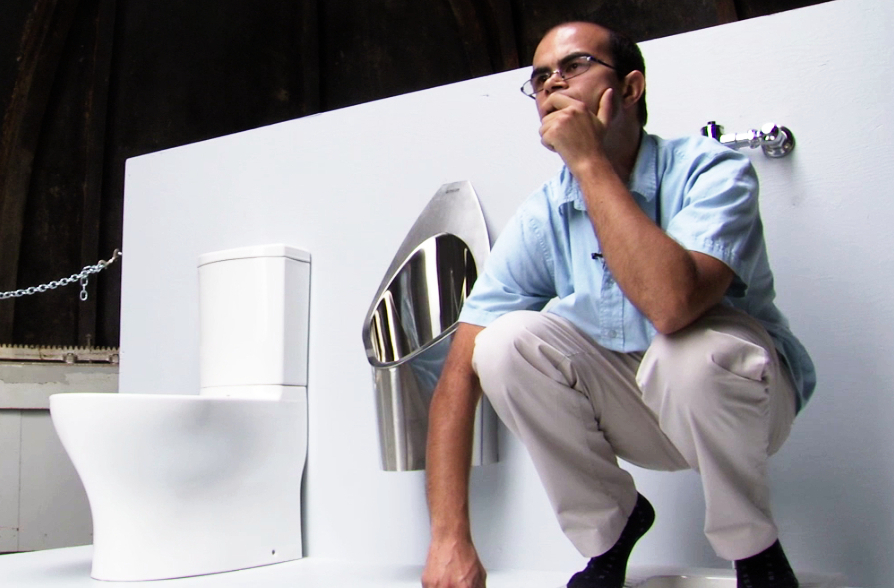 Graduate student Clement Cid sits atop the solar-powered toilet he helped to build at the California Institute of Technology in Pasadena, Calif. Underneath the platform, the toilet converts waste into fertilizer. The Caltech team will use fake feces to demonstrate the toilet's features next week at the Bill & Melinda Gates Foundation offices.

A practical joke? No, not in the least.

Nor is this synthetic poop a plastic replica of the real thing; it's an organic version made from soybeans. The Gates Foundation will use it to test high-tech commodes at their Reinvent the Toilet Fair next week.

Naturally, real poop would not be welcome inside the foundation's elegant Seattle offices. But if you're going to demonstrate how supertoilets could cut down the spread of diseases and reduce environmental footprints, you'd better have a reasonable substitute.

The Gates Foundation might be best known for its work on malaria and vaccines. But lately it has also taken an interest in sanitation, for good reason. More than 2.6 billion people in the world don't have access to clean toilets, and 1.5 million children die each year of diseases that could be prevented with decent sanitation. 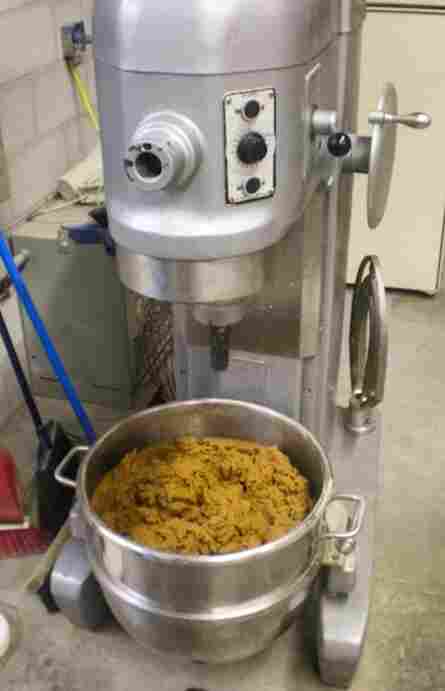 But in many places that lack sanitation, people also don't have good access to water or power. So last year, the Gates Foundation granted eight engineers around the world more than $3 million to develop cheap commodes that don't require water, electricity, or even a connection to a sewage system. The idea was that the toilets would be completely self-contained, and instead of releasing waste out into the world, they would produce clean water and nutrients useful for farming.

Since winning one of the $400,000 grants, Christopher Buckley from the University of KwaZulu-Natal in South Africa has been working on a toilet that dries and then burns feces into fertilizer.

"It's like a toilet that you'd find in the spaceship," the chemical engineer tells Shots. "The fecal matter itself powers the toilet, and you maybe have some energy left over to power the latrine's light and recharge your cellphone."

Another team from the California Institute of Technology has built a solar-powered commode that could charge hydrogen fuel cells. And a group from the Netherlands is converting waste into electricity with microwave technology. A climatologist from Stanford University is even trying to make charcoal that captures carbon from human waste.

On Aug. 14 and 15, the teams will demo their innovations in Seattle and in front of Bill Gates himself. Top performers will win more funding and the chance to have their devices deployed in the field.

The scientists need a standardized material for testing their toilets, and that's where the fake poop comes in. 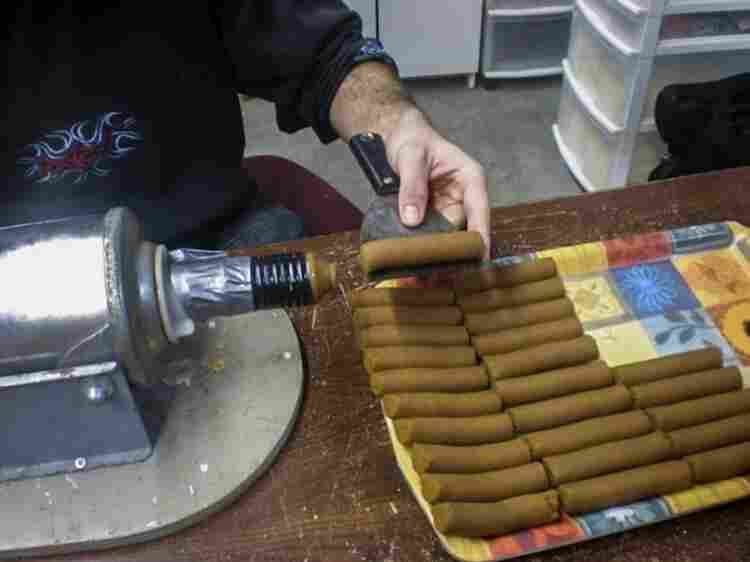 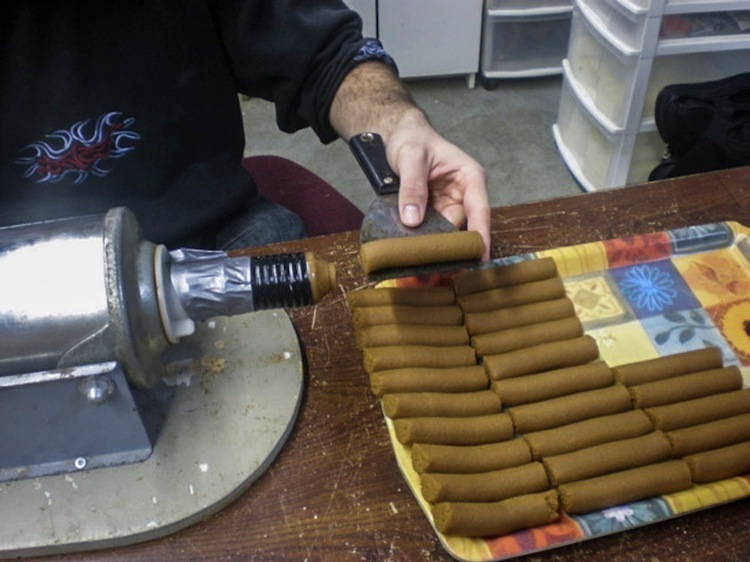 Soybean paste is extruded into 350 gram segments for testing in toilets.

They can't use the real stuff because it's a hazardous material, and of course, it's noxious. So the foundation turned to the experts of fake feces — Maximum Performance, which distributes synthetic poop to nearly all toilet manufacturers around the world for testing purposes.

The company first concocted the fake poop in 2003, and the recipe is simple. Soybean paste is mixed with a dash of rice to obtain the correct moisture level and consistency. The paste is then extruded through a sausage machine into 350-gram cylinders.

The fake poop is "very important from a technology perspective," Carl Hensman, who leads the water, sanitation and hygiene programs at the Gates Foundation, tells Shots. "You need to demonstrate what the equipment can do without having the real stuff around."

"There isn't a silver bullet for the sanitation problems," Hensman adds. "But when we put together very smart people, we have a much better chance of solving this problem."