Accessibility links
Bill Gates Crowns Toilet Innovators At Sanitation Fair : Shots - Health News During a festival this week at the Bill & Melinda Gates Foundation, scientists from around the world showcased the latest toilet technologies. Bill Gates himself awarded top-performing commodes, including a solar-powered toilet and one that dehydrates waste within 24 hours. 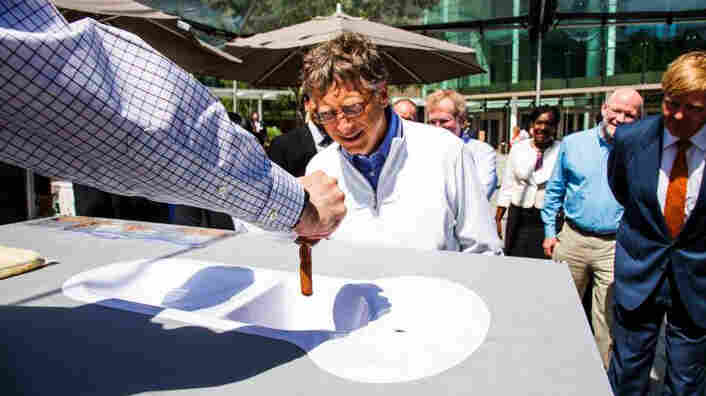 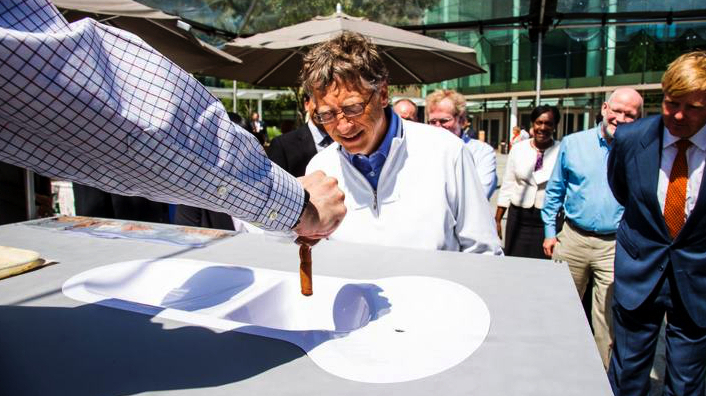 Bill Gates, co-founder of the the Bill & Melinda Gates Foundation, checks out a toilet demo at the Reinvent the Toilet Fair in Seattle, Wash. The festival featured prototypes of high-tech toilets developed by researchers around the world.

This week, Bill Gates was at a summer fair in Washington State, but he was not eating deep-fried butter on-a-stick, or checking out livestock.

Gates was inspecting cutting-edge toilet technology on display at an event his foundation hosted in Seattle — the Reinvent the Toilet Fair.

The centerpiece of the exhibit, as Shots reported last week, was a competition between eight teams of engineers to develop a super toilet that runs on a shoestring and doesn't need water or a sewage system. Many of those toilets use fake poop for demonstration purposes.

Gates announced the winners of the competition on Tuesday. You can listen to Wendy Kaufman's report on All Thing Considered for more details from the scene.

A team from the California Institute of Technology, lead by environmental engineer Michael Hoffmann, won the top prize of $100,000 for a solar-powered toilet that produces hydrogen and electricity.

A group from Loughborough University in the U.K. took second place for a toilet that uses energy from the feces to decompose the waste and recover clean water.

And chemical engineers from University of Toronto grabbed third place for their technology, which sanitizes waste within 24 hours by dehydration and smoldering.

In contrast to these high-tech commodes, the traditional toilets we know so well are clunky relics. They haven't changed much since the 18th century and require between 1.6 and 3 gallons of water per flush and a hookup to a expensive sewage system.

They are also luxuries that most communities around the world don't have. Some 2.5 billion people lack clean, safe bathrooms; this costly sanitation problem kills nearly 1.5 million children annually.

Over the past two years, the Bill and Melinda Gates Foundation has invested nearly $150 million into improving global sanitation, Carl Hensman, a program officer at The Gates Foundation, tells Shots.

The next step, Hensman says, is to take the top-performing technologies at the Reinvent the Toilet Fair and start making larger scale pilots. The foundation's goal is to have one of these super toilets up and running in a community by the end of 2014 or 2015.