Accessibility links
Global Smoking Survey Paints A Grim Picture : Shots - Health News While smoking in the U.S. has dropped a lot in the past decade, a global survey of smoking finds that nearly 50 percent of men in developing countries use tobacco. Without a reduction in smoking rates, future health costs could be large. 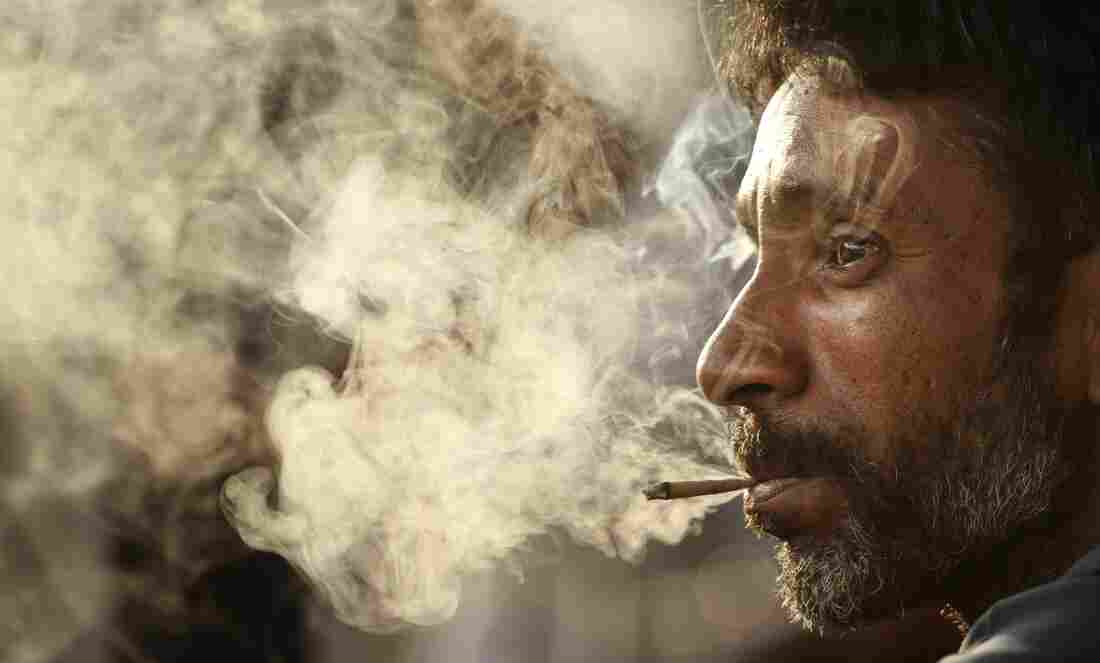 A man smokes a bidi on "No Tobacco Day," May 31, in Allahabad, India. These small, hand-rolled cigarettes are popular in India and Bangladesh because they are far cheaper than regular cigarettes. Rajesh Kumar/AP hide caption

Today we have a fresh look at smoking rates around the world, and the news isn't good.

A survey covering 60 percent of the world's population shows high rates of tobacco use in some countries, with more than 50 percent of men in Russia, China and Ukraine smoking between 2008 and 2010.

Although the statistics for women are better — only 11 percent of woman reported using tobacco — the number of people quitting is shockingly low, dropping below 20 percent in China and India.

"We haven't seen percentages like this since the 1950s in the U.S.," Gary Giovino, the lead epidemiologist on the study, tells Shots. "The data are just incredible. They demonstrate clearly that tobacco is a real problem globally."

In the study, Giovino and an international team interviewed nearly 250,000 adults in 14 low- and middle-income countries known to have a large number of smokers. Nearly half of the men interviewed said they used some form of tobacco. The findings were just published online by The Lancet.

By comparison, only about 20 percent of Americans are smokers, and tobacco use has dropped nearly 30 percent in the U.S. over the past decade, the Centers for Disease Control and Prevention reported in early August.

Giovino blames aggressive media campaigns from international tobacco companies for the high levels around the world. He says that the China National Tobacco Corp., which has a monopoly on cigarette sales there, has even sponsored the posting of signs in elementary schools linking smoking to academic performance.

In poor countries, only $1 is spent on smoking prevention for every $9,100 received in tobacco taxes. The researchers say governments should invest more of this revenue into anti-smoking campaigns and programs that help people quit. Otherwise, the medical and financial fallout from 850 million smokers worldwide could be enormous.

And Giovino says the health burden of tobacco extends far beyond the smokers themselves. "A high percentage of poor people go into poverty because they spend their money on tobacco instead of food for their family."