Accessibility links
Dr. Seuss On Malaria: 'This Is Ann ... She Drinks Blood' : Shots - Health News As a captain in the U.S. Army during World War II, Theodor Geisel created a booklet warning troops against the dangers of malaria and how to avoid contracting it. 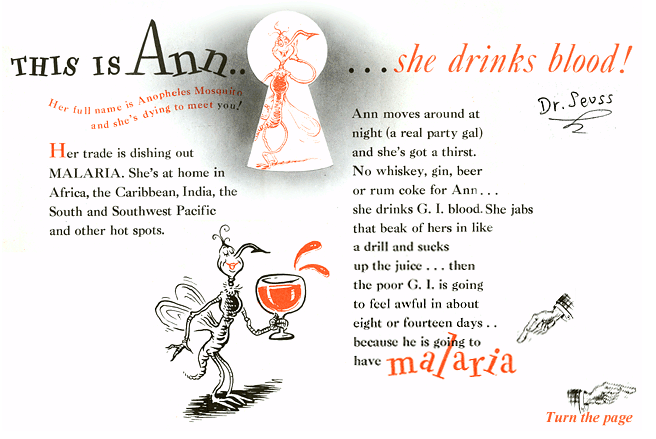 Before he cooked up green eggs or taught us to count colorful fish, Dr. Seuss was a captain in the U.S. Army. And during World War II, the author and illustrator, whose given name was Theodor Geisel, spent a few years creating training films and pamphlets for the troops.

One of Geisel's Army cartoons was a booklet aimed at preventing malaria outbreaks among GIs by urging them to use nets and keep covered up.

In 1943, Germany blocked the Allies' supply of the anti-malaria drug quinine. So Geisel created a booklet explaining to the troops how to avoid harmful encounters with "blood-thirsty Ann," the character he created to represent Anopheles, the genus of the mosquitoes that transmit the disease:

"This is Ann ... she drinks blood! Her full name is Anopheles Mosquito and she's dying to meet you!

"Ann moves around at night (a real party gal) and she's got a thirst. No whiskey, gin, beer or rum coke for Ann ... she drinks G.I. blood. She jabs that beak of hers in like a drill and sucks up the juice ... then the poor G.I. is going to feel awful in about eight or fourteen days ... because he is going to have malaria!"

Geisel also drew a map of the malaria epidemic around the world, which was printed on the back of a poster distributed by the U.S. War Department to disseminate news to troops.

These gems from Geisel's archive bubbled up on the Contagions blog today to mark the anniversary of Ronald Ross's discovery of the malarial parasite.