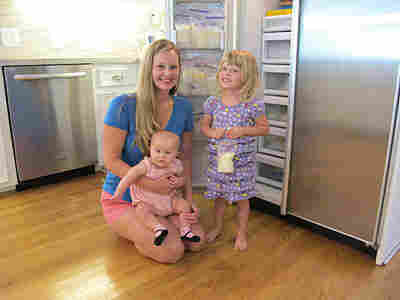 Ashley Beecher, 29, and her daughters Annie (on lap) and Charlie. After feeding Annie, Beecher donates her extra supply to the human milk bank at Texas Children's Hospital. KUHF hide caption

When Ashley Beecher had her first daughter, nursing was a struggle, and she sometimes had to supplement her baby's diet with formula. But when she had her second daughter in January, it was a very different story.

"Very early on I noticed [that] I've got so much more milk than what this child is drinking," said Beecher, a 29-year-old Houston mom, who started expressing her milk and storing it in plastic bags in her freezer. "There's probably, I would say, estimated around 50 bags containing six ounces of milk in each one and that's just what I have right now."

Beecher was reluctant to throw away the milk — mothers and doctors call it "liquid gold" because of its health benefits — so she was delighted to learn about the donor milk bank at Texas Children's Hospital in Houston.

The milk bank opened a year ago, with most of the donated milk going to premature infants. This summer, the hospital started offering donated milk to full-term infants, too, who are having trouble getting enough food in the first few days.

Laura Goodrum and her son, born by emergency Cesarean section in July at the hospital, benefitted from the new policy. Two days after birth, Goodrum's son had lost about a pound.

"We were tired. I, of course, was emotional, and we felt helpless. We wanted to do whatever it took to get him nourished," Goodrum said. She had hoped to avoid using formula, which doesn't have all the health benefits of human milk.

When the nurses offered donated breast milk, "I was very relieved and very grateful," Goodrum said. "They brought it in a minute or two, and it soothed him. You know, it was definitely what he needed."

"The science is pretty strong that human milk is best for human babies," said Speer.

As far as safety goes, milk donors are screened for drugs and disease, and the milk is pasteurized at a special lab in California. Donating moms receive an overnight shipping kit describing how to freeze, store and ship their milk in a special cooler on dry ice.

Nancy Hurst, director of Women's Support Services at Texas Children's Hospital, said the program is unlike others in the country because it was designed specifically to meet the needs of Texas Children's patients . "We qualify the donors, we pay for the milk to be processed and, ounce-for-ounce, the amount of milk donated is returned toTexas Children's for our patients," Hurst said.

For her part, Beecher says donating milk has almost become a part-time job, but it's worth it. "Some days I'll be like 'I just don't want to go sit at that pump,' " she said. "But then I think 'If I sit at that pump, maybe that particular donation will help save a baby's life' and that's all the motivation I need."

This story is part of a reporting partnership that includes member station KUHF in Houston, NPR and Kaiser Health News.