Accessibility links
Thalidomide Maker Apologizes After More Than 50 Years : Shots - Health News More than a half-century after a German drugmaker took thalidomide off the market because of birth defects, the company said it was sorry. The occasion was the dedication of a memorial to the victims near the company's headquarters. The sculpture features a girl with malformed feet and no arms. 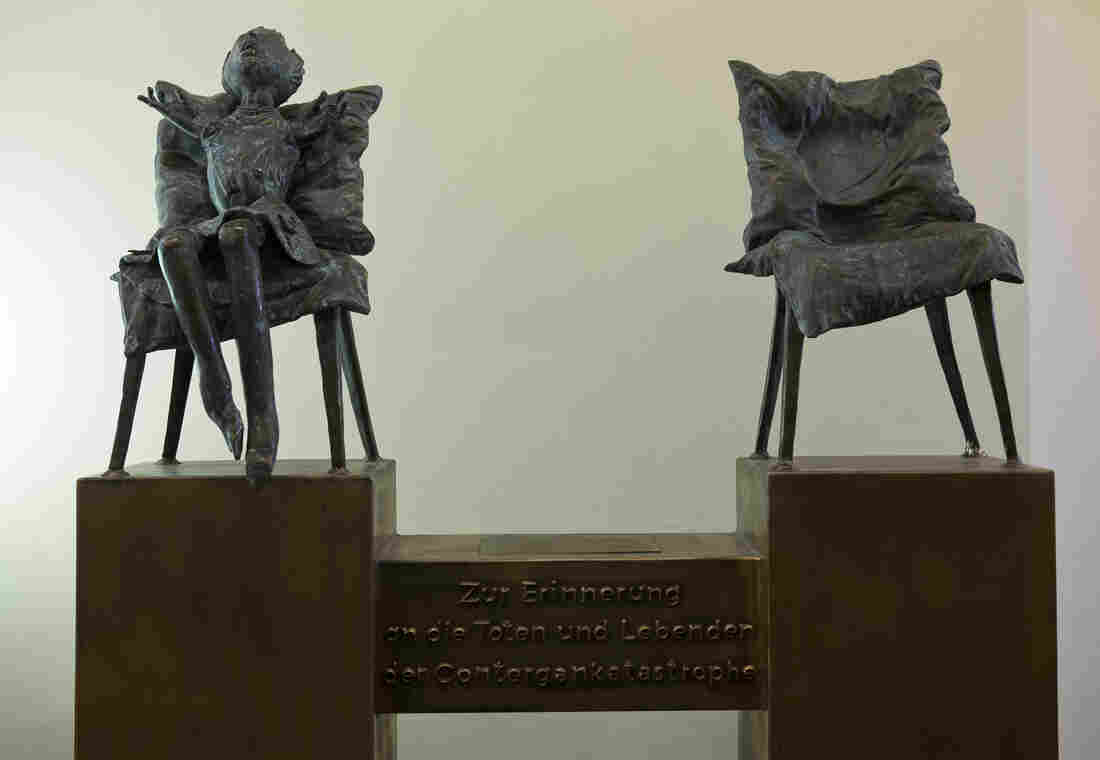 A sculpture by the artist Bonifatius Stirnberg memorializes the victims of thalidomide, a drug that caused thousands of birth defects. A translation of the German text below the chairs: "In memory of the dead and the survivors of the thalidomide catastrophe." Jens Schlueter/DAPD via AP hide caption

You've probably heard of thalidomide, the infamous sedative that ended up causing birth defects in the children of mothers who took it.

Back in the late 1950s, the drug was sold in 46 countries, though not the U.S., and was particularly popular in then-West Germany, the U.K. and Australia. But in 1961, the drug was taken off the market after the link to birth defects emerged.

By then, though, thousands of children had been born with deformities. There was a long trial in Germany, where Gruenenthal, the drug's maker, is based, that resulted in the establishment of a foundation to compensate victims. But victims have said the compensation wasn't enough and they faulted the company for not apologizing.

Today, more than a half-century later, Gruenenthal for the first time said it was sorry. The occasion was the dedication of a memorial to the victims in Stolberg, Germany, near the company's headquarters. The sculpture features a girl with malformed feet and no arms.

Gruenenthal CEO Harald F. Stock, according to a translation of his prepared speech, put it this way:

"On behalf of Gruenenthal with its shareholders and all employees, I would like to take the opportunity at this moment of remembrance today to express our sincere regrets about the consequences of Thalidomide and our deep sympathy for all those affected, their mothers and their families. We see both the physical hardship and the emotional stress that the affected, their families and particularly their mothers, had to suffer because of Thalidomide and still have to endure day by day."

"We also apologize for the fact that we have not found the way to you from person to person for almost 50 years. Instead, we have been silent and we are very sorry for that."

Even the memorial has sparked controversy. The idea for it came from Johannes Igel, a city clerk, and it drew support from the community of thalidomide survivors. Then, the city stipulated that Gruenenthal be involved, and the company agreed to help pay for it. That upset some survivors.

"We have chosen to support your cause, Mr. Igel, which is also the cause of many affected people," Stock said. He closed: "We wish that the Thalidomide tragedy had never happened. It is an important part of our thinking and acting — today as in the future."

Over the years, thalidomide was rehabilitated, and the drug has seen use as a treatment for leprosy and multiple myeloma. But it remains off limits for pregnant women.