Accessibility links
Doctors Take Aim At Epidemic Kidney Stones With Lasers : Shots - Health News A recent study found 1 in 10 American men and 1 in 14 women has had a kidney stone. Being obese or diabetic seems to raise the risk of getting them. Now lasers are becoming the treatment-of-choice for kidney stones in academic medical centers. 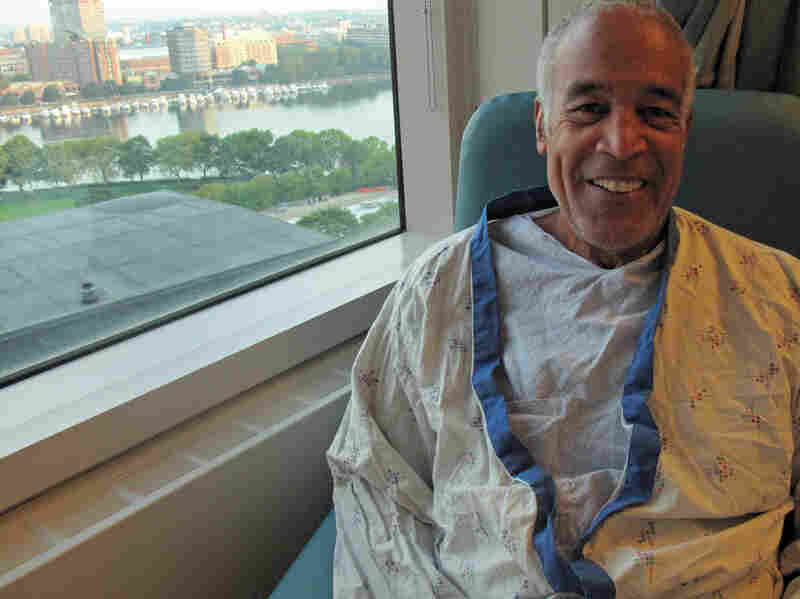 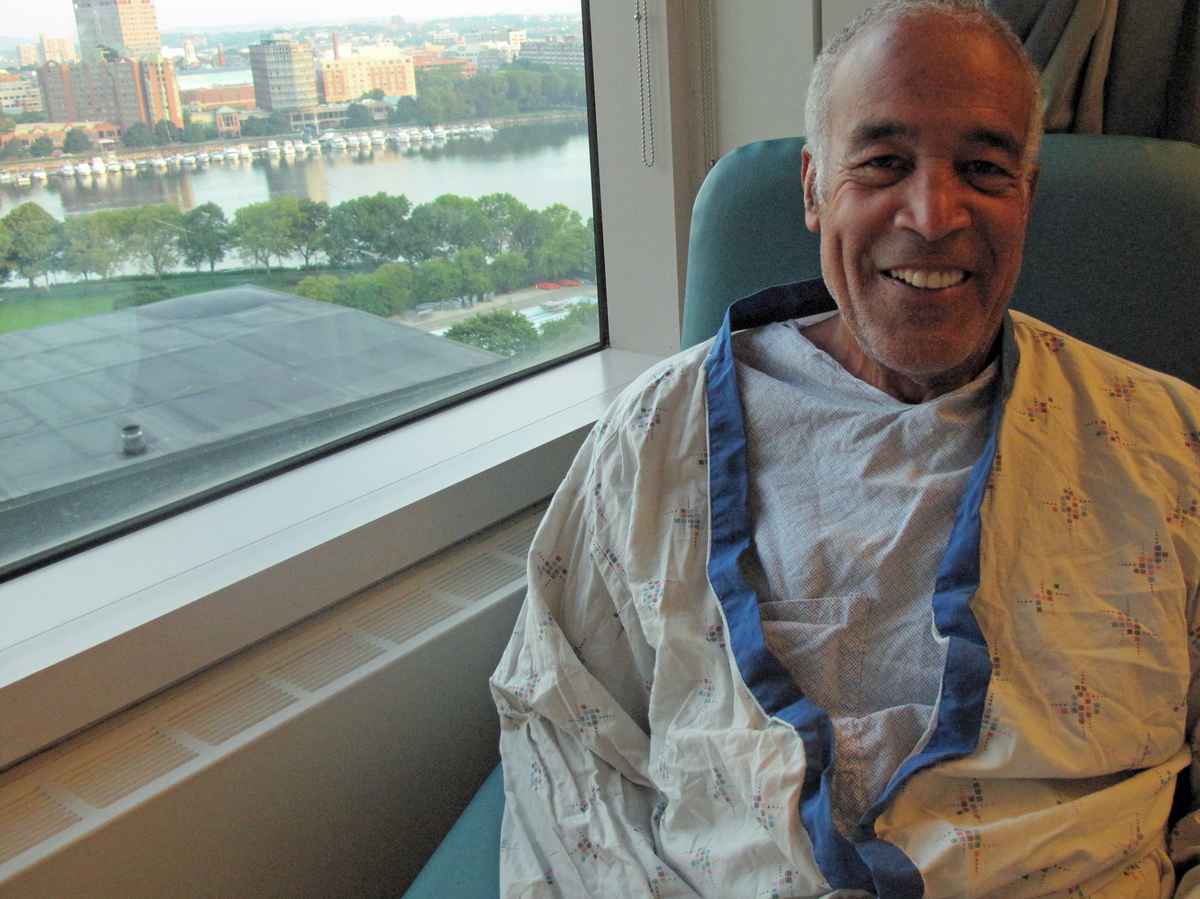 Henry Owens, a 69-year-old retired lawyer from Cape Cod, suffered a kidney stone attack last month. His doctor at Massachusetts General Hospital used a laser to break up the stone.

The nation is in the midst of a kidney stone epidemic.

New research shows 1 in 10 American men and 1 in 14 women has had one. And prevalence of kidney stones has shot up in recent years.

Experts had thought the disorder was increasing, but a study published this summer still surprised many by the steepness of the curve. "I'm not sure that people expected a near-doubling of kidney stones in the United States over the past 15 years," says Charles Scales, a urology researcher at University of California, Los Angeles, who led the study.

Since kidney stones aren't fatal, the problem doesn't get much attention. But they're no joke.

"I've had female patients tell me that the pain is actually worse than delivering a child without anesthesia," Scales says.

"Oh, the pain was so much that you'd be nauseous," says Henry Owens, a 69-year-old retired lawyer from Cape Cod, Mass., who suffered a kidney stone attack last month. "The pain was excruciating."

A CT scan revealed Owens had three kidney stones, two of which were blocking one of his ureters — the two tubes that carry urine from the kidney to the bladder. The third and largest was still in his kidney.

A doctor installed a tube called a stent that allows urine to bypass the stone. That was just a pain-relieving stopgap. Later, urologist Dianne Sacco performed a procedure called ureteroscopy to smash Owens' kidney stones with a laser.

Owens and Sacco allowed this reporter to watch the procedure at Massachusetts General Hospital.

With Owens under general anesthesia, Sacco passes a thin tube through his urinary passage into his bladder. A flexible fiber-optic cable gives her a sharp picture on a screen above the operating table. 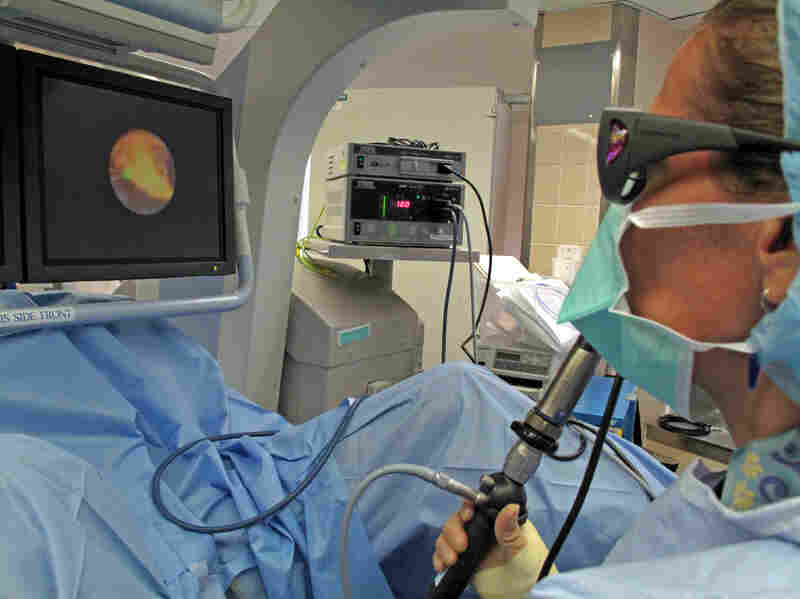 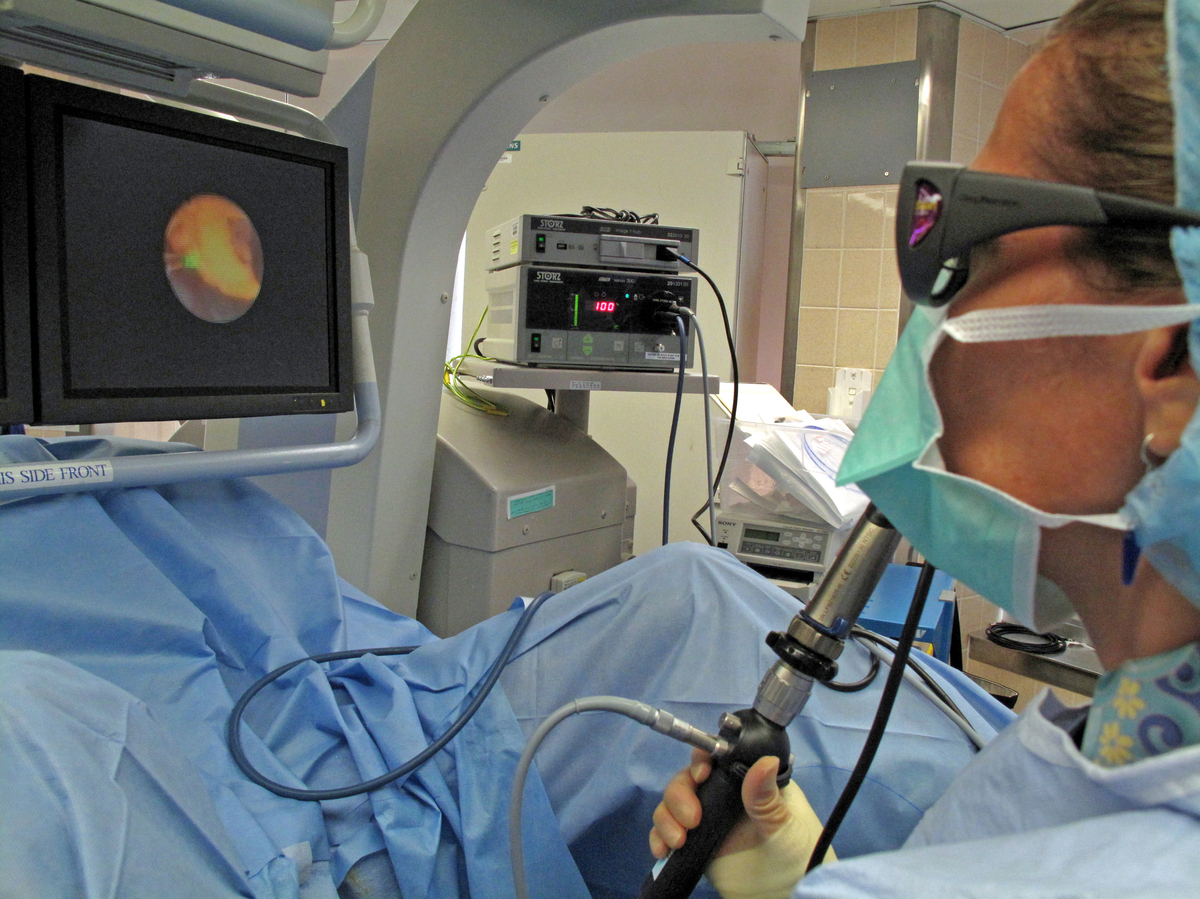 Dr. Dianne Sacco of Massachusetts General Hospital uses a laser ureteroscope to pulverize a kidney stone in Henry Owens. The screen shows a magnified image of the stone, an irregular yellow shape.

Lasers are becoming the treatment-of-choice for kidney stones in academic medical centers like the Mass General. Another alternative is so-called shock-wave lithotripsy, in which a machine uses high-energy sound waves to smash stones. The advantage is that it's noninvasive, that is, it doesn't require putting any equipment into the body.

Sacco says she likes the precision of laser scopes. "I can see what I'm doing; I can tell how big my fragments are," she says. And there's a better chance of rendering patients stone-free with a single treatment.

But Owens has about a 50 percent chance of developing another kidney stone. To better those odds, Sacco will send his stone fragments to a lab and analyze a 24-hour sample of his urine. That will tell her just what dietary changes Owens needs to make and whether he'll need to take medicine to avoid another painful stone.

Sacco says one probable reason for Owens' kidney stones is that he has type II diabetes. Another is that he was obese before he lost 50 pounds.

"It all goes together," she says. "The overweight problem leads to the diabetes. I think that's definitely one of the reasons why we're seeing so many more patients with stones."

Scales, the UCLA researcher, says that's what his new study found. "It's the first nationally representative sample that was able to show that linkage," he says.

As good as medicine has gotten at treating kidney stones, Scales says, the magnitude of the problem requires a new focus on preventing them.

"Kidney stones are composed of minerals the body doesn't need," Scales says. "The reason a kidney stone forms is that there is essentially too much of these minerals in the urine."

For instance, most kidney stones contain calcium. But the reason, Scales says, is not primarily an issue of too much calcium in the diet; it's too much sodium, as in salt.

That's because cells in the kidney use a chemical pump to get rid of excess sodium. The same mechanism also deals with calcium. "The key concept is that the excess sodium drives the kidneys to put out more calcium," Scales explains, and that leads to the formation of stones.

Doctors used to advise kidney stone patients to eat less calcium, but not anymore. Too little calcium can actually increase the risk of kidney stones because one of calcium's jobs is to bind a chemical called oxalate found in spinach, nuts and other foods. Too little calcium leads to too much oxalate, another frequent component of stones.

The best dietary advice, Scales says, is to drink lots of fluids. Beyond that, he says to lay off salt-rich processed foods, cut down on meat and other animal protein, and generally take in fewer calories.

For those who are at high risk — those who've already had a stone, for instance — doctors might also recommend a medicine such as potassium citrate, if people have low levels of dietary citrate in their urine. Citrate, which is found in lemons and limes, can protect against kidney stones.