Accessibility links
Two Mutations Can Transform A Swine Flu Virus : Shots - Health News An influenza virus that only infects pigs could very quickly lead to a dangerous flu pandemic in humans, a recent study reports. Results of an experiment in ferrets, a model for flu in humans, suggest that a swine flu virus can mutate into a contagious and fatal disease within 10 days. 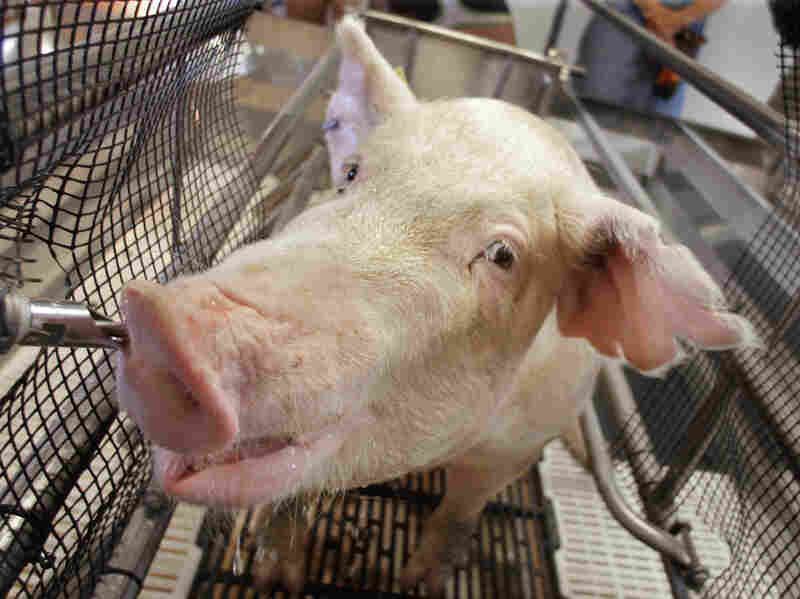 A hog gets a closeup at the Illinois State Fair in August. Officials took special precautions to make sure no livestock sick with a new strain of swine were part of the fair. Seth Perlman/AP hide caption 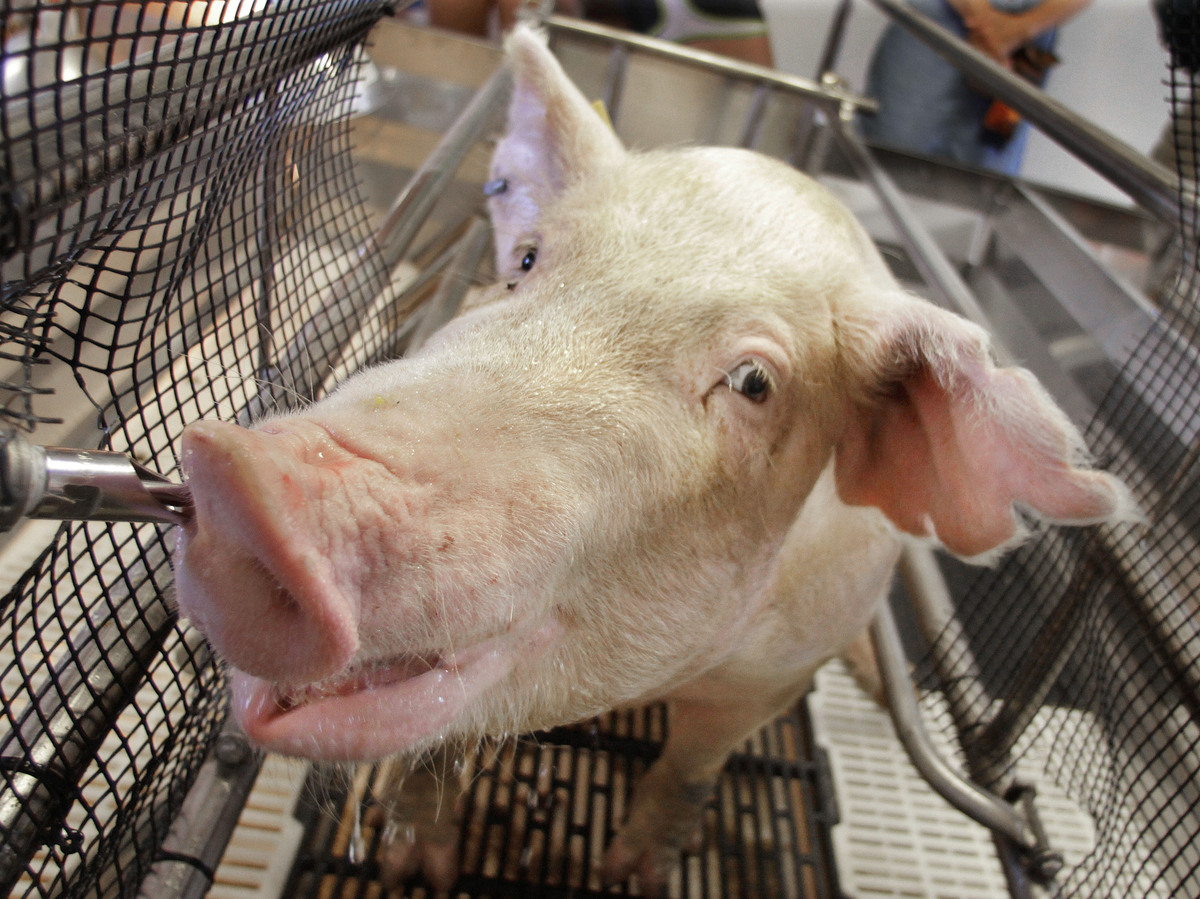 A hog gets a closeup at the Illinois State Fair in August. Officials took special precautions to make sure no livestock sick with a new strain of swine were part of the fair.

Flu pandemics don't happen very often. So many people might feel the relative fizzle of a flu pandemic three years ago somehow immunizes the globe against another one for awhile.

But don't relax, say the authors of a report published online in the Proceedings of the National Academy of Sciences.

The scientists detail how a swine flu virus currently circulating in Korea — without apparently making the pigs sick — quickly changed into a deadly flu virus when it was put into ferrets. That mammal is considered most like humans when it comes to influenza.

Once in ferrets, the virus acquired two new mutations that somehow conferred unusual virulence. Infected ferrets died within 10 days and transmitted the virus easily to other animals in respiratory droplets. The mutations occurred in all three ferrets infected with the Korean pig virus.

To be sure, this nasty mutant poses no immediate public health threat and may never pop up outside the Korean lab.

"We scanned the database to look whether or not this particular mutation is showing up in swine influenza viruses or viruses transmitted from pigs to people and we don't find that mutation in nature," chief flu researcher Nancy Cox of the Centers of Disease Control and Prevention told Shots.

Still, the PNAS authors say the Korean experiment sounds a clear warning that swine flu viruses could transform again into human flu bugs with pandemic potential, as they did in 2009.

The 2009 pandemic officially killed 18,500 deaths but the death toll may have been as high as 285,000. It was caused by a so-called triple-reassortant virus with elements of pig, human and bird viruses. It began to circulate widely in North American pigs during the late 1990s.

"The message from this paper and from what's going on with swine in the U.S. is that these viruses are very prone to pick up new genes and produce viruses that are a threat to humanity," Webster told Shots. He's a leading flu expert at St. Jude Children's Research Hospital in Memphis.

By "what's going on with swine in the U.S." Webster is referring to swine flu infections among people at state and county fairs this summer. Two new flu viruses have emerged in pigs and infected people who have close contact with them — farmers, their families and fair-goers.

Most of the victims have been children. "Let's suppose that one of the triple reassortants circulating in the US picks up these two mutations they've picked up in Korea," Webster says. "My God, those kids would be dead!"

So far, nearly 300 people have caught one of these new swine flu infections, caused by a strain called H3N2 that swapped genes with the pandemic H1N1 virus, which emerged in 2009 and is now widely circulating in US swine herds. A 61-year-old woman died from the new strain, but others have had largely mild bouts of illness.

Cox says one reason these new swine viruses are turning up is that the CDC and the U.S. Department of Agriculture are looking much more closely at pig flu viruses since the pandemic of 2009. "I haven't seen the same increase in surveillance from other countries," Cox says. The new Korean evidence "increases the importance of doing swine influenza surveillance globally."

But Cox says the CDC isn't too worried about the Korean ferret virus because it probably would have trouble gaining a foothold in human populations should something like it emerge outside the lab.

Cox says the Korean ferret virus is similar enough to viruses already circulating in humans that "we would expect the pandemic potential of these viruses to be low."

That's because most humans already have antibodies to similar viruses, either from flu vaccines or from having been infected with the pandemic H1N1 and its close cousins. But experimental ferrets don't have these antibodies.

That's not to say there isn't a pig flu virus out there that's only a mutation or two away from a new flu dangerous to humans. "With the pandemic H1N1 virus entering the pig population and reassorting like mad," Cox says, "we may have a different dynamic. We're having new gene constellations develop in pigs."