Accessibility links
Botswana Doctors Stop Cervical Cancer With A Vinegar Swab : Shots - Health News Women with HIV have a high risk of getting cervical cancer, but the traditional screening method for the disease — a pap smear — isn't available in many poor countries. Now doctors have developed a cheap, simple alternative way to detect cervical cancer, and it's saving lives in Africa and Asia. 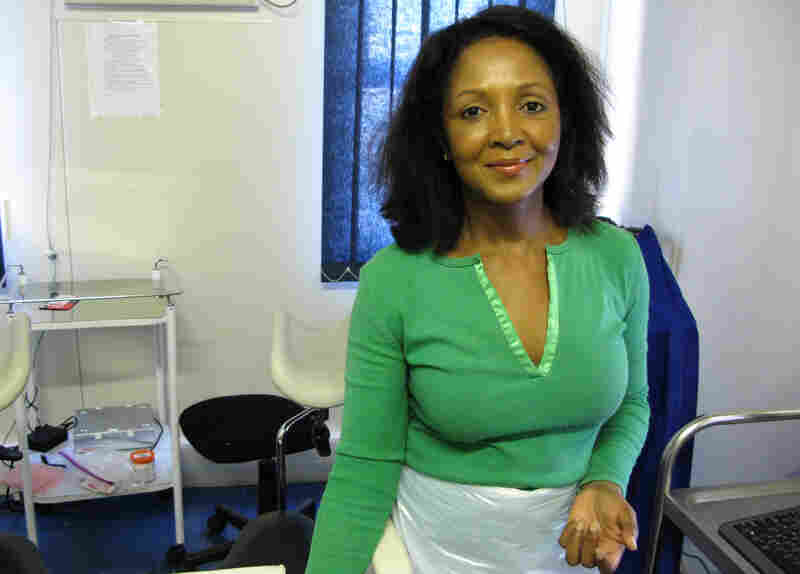 Doreen Ramogola-Masire, an obstetrician-gynecologist in Botswana, hopes that a simple, quick screen for cervical cancer with vinegar will catch the disease early and save women's lives. Jason Beaubien/NPR hide caption 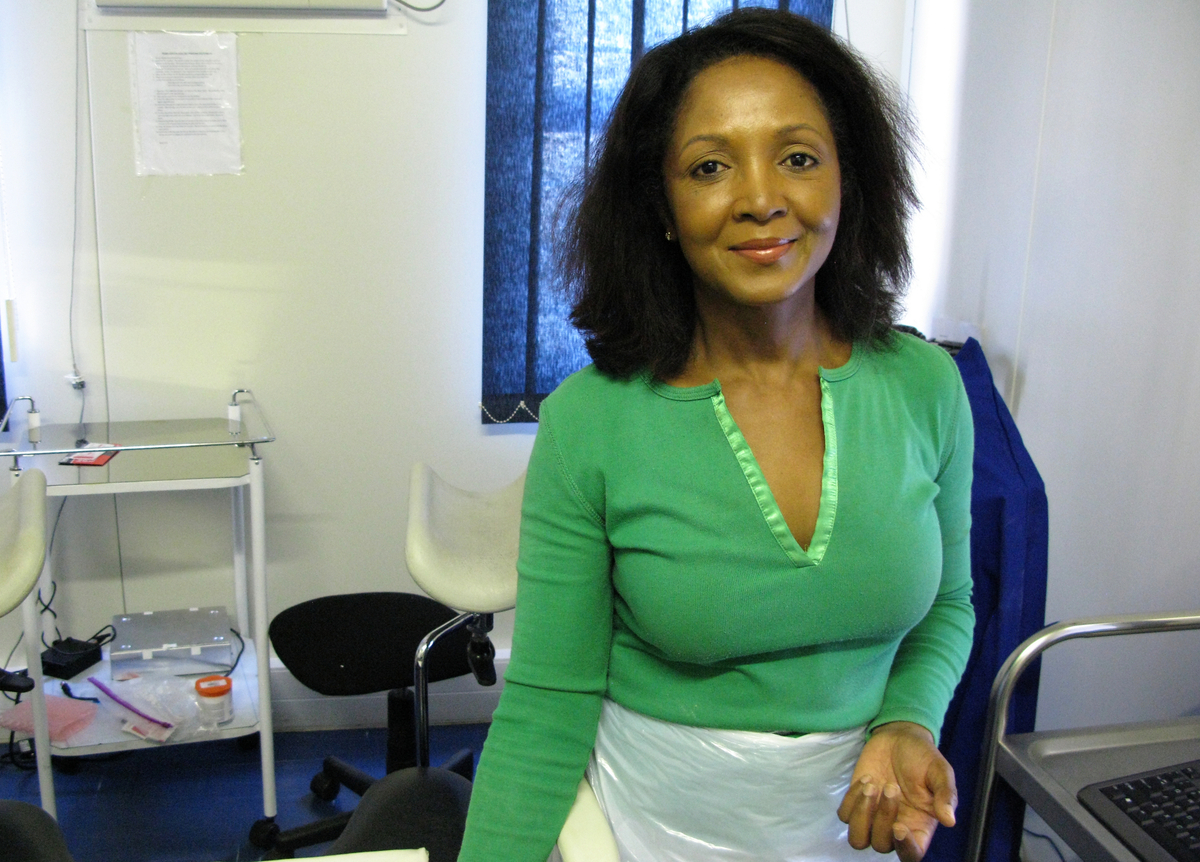 Doreen Ramogola-Masire, an obstetrician-gynecologist in Botswana, hopes that a simple, quick screen for cervical cancer with vinegar will catch the disease early and save women's lives.

In the U.S., the pap smear has become a routine part of women's health care, and it's dramatically reduced cervical cancer deaths. But in Africa and other impoverished regions, few women get pap smears because the countries lack the laboratories and other resources necessary to offer them.

The World Health Organization reports that more than 80 percent of deaths from cervical cancer now occur in low-income nations. Thus, there's a push to come up with a new, low-tech way to screen women for cervical cancer in the developing world.

Now doctors think a bit of vinegar may be a solution.

"We have already seen that the pap smear hasn't worked as a public health intervention for preventing cervical cancer in low and middle-income countries," Ricky Lu, an obstetrician-gynecologist with the international health group Jhpiego, which is associated with Johns Hopkins University.

Lu is promoting a cervical cancer screening technique in which a nurse or a midwife simply swabs a woman's cervix with vinegar (or diluted acetic acid) and then looks with the naked eye, or a magnifying glass, for pre-cancerous lesions. The screening technique requires only vaginal spoons, vinegar and a bit of training. It can be performed in the simplest health clinics without a need for laboratory tests or even electricity.

In the developing world, Lu says, public health providers need a cervical cancer screening tool that is fast, easy and inexpensive. "We need a test that is simple, practical and good enough to identify precancerous lesions," he says. "And then also it's critical that it is available where women come [for health care]."

When a health care provider spots a precancerous lesion with the vinegar test, it can often be removed immediately, and the entire procedure takes only a few minutes.

At least six countries in Africa have now adopted the technique as part of their public health care systems, and it's also caught on in Thailand and parts of Asia.

Doreen Ramogola-Masire, an obstetrician-gynecologist in Botswana, is using a similar approach. One of the key elements of the technique, she says, is that women can be tested and treated in a single visit.

Ramogola-Masire simply swabs a woman's cervix with vinegar and then looks for any potentially cancerous lesions, which appear as white tissue. If pre-cancerous lesions are present, she freezes them with nitrous oxide.

"She's lying on the couch," Ramogola-Masire says. "You look at [the cervix], you wash it with vinegar. You take a picture. You can immediately review the picture because you've got a screen. So you can say to them, this is the white change. I think this is where the abnormality is. We are going to freeze it. What happens is the freezing actually takes care of the top layer. You just sluff that off. And hopefully you've taken care of the problem."

Almost all cervical cancer is caused by the human papillomavirus. There appears to be higher rates of HPV and cervical cancer among women with HIV, Ramogola-Masire says. Botswana has one of the highest rates of HIV in the world, with nearly a quarter of all adults believed to be HIV positive.

In the early days of the AIDS epidemic, Ramogola-Masire says, cervical cancer wasn't much of a concern because women with HIV weren't living long enough for the cancer to develop. Once cervical cancer has spread, it's difficult to treat, particularly in poor countries with limited health resources.

If caught early, cervical cancer is easily treatable. If not, Ramogola-Masire says, it's a terrible death. "It invades you nerves at the spine at the back, so you are in a lot of pain," she says.

"The other thing is that because there's a lot of dead tissue, you smell. There's a lot of bleeding. You're incontinent. You're in pain, you're bleeding ... I think it's just a horrible disease to die from."

Ramogola-Masire hopes that the widespread adoption of cervical cancer screening with vinegar in the developing world can help prevent those horrible deaths.