Accessibility links
Link Between BPA And Childhood Obesity Is Unclear : Shots - Health News In a study, researchers found that among white kids and teens, higher BPA levels were associated with more than twice the risk of obesity. But higher BPA levels didn't affect childhood obesity risk for blacks and Hispanics. 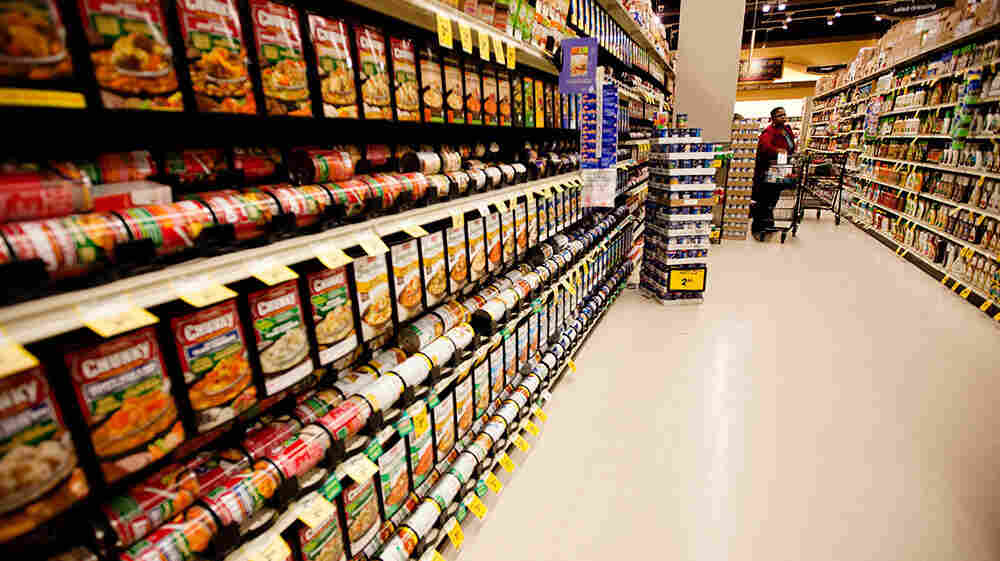 Canned food is a source of BPA exposure, but researchers aren't sure whether it causes childhood obesity. Above, the soup isle at a grocery store in Washington, D.C. Maggie Starbard/NPR hide caption

BPA could be making kids fat. Or not.

That's the unsatisfying takeaway from the latest study on bisphenol A — the plastic additive that environmental groups have blamed for everything from ADHD to prostate disease.

Unfortunately, the science behind those allegations isn't so clear. And the new study on obesity in children and teens is no exception.

Researchers from New York University looked at BPA levels in the urine of more than 2,800 people aged 6 through 19. The team wanted to know whether those with relatively high levels of BPA were more likely to be obese.

But the results, published today in the Journal of the American Medical Association, didn't offer a simple answer to that question.

Among white kids and teens, higher BPA levels were associated with more than twice the risk of obesity. With black and Hispanic youth, though, BPA levels didn't make a difference.

"When we find an association like this, it can often raise more questions than it answers," says the study's lead author, Leonardo Trasande, an associate professor of pediatrics at New York University. There's no obvious reason why one group of kids would be affected by BPA while another group wouldn't, he says.

Also, there's no way in this study to know whether BPA is actually causing kids to put on weight, says Frederica Perera, who directs the Columbia Center for Children's Environmental Health. "Obese children may be simply eating and drinking foods that have higher BPA levels," she says.

And even if BPA is playing a role in weight gain, it may be just one of many chemicals involved, Perera says.

"Our center has recently published a study showing that exposure to another group of endocrine disruptors, polycyclic aromatic hydrocarbons or PAH, was associated with obesity in the children," Perera says. Those hydrocarbons are typically a part of air pollution in cities.

Some of the uncertainty about BPA may come because the researchers had no way of knowing how much exposure kids in the study may have had in the womb — the time many scientists believe chemical exposure is most likely to have a lifelong effect.

"Clearly we need a longer term study that examines exposure in the earliest parts of life," Trasande says. Even so, he says, it may be time to rethink childhood obesity.

"Diet and physical activity are still the leading factors driving the obesity epidemic in the United States," Trasande says. "Yet this study suggests that we need to also consider a third key component to the epidemic: environmental factors that may also contribute."

The study clearly does not answer the question many parents have, says Mike Dedekian, who runs the pediatric obesity clinic at the Barbara Bush Children's Hospital in Portland, Maine.

"Does BPA cause obesity? We don't know yet," he says. "Does this study raise our level of concern? Yes it does, and it means we need to go further in science to establish whether there is more to this than just an association."

Dedekian says in the meantime, he hopes parents will stay focused on how much exercise their kids are getting, and what they're eating.

Regulatory agencies seem to agree that the science on BPA is far from definitive.

The FDA banned BPA from sippy cups and baby bottles this summer, but only after the plastics industry requested the action as part of an effort to reassure consumers.

A few weeks earlier, the agency rejected a call by environmental groups to remove BPA from all products that come in contact with food, saying the evidence of harm just wasn't there.