Accessibility links
Are There Health Benefits To Squatting On The Pot? : Shots - Health News Passionate advocates believe that squatting over the toilet is a more healthful position than sitting down on one. They say the posture can alleviate problems like hemorrhoids. One company is making stools to help people get closer to the squat. 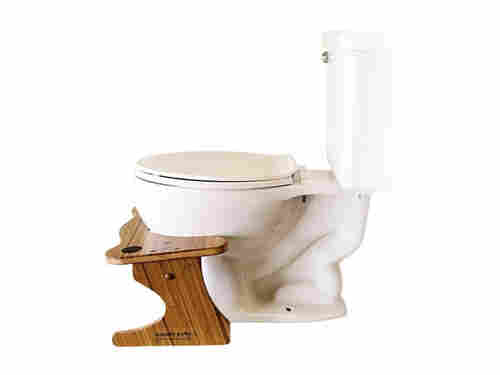 A contractor designed the Squatty Potty to help his mother get closer to the squatting position on the john. Courtesy of Squatty Potty hide caption

We at Shots don't shy away from talking about poop, as Michaeleen Doucleff demonstrated last month with her post on the Bill & Melinda Gates Foundation's investment in fake feces.

Poop talk may strike some as juvenile, but many people in the world don't have a safe way to do their business. And by age 50, about half of American adults have experienced hemorrhoid symptoms, according to the Mayo Clinic.

Which brings us to a discussion that's been simmering since at least the 1960s. Is the modern toilet at least partly to blame for problems like hemorrhoids and constipation?

Some architects and doctors have posited that squatting may be the more natural position for us to do our business. That's spawned a sort of squatting counterculture and a budding industry to go with it.

As neuroscientist Daniel Lametti wrote in Slate in 2010, squatting allows the, er, anorectal angle to straighten, so that less effort is required for evacuation. And today there are lots of squatting evangelists on the Internet who marshal scientific evidence, limited as it may be, and ample cultural evidence of the practice enduring in many parts of the world to make their case that squatting is superior.

But not everyone who might want to experiment with squatting can actually squat safely or comfortably, especially elderly folks with bowel movement issues. Enter Squatty Potty, a product launched by Robert Edwards, a 37-year-old contractor and designer in St. George, Utah. The story really starts with his mother, who was suffering hemorrhoids and constipation and had resorted to raising her feet with a step stool while on the john, for some relief.

The bulky step stool took up too much space, so Edwards offered to make her one that would fit snugly around the base of the toilet when not in use.

The family experimented with different prototypes and soon realized there was a market for such a product. In the last year, Edwards says without any advertising he has sold 10,000 Squatty Pottys (they start at $34.95) — a testament to the revival of squatting in the U.S. And he says he has become more convinced that the modern toilet is the cause of many people's bowel issues.

"The modern toilet has been sold to us as civilized, but the straining that sitting causes is not healthy," Edwards tells Shots. Squatting, on the other hand, or getting closer to squatting with the help of the Squatty Potty, can end hemorrhoids, prevent colon disease, improve pelvic floor issues, and offer numerous other benefits, he asserts.

We wondered what doctors had to say about all this, so we called up Rebekah Kim, a colorectal surgeon at the Center for Pelvic Floor Disorders at Virginia Hospital Center. Kim sees a lot of older women like Roberts' mother who've developed conditions that make defecation difficult.

Kim says one of the first things she tells patients who struggle on the john is get a stack of telephone books or a stool to rest their feet on – an option not unlike the Squatty Potty. But she says many of the claims Squatty Potty makes haven't been well tested.

"Squatting on a stool can reduce the amount of straining on the toilet, which may mean less hemorrhoids, but there are no clinical studies proving that," she says.

So does this mean everyone should consider abandoning the more comfortable position of sitting for the potentially preventative position of squatting? No, says Kim.

"For most people, the modern toilet doesn't cause any problems," she says. But if you're to believe Slate's Lametti, squatting on top of the toilet could be a time-saver — he managed to drop his 10-minute routine down to a minute.