Accessibility links
Doctors Sift Through Patients' Genomes To Solve Medical Mysteries : Shots - Health News Doctors used genome sequencing to put a name to the mysterious cluster of symptoms that afflicted Christian Terry, 5. He's one of many patients now getting the test, which can cost as little as $1,000, to resolve undiagnosed illnesses. Doctors are also using it to sequence cancer and target treatment at the precise genetic mutations in a tumor. 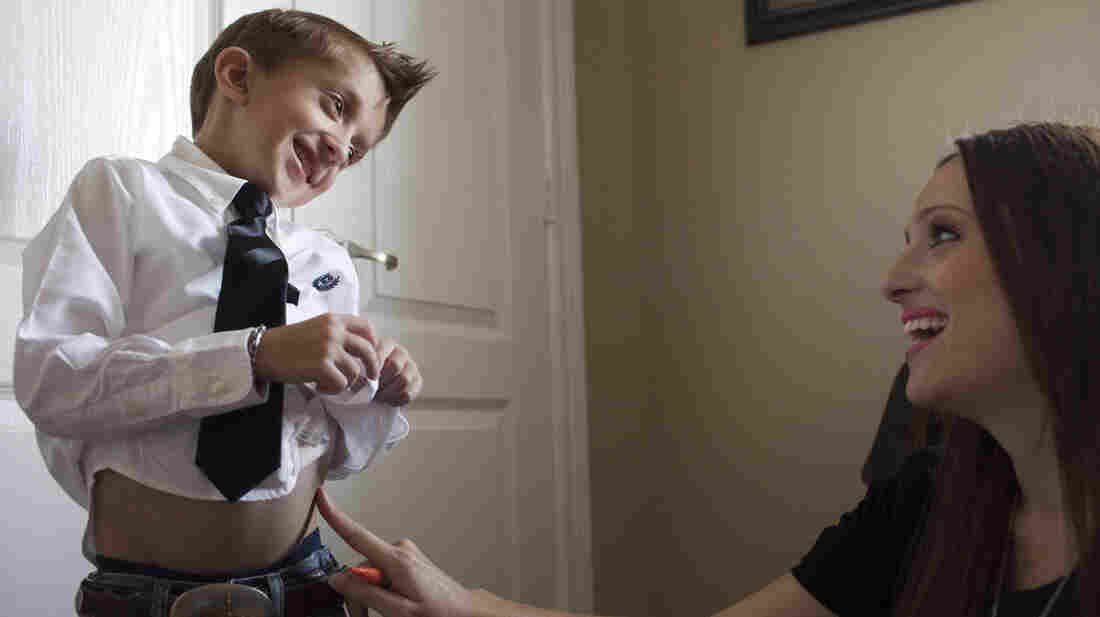 Sara Terry and her son, Christian, in Spring, Texas. After sequencing Christian's genome, doctors were able to diagnose him with a Noonan-like syndrome. Eric Kayne for NPR hide caption

Sara Terry's first clue that something was wrong with her son, Christian, came just three weeks after he was born.

"We went to check on him, just like any parents go and check on their kids just to make sure they're breathing," says Terry, 34, of Spring, Texas. "And we found him in his crib, and he wasn't breathing. He was blue."

She and her husband were horrified. They rushed Christian to the hospital and learned he had several medical problems.

That terrifying night was the beginning of a long, frustrating odyssey. For the next six years, Sara Terry and her husband went from doctor to doctor trying to figure out what was behind Christian's strange constellation of problems: developmental delay, low muscle tone, sleep apnea and a heart murmur, among others.

The Terrys got every test every specialist could think of, but no one could answer the big question: What's wrong with Christian?

The Terrys finally ended up at the Baylor College of Medicine in Houston. A doctor there told them about something they'd never heard of: whole genome sequencing, which can test for every genetic syndrome that's known.

The Terrys agreed, and sent off their son's sample for testing — and waited.

Until recently, genetic tests only scanned small parts of someone's DNA, such as the parts carrying genes that can cause Huntington's or Alzheimer's or breast cancer.

"For those of us in the field, it is sort of a holy grail," says Arthur Beaudet, who chairs Baylor's genetics department. "We now have the ability to get very complete genetic information about individuals and interpret in the context of whatever problems they may have."

It wasn't all that long ago that it took hundreds of scientists years, and billions of dollars, to do this on just one genome.

But now, a few lab techs using high-speed sequencers can unravel anyone's DNA for just thousands of dollars, in weeks.

"To me, it's a spectacular advance," Beaudet says. "It changes everything, in the sense that we really begin to understand at an individual patient level exactly which gene is altered, and we can begin to think about ways to intervene."

So far, doctors are using sequencing mostly on two kinds of patients. The first are patients like Christian, with mysterious illnesses no one can seem to sort out.

"Any patient who has one of these rare diseases will tell you about the misery and the agony of this process, which is going from doctor to doctor, undergoing test after test after test, and getting equivocal answers to what's wrong with them or their child," says Leslie Biesecker of the National Human Genome Research Institute.

"This process can take months or years of a patient's life," says Biesecker. "And sometimes at the end of that odyssey you still don't have an answer. And it's a miserable process for patients to go through."

The second big group of patients getting sequenced includes cancer patients like Jamie Zweig. He's been fighting esophageal cancer for more than two years. Doctors at the Mayo Clinic sequenced his cancer to see if they could target treatment at the precise genetic mutations that caused his tumors.

They discovered that his cancer was vulnerable to a drug normally used to treat breast cancer.

"I feel much more on the track of beating this disease than being subject to the disease," Zweig says.

This is all very new, but it's becoming more and more common.

"Physicians now want to use sequence in the same way that they had used X-rays, MRI and CAT scan," says Jonathan Rothberg of Ion Torrent, which makes high-speed sequencers. "They want to use it as a normal part of the practice of treating cancer patients."

But there are lots of issues that need to be worked out before whole genome sequencing starts being used a lot, many experts say.

"We'll have to worry when you're sequencing a kid with an unknown syndrome and also checking the parents to see what he inherited from which of his parents," says Hank Greely, a bioethicist at Stanford University.

"That can be really medically useful, but we have to worry about: How accurate is the sequencing? How good is our interpretation? And how well are we conveying an accurate message to the patients?"

It's far from clear how often it will yield truly definitive, useful information. The danger is scary, but vague results will send patients down long, frightening dead ends filled with lots of tests and useless treatments that themselves could be dangerous and expensive.

Another fear: What if doctors stumble across something they weren't even looking for? After all, when a child is sequenced, it reveals a lot about their parents' genes, too.

So another question is: Should we even be looking for other stuff?

"A huge question in front of the genetics community right now is: If you do sequencing for one purpose, what is your obligation to look and to report on findings elsewhere in the genome?" says Robert Green, an associate professor of medicine at Harvard Medical School.

While the experts try to sort all that out, whole genome sequencing is helping to save lives, and providing more patients with answers they've been seeking — often for years.

Terry remembers the day doctors called to tell her the results of sequencing Christian.

"I was just kind of speechless. And I just kind of sat there for a little while thinking, 'Am I dreaming? Like, did I really just get a phone call?' We were just so happy to have a diagnosis and to know that they'd found what we had been searching for all these years," Terry says.

Doctors discovered Christian has something rare called a Noonan syndrome-like condition. Christian is now 6 years old. There's no miracle drug that will cure him.

But his mother says the diagnosis helps in lots of ways. Doctors know they can safely give him shots to help him grow better. The Terrys know he won't suddenly develop a fatal complication. And they now know that it's not something that's likely to affect any kids they might have in the future.

"This has made such a huge difference in our lives," she says. "I can't even tell you. We are just so relieved."

This is the third story in the "$1,000 Genome" series. Our online survey will close after the final story in the series airs on Oct. 5.