Accessibility links
When Doctors Tell Patients They Shouldn't Drive : Shots - Health News After Canadian doctors warned patients with medical conditions that could impair driving about the risks, there was a 45 percent drop in the annual rate of accidents for the group. But the patients also were seen more often for depression afterward and were less likely to return for care to the doctors who warned them. 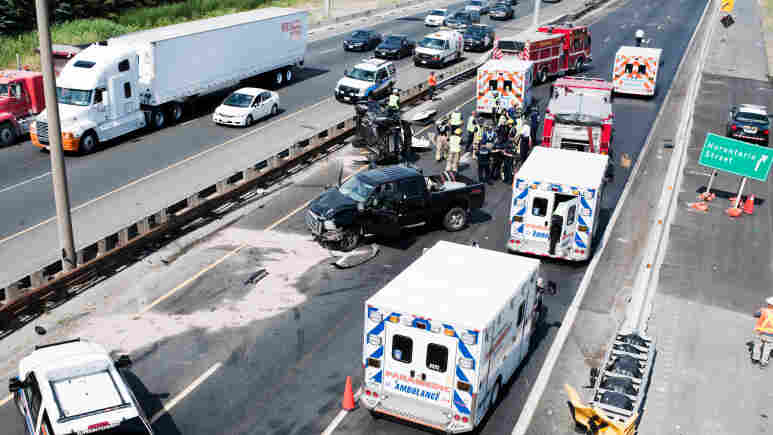 Fire department personnel, police officers and paramedics at the scene of a fatal collision on Highway 401 in Mississauga, Ontario, in July 2011. Stacey Newman/iStockphoto.com hide caption 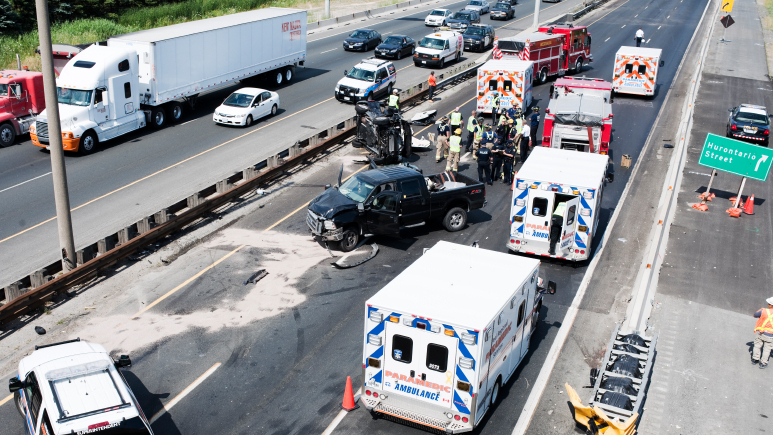 Fire department personnel, police officers and paramedics at the scene of a fatal collision on Highway 401 in Mississauga, Ontario, in July 2011.

In Ontario, doctors get paid $36.25 each time they warn patients who might be unfit to drive and report them to the provincial transportation department.

Which conditions might pose hazards behind the wheel? There's a checklist on the Ontario report form that offers some of the more common conditions, including alcohol dependence, seizures, dementia and uncontrolled narcolepsy.

So does telling people they're not fit to drive help prevent accidents? It looks plausible, according to results of a study in the latest New England Journal of Medicine.

Researchers at Sunnybrook Health Sciences Centre found a 45 percent drop in the annual rate of accidents for patients after doctors warned them. The accident rate fell to about 2.73 accidents annually per 1,000 patients from 4.76 annually during a three-year period before the warnings.

There was a downside. The researchers found a significant uptick in treatment for depression in emergency rooms for patients after the warnings. Patients' visits to the doctors who warned them also fell off, suggesting the warning hurt the therapeutic relationship.

The researchers were able to match medical and driving records and follow the patients for years. But the researchers didn't arrange for doctors to randomly give some people warnings and others none. That meant the researchers can't absolutely prove the warnings were responsible for the drop in accidents.

Still, the study concludes that "the reduction in risk was immediate, substantial, and sustained...." And the observed decline in accidents was hard to explain otherwise. "Together, these data suggest that warning patients who are medically unfit to drive may reduce the risk of road crashes," they wrote.

Payment of doctors to warn and report unfit drivers increases the likelihood that will happen. But the study suggests the warnings were linked to a real increase in depression and harm to the doctor–patient relationship, the researchers concluded, while still not reducing driving risks to the same level as the population at large.