Accessibility links
Nail Biting: Mental Disorder Or Just A Bad Habit? : Shots - Health News The next version of the American Psychiatric Association's Diagnostic and Statistical Manual of Mental Disorders proposes to lump nail biters and other pathological groomers with people who have obsessive compulsive disorder. But some psychiatrists see nail biting as a much more benign habit. 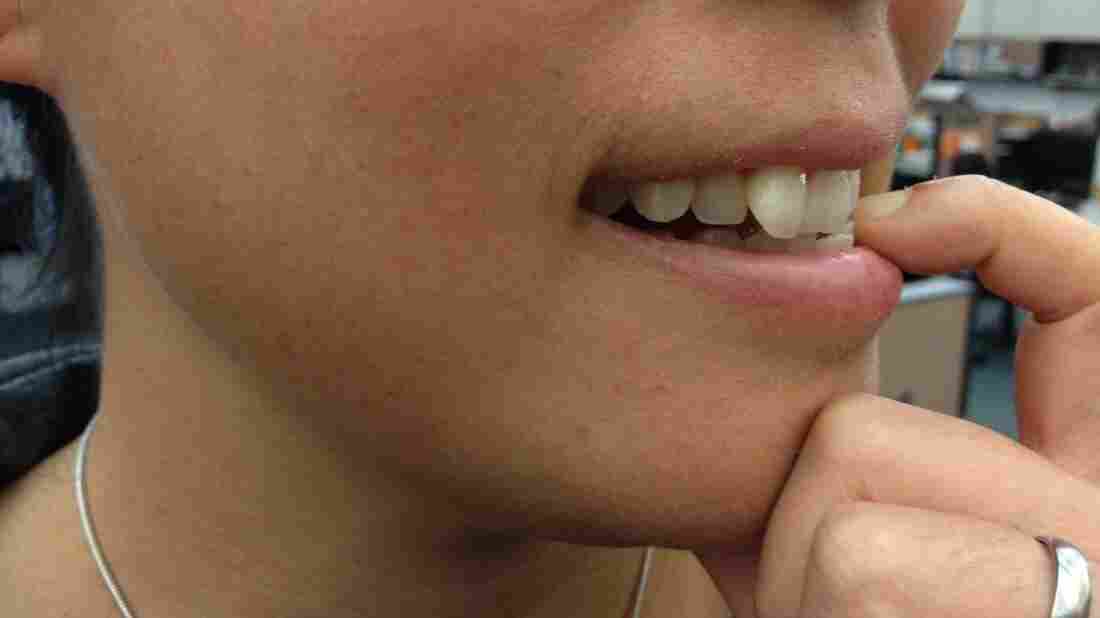 Pathological nail biting may be a form of grooming on steroids, but it also makes the biter feel good, unlike fear-driven OCD. Andrea Kissack for KQED hide caption 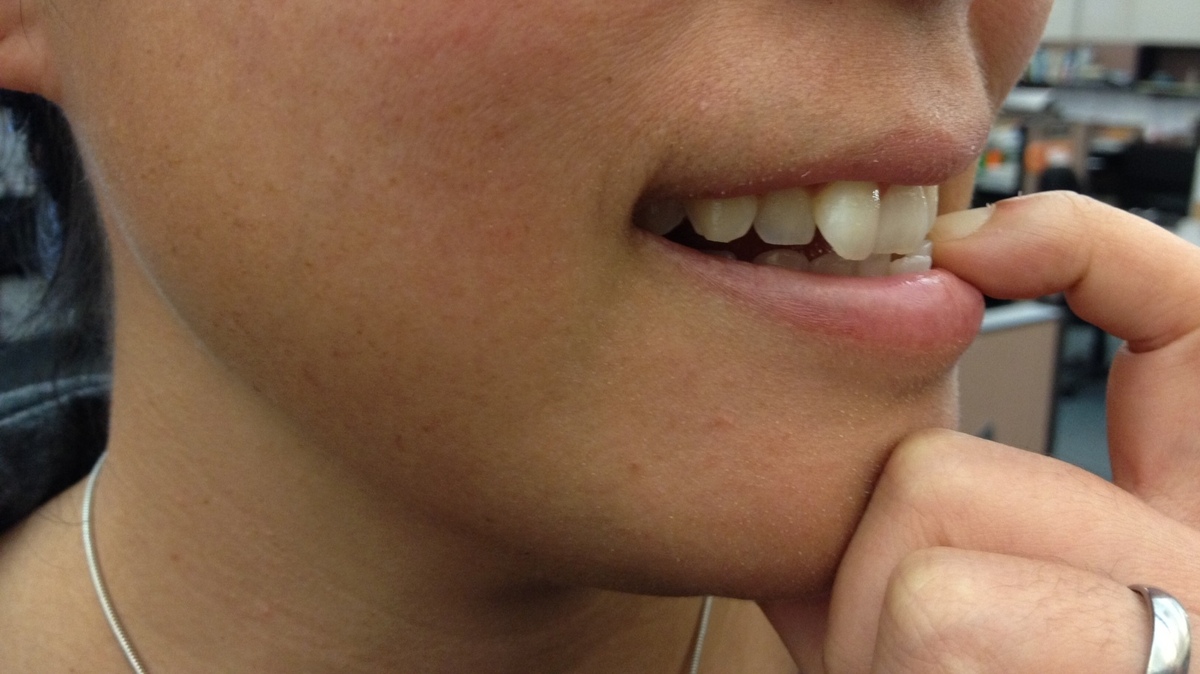 Pathological nail biting may be a form of grooming on steroids, but it also makes the biter feel good, unlike fear-driven OCD.

Do you bite your nails? For 30 years, I did. We nail biters can be "pathological groomers" — people for whom normal grooming behaviors, like skin picking or hair pulling, have become virtually uncontrollable.

But psychiatry is changing the way it thinks about pathological grooming, and these changes will be reflected in the American Psychiatric Association's DSM, short for Diagnostic and Statistical Manual of Mental Disorders. A new version is coming out early next year, and it puts pathological grooming in the same category as another disorder you've probably heard of: obsessive compulsive disorder, or OCD.

This rethinking gives pathological groomers some new ways to think about those behaviors.

I can tell you the exact moment I became a nail biter. I was 6 years old, watching my mom get dressed for work. She paused to mull something over, chewing on a nail. My reaction: "How cool! How grown-up! I think I'll try it."

I never stopped. It was embarrassing — like wearing your neuroses on your sleeve. At parties, I learned to wrap my fingers all the way around my wine glass, so that my nails faced my chest. I hated filling out forms in public places.

Recently, something happened that made me finally quit biting my nails. I'll get to that in a bit. But I was feeling quite pleased with myself when I showed them to Carol Mathews, a psychiatrist at the University of California, San Francisco. "Your cuticles are pushed back. It's not bad. Looks like you're a recovered nail biter is what I'd say," she pointed out.

"They are behaviors that stem from normal grooming — the kind of thing that most animals do and is evolutionarily adaptive, right?" says Mathews.

But in pathological groomers, those behaviors go haywire. Instead of being triggered by, say, a hangnail, the pathological nail biter is triggered by driving, reading or feeling stressed out. "After a while, the behavior becomes untriggered," says Mathews. "It becomes just an automatic behavior that has no relationship to external stimuli at all."

Until recently, the DSM treated pathological grooming a bit like an afterthought and put it in a catch-all category called "not otherwise classified." But the new DSM proposes to lump together pathological groomers and those with mental disorders like OCD. That includes people who wash their hands compulsively or have to line up their shoes a certain way.

These behaviors have a lot in common. In both cases, it's taking a behavior that's normal and healthy and putting it into overdrive, doing it to the point of being excessive. But in at least one way, OCD and pathological grooming are also very different.

"In OCD, the compulsion is really unwanted," says Mathews. People with OCD don't want to be washing their hands or checking the stove over and over again. There is no fun in it. There's fear — fear that if they don't do something, something else that's very bad will happen to them.

But from her pathological grooming patients, Mathews hears a very different story: They enjoy it. "It's rewarding. It feels good. When you get the right nail, it feels good. It's kind of a funny sense of reward, but it's a reward," she says.

I can relate to that. And in my household, I'm not the only one. My daughter Cora is 3, and she's why I decided to quit. I didn't want Cora to learn to bite from me, the same way I learned from my mom. So for three months, I wore acrylic fingernails and spent many long hours at the manicurist maintaining them.

And it worked. I lost the urge. But apparently, it was too late.

"I don't want to put my fingers in my mouth. I just [do] it even though I don't want to," Cora explained to me. But was she just mimicking me, or was there something else going on — something deep and strong enough to make nail biters out of at least four generations of women in my family, including my grandmother?

Francis Lee and his colleagues at Weill Cornell Medical College in New York found that mice with a certain mutation obsessively groomed themselves.

That's where Francis Lee, a psychiatrist and neuroscientist at Weill Cornell Medical College in New York, comes in. A few years ago, a colleague came to Lee with a mystery: A mouse — bred with a specific gene mutation — was behaving very oddly. "I was dumbstruck," recalls Lee. "It was just repetitively moving its front paws over its eyes and ears," — a behavior he instantly recognized from studying people.

In these mice, the genome is destiny. Every mouse that has this particular mutation — even if it's separated from its mother early on — eventually will become a pathological groomer. And the grooming isn't all. Lee says these are some of the most anxious mice he's ever seen. He even said to his colleague at the time, "That is one crazy mouse."

People, of course, are a lot more complicated. There are some genetic mutations that seem to crop up in people with OCD and in people who groom pathologically. But just because you have the mutation doesn't mean you get the behavior.

In fact, with OCD, it's more likely you won't, says Mathews. "As genetically determined as OCD is, the risk to a family member for someone who has OCD is only 20 percent. So it's 80 percent chance of not getting it," she says.

Which brings me back to my own crazy mouse.

As a parent, there are ways I could lower the chances that Cora will grow into a biter. When Mathews works with young kids, she does things like put Band-Aids on their fingers to help them notice when they're biting or pulling. Then she sets up reward systems to try to steer them away from the behavior.

I'd already started to do a clumsier version of this, gently batting Cora's hand away from her mouth whenever she started to bite. But it had come at a price, one I wasn't entirely comfortable with. I had to decide what was worse: making Cora feel bad about herself for something she couldn't help, or just letting her grow into a nail biter, which, while certainly not the worst thing in the world, had given me some grief.

Tracy Foose, a psychiatrist in San Francisco who specializes in anxiety disorders, seemed to offer a third option. She bites her nails, and, like me, she has a 3-year-old daughter. Foose has a whole different take on it — probably a much better one. Nail biting is just part of who she is. She's even proud of it. "You know, my mom bites her nails. She was an artist. So, I think I associate it with being cool and being older and working on something important," she says.

During her residency, Foose met a patient at the ER one night. "A lovely, middle-aged mother of several kids who came in and looked scared out of her wits," she recalls. This woman had become fixated on a perceived blemish on her face. "She had picked at her cheek to a level where she was bleeding profusely," says Foose.

It was dermatillomania, to be specific.

"She truly could not control herself, despite the pain that it was causing, despite the disfigurement. And nail biting sort of forever fell off my radar," says Foose.

Nail biting is not life threatening. On the scale of human failings, it barely lifts the needle. It's not to say Cora wouldn't be better off not biting her nails. But, says Foose, there may be a better way to talk about it. Just as Foose had removed the stigma and guilt for herself, maybe I could do that for my daughter.

"You can go to the place of giving kids information. Like, 'Oh, I see you biting your nails. Mommy bites her nails, too. You know why we shouldn't bite our nails? Because there are germs that live under our nails,' " explains Foose.

A way that frames it, in other words, as a choice. One that's hers to make — even if it takes having her own kids one day to make it.