Accessibility links
Will Low-Cost Genome Sequencing Open 'Pandora's Box'? : Shots - Health News The prospect of lots of people plunging into their genomes makes many doctors very nervous. Some argue that for most people, genome sequencing could reveal false positives and be a big waste of time and money. 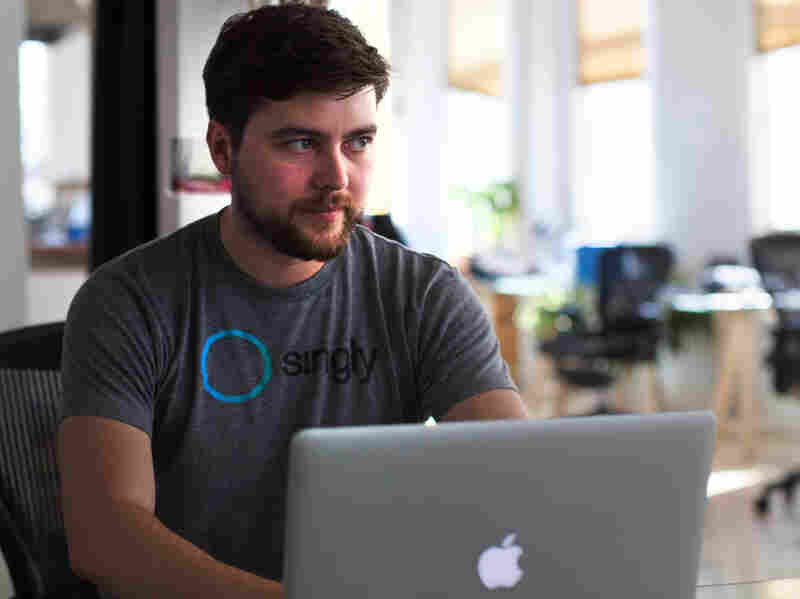 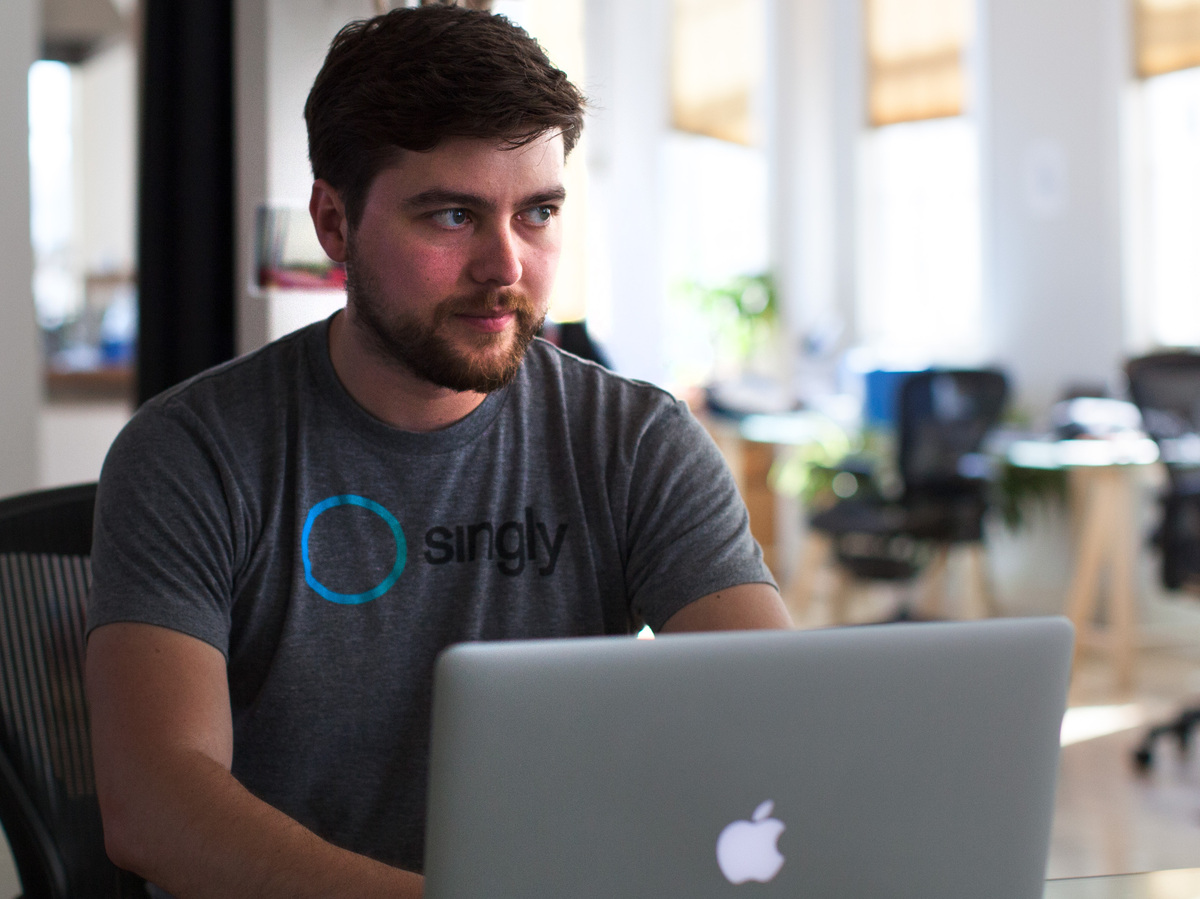 Beau Gunderson's $999 genome test showed that he didn't inherit the gene for Alzheimer's, but he carries genes found in Olympic sprinters.

Beau Gunderson's fascinated by what he might learn from his DNA.

"I'm curious about what makes me tick, essentially," says Gunderson, 29, who writes code for a Silicon Valley startup.

So Gunderson has signed up for every genetic test he's been able to afford. And he can't wait for the price of getting his entire genetic code — his genome — to drop to about $1,000, as many are predicting is imminent.

"Yeah, if the price does drop — to a thousand bucks for example — I might pay that. That's a good personal price point for me," Gunderson said.

So-called whole genome sequencing is already available for between about $4,000 and $10,000.

"The early adopters that are getting this done now are those who have this incredible curiosity about their genetic makeup, about their potential genetic destiny," said Jay Flatley, who heads Illumina Inc., of San Diego.

Illumina even recently started offering an iPad app that people can use to learn more about whole genome sequencing and their own genomes. In September, the company announced a new service that could deliver a genome in two weeks.

So far sequencing is being used primarily only to diagnose mysterious medical conditions and help treat cancer patients, and by scientists, biotech executives and other people who can afford the out-of-pocket cost.

But the price is plummeting, and many are predicting the $1,000 genome is coming soon. And when that happens sequencing could become much more common.

"I think it's going to be just kind of crazy not to have your genetics known," says Brian Naughton of 23& Me, another genetic testing company. "It would be kind of like not knowing if you are allergic to a drug or not knowing your family history of a disease."

But all it takes to get your genome sequenced is a blood sample, and in weeks you get the results. 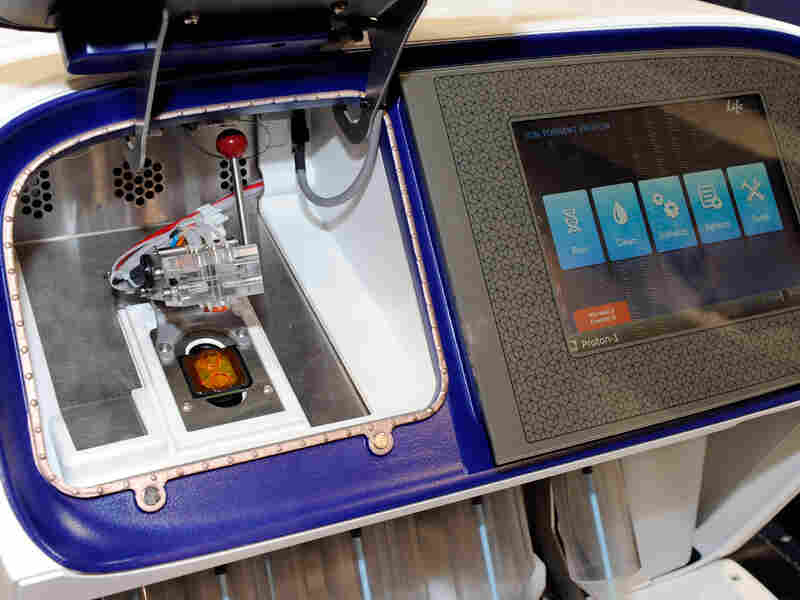 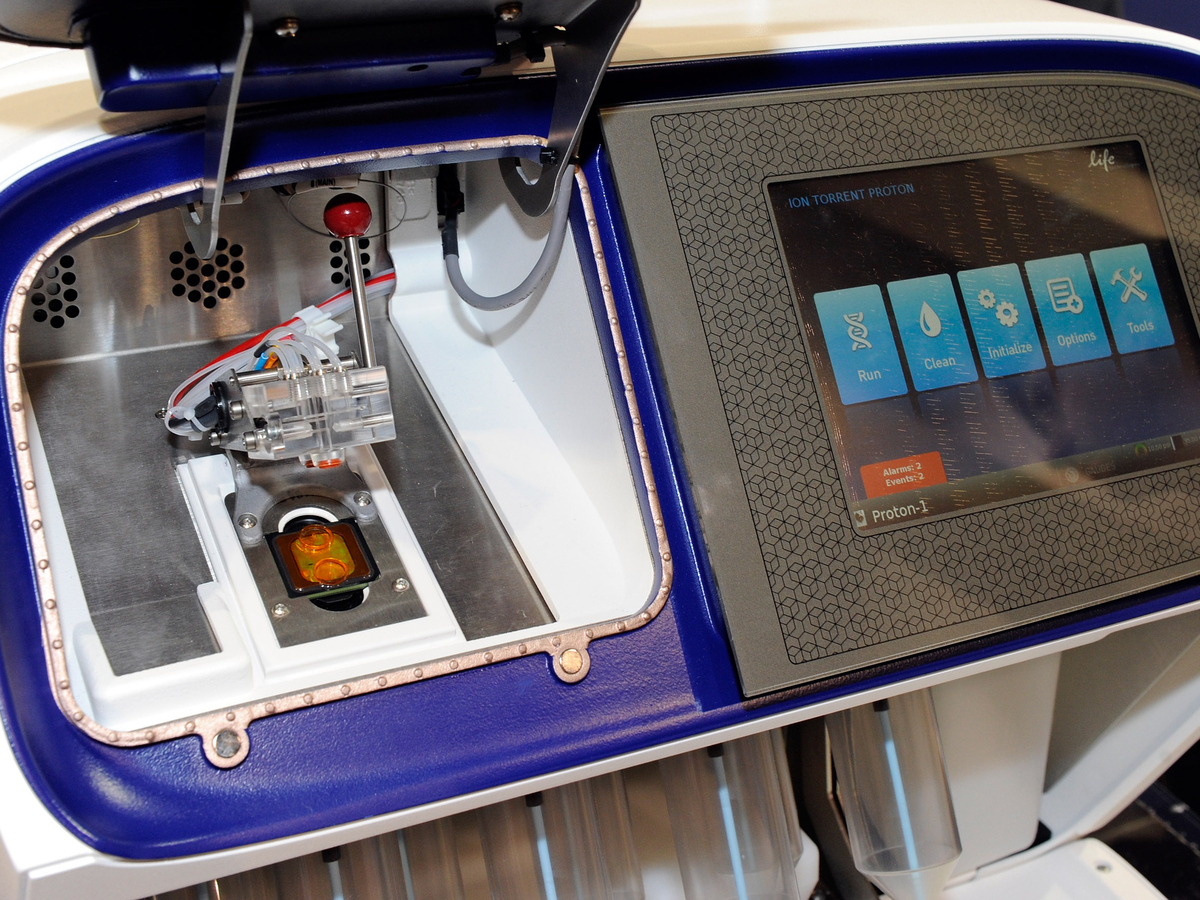 The Proton Semiconductor Sequencer from Ion Torrent Systems Inc. is a new DNA sequencing machine designed to sequence the entire human genome in about eight hours for $1,000.

This summer Gunderson jumped at a special deal from 23&Me. For $999, he could be one of the first 100 customers to get a big chunk of his genetic code sequenced. It's the part called the exome, which contains all the known genes.

Most of the information would be basically gobbledygook to most people — even most doctors. But Gunderson has learned he didn't inherit an Alzheimer's gene. And he found out a cool reason why — maybe — he made the track team: He has genes found in a lot of Olympic sprinters.

Gunderson still has lots of questions. He wonders if he is carrying any genes that could make him sick.

And he has attention deficit hyperactivity disorder. So he wonders: Could his genes give him any clues about that?

"It might be interesting if there's research that says ... something about the efficacy of Adderall versus another drug that's prescribed for [ADHD]," he says.

He's also curious about other stuff such as why he has trouble sleeping and why he's so particular about food.

While all this might sound appealing, the prospect of lots of people like Gunderson plunging into their genomes makes many people very nervous.

The first big question: Is this cheap, new sequencing even accurate? Mistakes could have horrible implications. Take a breast cancer gene mutation.

"You might be told you have a mutation when you don't. And it's not completely unknown for women who find out they have a mutation in one of these genes to go have a mastectomy so they won't get cancer," says Liz Mansfield of the Food and Drug Administration.

And even when it's right, it could open up a Pandora's box.

"You know, it's a seductive thought to think, well, you know, we might as well know about stuff," said James Evans of the University of North Carolina, Chapel Hill, and the American College of Medical Genetics.

But for most people, sequencing will be just a big waste of time and money, he said.

"We don't just get MRIs on everybody who comes to the doctor's office. Not only would that be ridiculously expensive and uninformative," says Evans, "it could also lead to all kinds of false positives that would be highly problematic for those people."

And sequencing could easily end up stumbling across some terrifying things.

"There are also people walking around out there who carry mutations that create an extraordinarily high probability that they will develop a horrendous, untreatable, unpreventable disease by age 50, 60 years old," he says. "That isn't necessarily information that everybody wants."

It's not just that this might scare people — it could cause really serious, concrete problems in their lives. Getting sequenced could subject people to genetic discrimination for things like life and disability insurance.

There are even more futuristic concerns.

"Individuals who leave samples of their DNA lying around — as we all do every day on straws and napkins and glasses and linen — could have those samples taken and sequenced by third parties," said Mark Rothstein, a bioethicist at the University of Louisville.

It's not totally crazy to think someone, someday could use a person's genetic blueprint to manufacture their DNA and then plant it at a crime scene, for example.

Proponents dismiss most of these fears. They argue that the potential benefits of sequencing, both to individuals and society, far outweigh such theoretical risks.

"For the community of medical care practitioners to decide that it's inappropriate to burden people with this knowledge, it's excessively paternalistic," says Richard Gibbs of the Baylor College of Medicine.

Others argue that people just have a right to have their genome.

"A lot of people just feel like it's their information. They own it," says 23&Me's Naughton. "They want to know."

Gunderson agrees. He's not worried about privacy or discrimination. He even posted all his results so far online and plans to do the same with his full genome.

"A big reason in my mind is like in some tiny way moving science forward by allowing people access to data that they didn't previously have," he said.

As Gunderson waits for the price to drop, geneticists are rushing to figure out how make sure sequencing does more good than harm.