Accessibility links
The Peanut Butter Cure Moves From Hospital To Snack Room : Shots - Health News For over a decade, peanut butter paste supplements like Plumpy'Nut have saved children around the world from malnutrition. Now health officials want to use the packets not just to save starving kids, but to keep them healthy in the first place. But will it work? 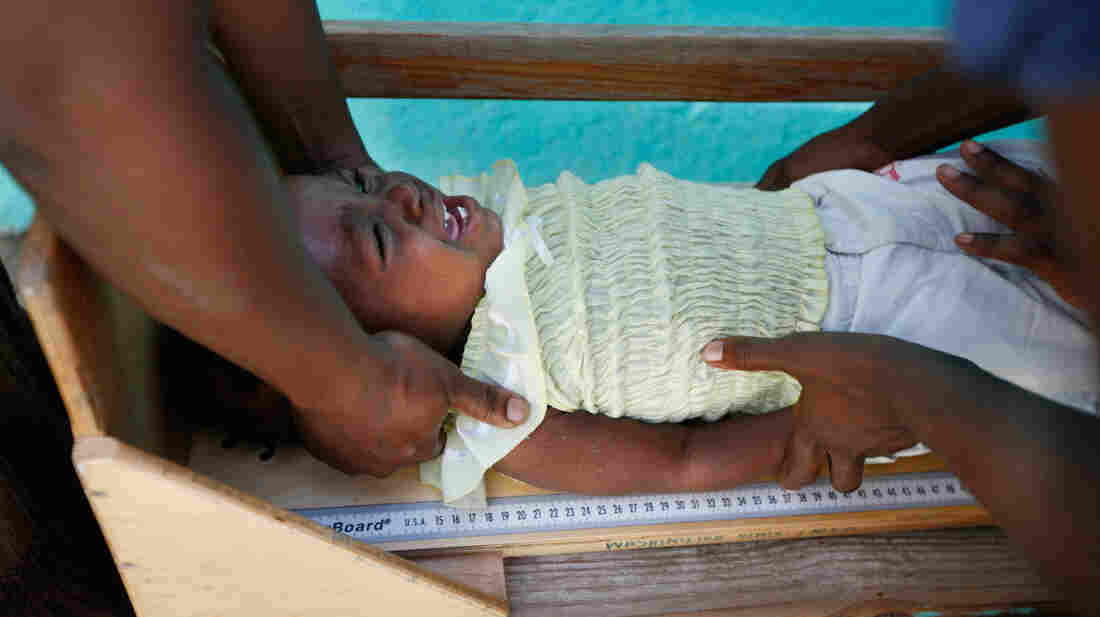 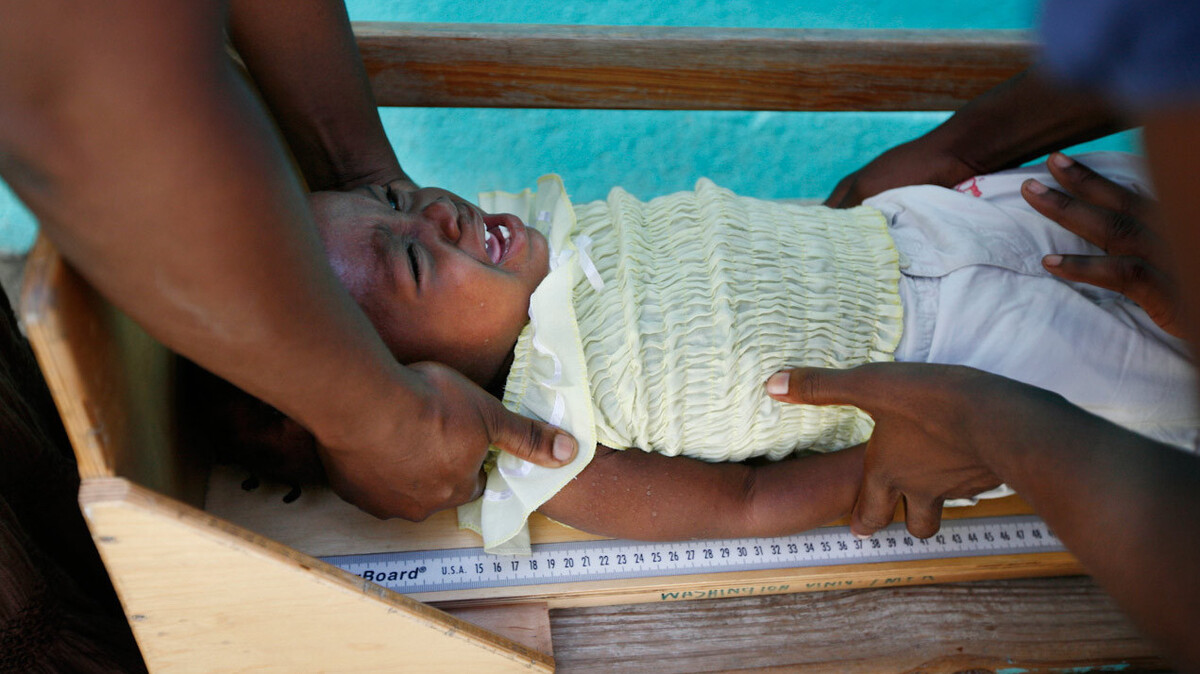 Renande Raphael, aged 16 months, is measured to check whether she is growing normally. As part of a new trial, she's receiving an extra daily snack of enriched peanut butter.

Just over a decade ago, a French doctor invented a treatment for severely malnourished children that had a revolutionary, life-saving impact.

The product goes by different names in different parts of the world, such as Plumpy'Nut, Nourimanba and Chiponde. It's basically peanut butter with some added ingredients: dried milk, oil, sugar, and essential minerals and vitamins.

It's been so successful that some public health officials now are pushing to expand its use. It wouldn't just be a treatment to save a life, but a snack to keep kids healthy in the first place.

There's one catch: The proponents of this strategy still have to show that it really works.

And that's why, in a clinic in the city of Cap-Haitien, on the northern coast of Haiti, 16-month-old Renande Raphael is getting laid out flat in a wooden box so that nurses can measure how much she's grown.

After getting measured, Renande will get something else: a pile of little foil-wrapped snacks. Enough to eat one every day for a month. She's been getting them for the past six months.

Sherlie Jean-Louis, a nurse with a quiet voice and a huge smile who's helping to run this trial program, explains that the packages contain about four teaspoons' worth of peanut paste that's been fortified with lots of essential nutrients, such as zinc, iodine, iron and lots of vitamins.

It's a smaller version of the more famous peanut butter product that's used to treat children who are suffering from severe malnutrition.

But Sherlie Jean-Louis explains that the children who come here have been doing just fine, probably because they've been breast-feeding.

Still, they're at risk for malnutrition. This is one of the poorest neighborhoods in Cap-Haitien. And the children now are vulnerable. They're getting a little older and shifting to other foods, often inferior ones, nutritionally speaking.

Renande Raphael's mother, Guerlandie Joseph, says that the nurses have been giving her advice about what food to buy for her child. They've been urging her to get milk, eggs and vegetables.

But it's hard to follow that advice, she says. Those foods are expensive, and she doesn't have much money. So they mostly eat rice, beans and corn.

Lora Iannotti, a specialist in international nutrition at Washington University in St. Louis, helped set up this trial program in Cap-Haitien. 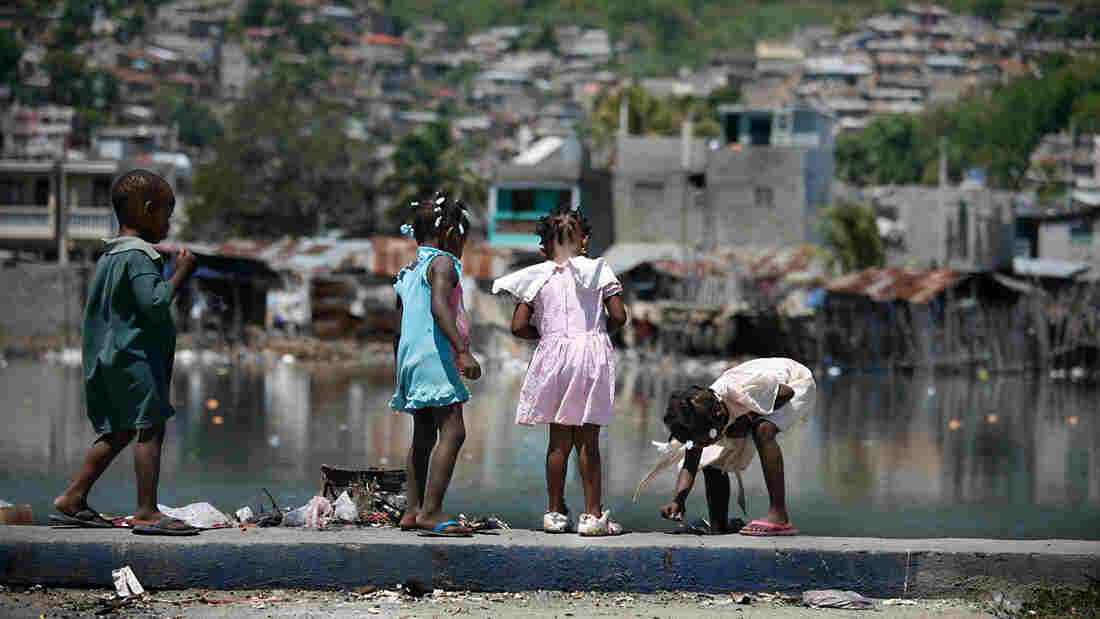 Many Haitian children suffer from "stunting" due to inadequate nutrition. Health experts now are trying to prevent this with snacks made from peanut butter, fortified with vitamins and minerals. Alex E. Proimos/via flickr hide caption 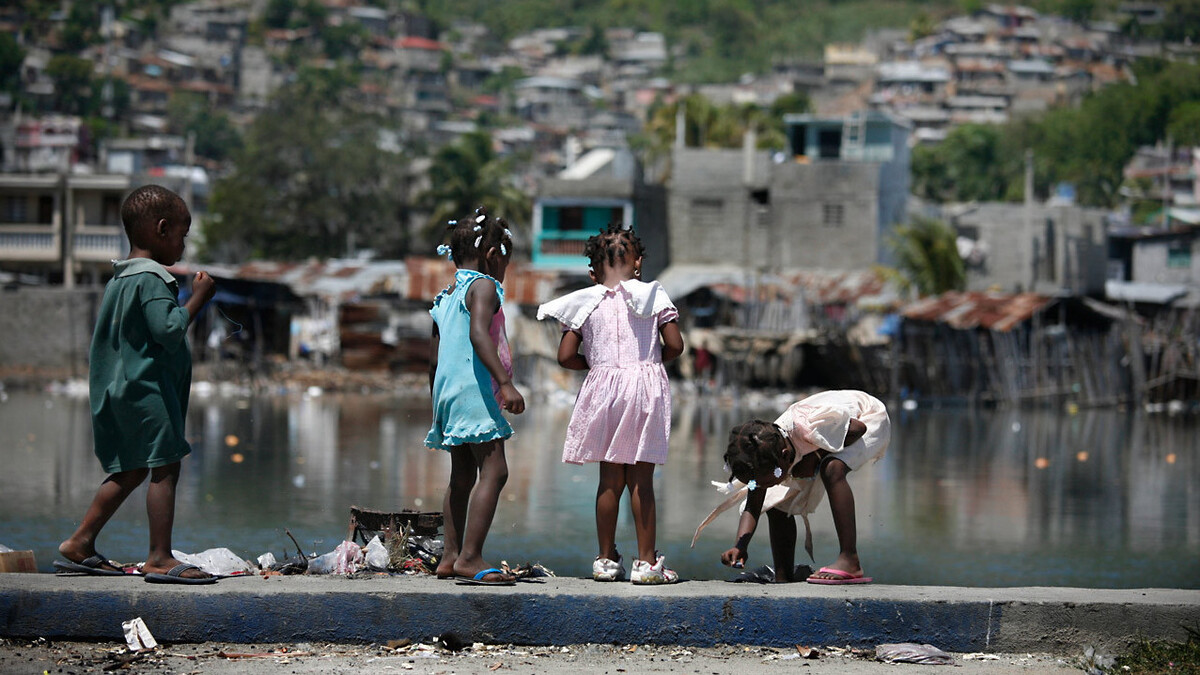 Many Haitian children suffer from "stunting" due to inadequate nutrition. Health experts now are trying to prevent this with snacks made from peanut butter, fortified with vitamins and minerals.

This is "a critical period" for children, she says, because many of the effects of malnutrition at this young age — from 6 to 18 months — are irreversible. "If a child is stunted, meaning that they lose height during that period, they never recover the height that was lost," she says. There can also be permanent effects on the brain.

Twenty percent of children in Haiti suffer stunting, Iannotti says. In Guatemala and some countries in Africa, it's about 40 percent.

Iannotti is monitoring the children in this trial program in Cap-Haitien, comparing them to a similar group of children who aren't getting enriched peanut butter — to see whether this daily snack reduces rates of stunting.

If her data show that it has a positive impact on health and growth, she says, "then the idea is, we move more into the rural areas of Haiti, where malnutrition is a bigger problem. And then, ideally, we move toward national coverage."

Similar experiments are under way in several other countries as well. They could be the first steps toward turning enriched peanut butter from emergency treatments into routine supersnacks.

Some experts, though, are raising flags of caution.

Mark Manary, who is also at Washington University but in the med school, has been a big booster of using enriched peanut butter for treatment of severe malnutrition. He's been disappointed by the results of the trial programs so far that have attempted to prevent malnutrition.

"Unfortunately, they have not worked very well," he says. Nobody really knows why the approach hasn't worked better.

Others in public health complain that the peanut butter packages are being pushed, in part, by private companies that make them. These critics worry that glitzy, foil-wrapped packets could distract people from local, low-tech nourishment, or from breast-feeding.

In an ideal world, we wouldn't rely on packages of enriched peanut butter, Iannotti points out. We'd be helping parents get good food nearby: non-packaged food like eggs, milk and meat.

But as Guerlandie Joseph, the mother in Cap-Haitien, explained, that just doesn't always happen. In this less-than-ideal world, Iannotti says, if little packages of fortified peanut paste can help nourish children through their most vulnerable time of life, the payoff would be huge.