Accessibility links
A Lively Mind: Your Brain On Jane Austen : Shots - Health News Could modern cognitive theories explain character development in one of Jane Austen's most famous heroines: Pride and Prejudice's Elizabeth Bennett? Reading sessions inside an MRI scanner are shedding light on the question. 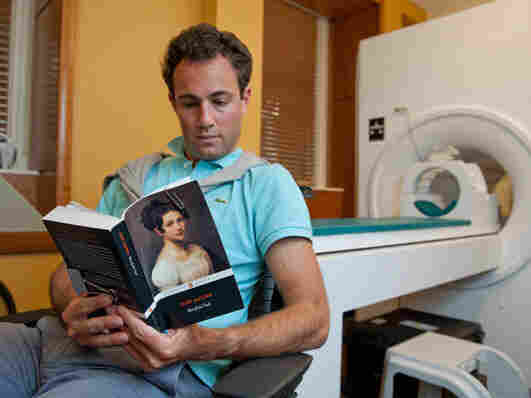 At a recent academic conference, Michigan State University professor Natalie Phillips stole a glance around the room. A speaker was talking but the audience was fidgety. Some people were conferring among themselves, or reading notes. One person had dozed off.

Phillips, who studies 18th- and 19th-century literature, says the distracted audience made something pop in her head. Distractability is a theme that runs through many novels of Jane Austen, whom Phillips admires. It occurred to Phillips that there was a paradox in her own life when it came to distractability.

"I love reading, and I am someone who can actually become so absorbed in a novel that I really think the house could possibly burn down around me and I wouldn't notice," she said. "And I'm simultaneously someone who loses their keys at least three times a day, and I often can't remember where in the world I parked my car."

For Phillips, Jane Austen became both a literary and a neuroscientific puzzle.

Could modern cognitive theories explain character development in one of Austen's most famous heroines — Pride and Prejudice's Elizabeth Bennett? Phillips thinks Bennett's distractability was key to Austen's characterization of her lively mind — and that Austen herself was drawing on the contemporary theories of cognition in her time.

She decided to conduct a study, looking at how reading affects the brain. She had volunteers lie still in a brain scanner and read Austen. Phillips sometimes instructed her volunteers to browse, as they might do at a bookstore. Other times, she asked them to delve deep, as a scholar might read a text while conducting a literary analysis.

Phillips said the experiment produced some surreal moments: "If you asked me on a top 10 list of things that I did not expect to find myself doing as an 18th-centuryist when I first started this study on the history of distraction, I would say lying on my back in an MRI scanner trying to figure out how to position paragraphs by Jane Austen so that you wouldn't have to turn your head while reading with a mirror."

Phillips and her collaborators scanned the brains of the volunteers using a functional magnetic resonance imaging machine. The scanner paints a rough picture of brain activity. A computer program simultaneously tracked readers' eye movements across the page, and researchers kept tabs on the volunteers' breathing and heart rate. At the end of the experiment, Phillips asked each volunteer to write a short essay based on the passages he or she read.

Neuroscientists warned Phillips she wouldn't see many brain differences between the casual reading and intense reading.

"Everyone told me to expect these really, really minute and subtle effects," she said, "because everyone was going to be doing the same thing, right? Reading Jane Austen. And they were just going to be doing it in two different ways."

Phillips said she mainly expected to see differences in parts of the brain that regulate attention because that was the main difference between casual and focused reading.

But in a neuroscientific plot twist, Phillips said preliminary results showed otherwise: "What's been taking us by surprise in our early data analysis is how much the whole brain — global activations across a number of different regions — seems to be transforming and shifting between the pleasure and the close reading."

Phillips found that close reading activated unexpected areas: parts of the brain that are involved in movement and touch. It was as though readers were physically placing themselves within the story as they analyzed it.

Phillips' research fits into an interdisciplinary new field sometimes dubbed "literary neuroscience." Other researchers are examining poetry and rhythm in the brain, how metaphors excite sensory regions of the brain, and the neurological shifts between reading a complex text like Marcel Proust compared with reading a newspaper — all in hopes of giving a more complete picture of human cognition.