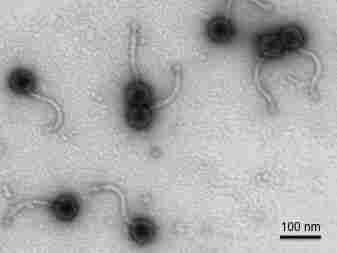 A tiny bacteriophage virus can cripple the bacteria that cause troublesome acne on teens' skin. Charles Bowman/University of Pittsburgh hide caption

Acne, the scourge of many an adolescent life, is getting harder to treat, but 80 percent of teenagers have some form of it.

Conventional treatment includes topical and oral antibiotics. Studies are now finding the bacteria that cause acne are increasingly resistant to antibiotic treatment. Alternatively, there are effective laser treatments. But these are costly and typically not covered by insurance.

Now, researchers are scrambling to come up with new treatments for acne. One promising possibility involves harnessing a harmless virus living on skin that naturally seeks out and kills the bacteria that cause pimples.

It's every teenager's nightmare: big, blistery red bumps on their faces.

"That's what people notice first about you, so no matter how great of a person you are, no matter how pretty your eyes are, how nice your smile is, people always notice the blemishes on your face," says Rohini Bagrodia, a really pretty 22-year-old with beautiful eyes, a great smile — and a history of battling acne.

In school, it meant avoiding the spotlight. "I would always shy away from those opportunities that would bring all the focus on me," Bagrodia says. She wouldn't take part in class discussions. She wouldn't raise her hand. And it's all because of a tiny bacteria that lives on the skin.

UCLA dermatologist Dr. Jenny Kim says many people don't realize it's bacteria that cause acne. "Some people say your face is dirty, you need to clean it more, scrub more, don't eat chocolate, things like that. But really, it's caused by bacteria and the oil inside the pore allows the bacteria to overpopulate," Kim says.

For most teenagers with mild acne, over-the-counter products containing peroxide or salicylic acid are enough to clear up the acne. But lots of teenagers end up in the doctor's office and getting antibiotics. This was the hardest thing for Bagrodia: No matter how much she followed doctors' orders, diligently cleaning her face and using antibiotic cream, nothing worked.

Dermatologist Elizabeth Martin is in private practice in Birmingham, Ala., and is a fellow with the American Academy of Dermatology. She says these bacteria, like many others, are mutating quickly and becoming resistant to antibiotics.

"Over the years, we have seen an increase in this antibiotic-resistant bacterium, both in the U.S. and also worldwide," Martin says. She points to studies that show a tripling of drug-resistant acne bacteria over the past few decades.

This means doctors can no longer rely on antibiotics alone. Most doctors now use a combination of low-dose antibiotics along with benzoyl peroxide, which also kills acne-causing bacteria.

As Martin says, benzoyl peroxide "works to decrease bacteria through a different mechanism than antibiotics, and it helps to prevent development of resistant bacteria. When we combine benzoyl peroxide along with an antibiotic, patients tend to have better clearance of their acne than when we use antibiotics alone."

Retinoids, vitamin A derivatives, can also be used early on to treat acne. Typically creams, they work by unclogging pores before they become large, inflamed bumps.

A stronger form, called Accutane, is used for severe acne. It's a highly effective pill, but it can cause serious side effects, including depression and birth defects. So the government regulates its use.

Intensely focused light and lasers can also help fight acne when other treatments fail. Kim is also a researcher at UCLA. In the room dedicated to light and laser therapy, Kim points out what appears to be a half-cylinder with stacks of oblong light bulbs.

"Patients with acne can go right under blue light, and they sit there for about 15, 20 minutes, and acne often improves after several treatments," Kim says.

It's not known exactly how light therapy works to fight acne, but Kim says studies indicate it destroys the bacteria. "Probably physically without giving it time to mutate; and the other thing — the light treatment can improve the inflammation that the bacteria causes in acne," she says.

But laser and light therapy doesn't work for everyone. It's expensive and typically not covered by insurance. So Kim and colleagues at the University of Pittsburgh are also looking into an entirely new way to fight acne: taking a harmless virus that lives on the skin and programming it to become a bacteria killer.

"The virus is going to go and kill the bacteria that causes acne. It's just going to break it apart and burst its membrane so there's no time for the bacteria to mutate," she says. It's sort of a surprise attack.

The approach is a promising way to get rid of acne without using antibiotics. If further lab studies prove successful, researchers will begin testing on people to see if viral therapy is both safe and effective in fighting acne.