Accessibility links
CDC: Meningitis Mold In Tainted Drug Can Incubate For Months : Shots - Health News The mold is so rare as a cause of human illness that nobody knows its incubation period. That makes it hard to predict when the outbreak will be over.

CDC: Meningitis Mold In Tainted Drug Can Incubate For Months

CDC: Meningitis Mold In Tainted Drug Can Incubate For Months 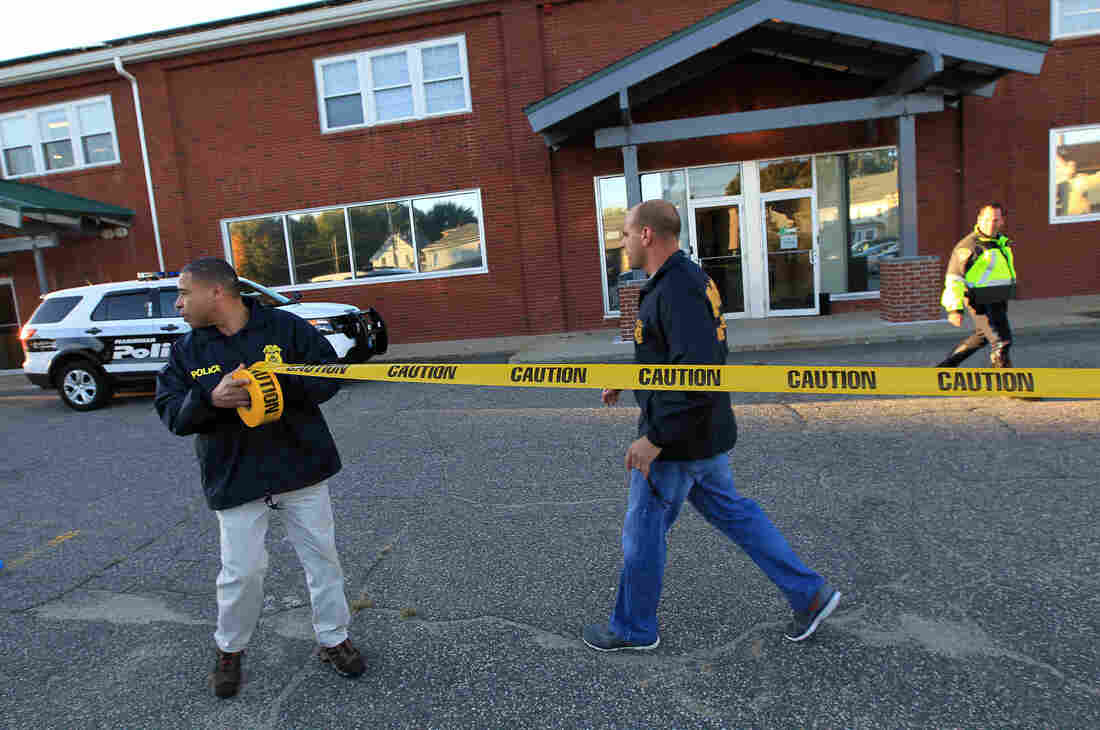 Federal agents investigate the offices of the New England Compounding Center in Framingham, Mass., on Tuesday. The company's steroid medication has been linked to a deadly meningitis outbreak. Barry Chin/AP hide caption

As the caseload of fungal meningitis linked to a tainted steroid drug climbs, experts are learning more about this human-made epidemic. The signs indicate that cases could still be emerging until Thanksgiving or beyond.

The latest count is 268 cases of meningitis and three patients with fungal joint infections, spread across 16 states from New Hampshire to Texas and Idaho to Florida. Twenty-one people have died.

The illness is caused by a fungus called Exserohilum rostratum, a black mold that usually attacks plants. It's so rare as a cause of human illness that nobody knows its incubation period.

So it's hard to predict when the outbreak will be over, even though presumably no patients received the contaminated steroid since the Massachusetts pharmacy that made it recalled three lots on Sept. 21.

"The incubation period is something that's been a big question," Dr. Tom Chiller of the Centers for Disease Control and Prevention told a Thursday evening session of the IDWeek meeting in San Diego.

"The majority [of cases] have incubation periods around one to four weeks, but we've clearly seen documented periods beyond that," he said.

Chiller told Shots that none has been beyond two months so far. That's based on 155 cases for which the CDC has firm dates for steroid injection and symptom onset. The incubation period is hard to calculate, though, because many patients had multiple injections of potentially contaminated methylpredisolone made by the New England Compounding Center.

Even more sobering, the meningitis incubation period was as long as five months in an eerily similar outbreak of mold-contaminated methylprednisolone in North Carolina back in 2002.

Dr. John Perfect of Duke University recalls that outbreak in an article published online by the Annals of Internal Medicine on Thursday.

"We learned, or thought we learned, several important lessons from the outbreak," Perfect writes.

One of them is that mixing preservative-free steroid drugs such as the one involved in both outbreaks "requires meticulous sterility to ensure lack of fungal contamination," he says. Anything less and fungi "grow aggressively" in a highly concentrated steroid solution.

But there are encouraging signs. For both the 2002 episode and the current one so far, the "attack rate" is apparently low. That is, few of those injected with the contaminated steroid get sick — for unknown reasons.

That's an inference from the fact that public health authorities estimate 14,000 people got the tainted injections since May 21. While no one can say how many people ultimately will get sick, at least it's not in the thousands so far.

"Early in the outbreak, we saw more advanced disease," he says. "Now, as we've reached out to all these patients, we're identifying people early and symptoms are very mild."

CDC officials say that 97 percent of the 14,000 people thought to have received the contaminated steroid have been reached and advised to watch for signs of infection.

Infectious disease experts are warning that patients who've had injections of medicine from New England Compounding should get a spinal tap as soon as they develop even a mild headache.

If their spinal fluid shows an increased level of white blood cells, indicating infection, patients should be started on an antifungal drug called voriconazole right away, a trio of infectious disease specialists say in an article published online Friday by the New England Journal of Medicine.

But they say nobody knows how long patients will need to be treated; at least three months is necessary, and maybe longer.

That's tough because voriconazole interacts with a slew of other drugs that many of the predominantly older patients who got the steroid injections are taking. It can also cause hallucinations in doses necessary to kill the fungus.

"We want high levels, but not so high where you have 80-year-old patients hallucinating, which is what's happening," Chiller says.

Another new article in the New England Journal lays out the details of the very first recognized case of fungal meningitis in this outbreak — a man in his 50s treated at Vanderbilt University Medical Center in Nashville.

It makes for grim reading. Three weeks after he had a spinal injection of methylprednisolone made by the Massachusetts pharmacy, he had worsening headaches and neck pain.

As doctors struggled to figure out what was wrong with him, his meningitis symptoms worsened, and he developed signs of stroke. On the 22nd day of his second hospitalization, his brain was so riddled with hemorrhages and dead tissue that there was no hope of recovery, and his family decided to discontinue life support.

Oddly, that man is the only case so far who was infected by a different fungus called Aspergillus. This week, federal officials found multiple unused vials of the New England Compounding Center's methylpredisolone containing Exserohilum, but none so far with Aspergillis.

It's just one of many mysteries that still surround this outbreak.

Meanwhile, the owners of the Massachusetts pharmacy agreed Friday to a request by state officials to extend their shutdown of a sister company called Ameridose until investigators are satisfied that no tainted drugs were being produced at that plant.