Accessibility links
President Embraces 'Obamacare'; What Would Romney Do? : Shots - Health News Some critics are puzzled by Mitt Romney's opposition to the Affordable Care Act because the law is a close cousin of the measure he signed while governor of Massachusetts. But others counter that the private sector is best left to make the changes imposed by President Obama's signature achievement. 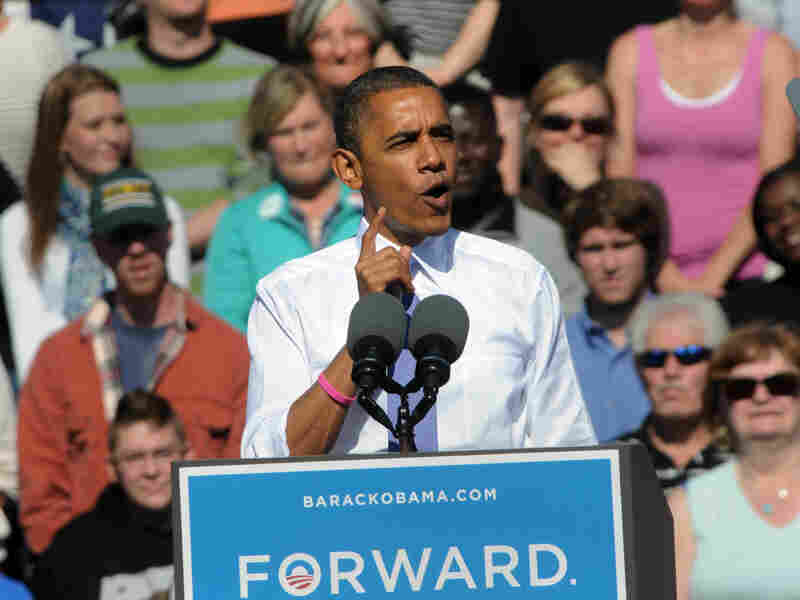 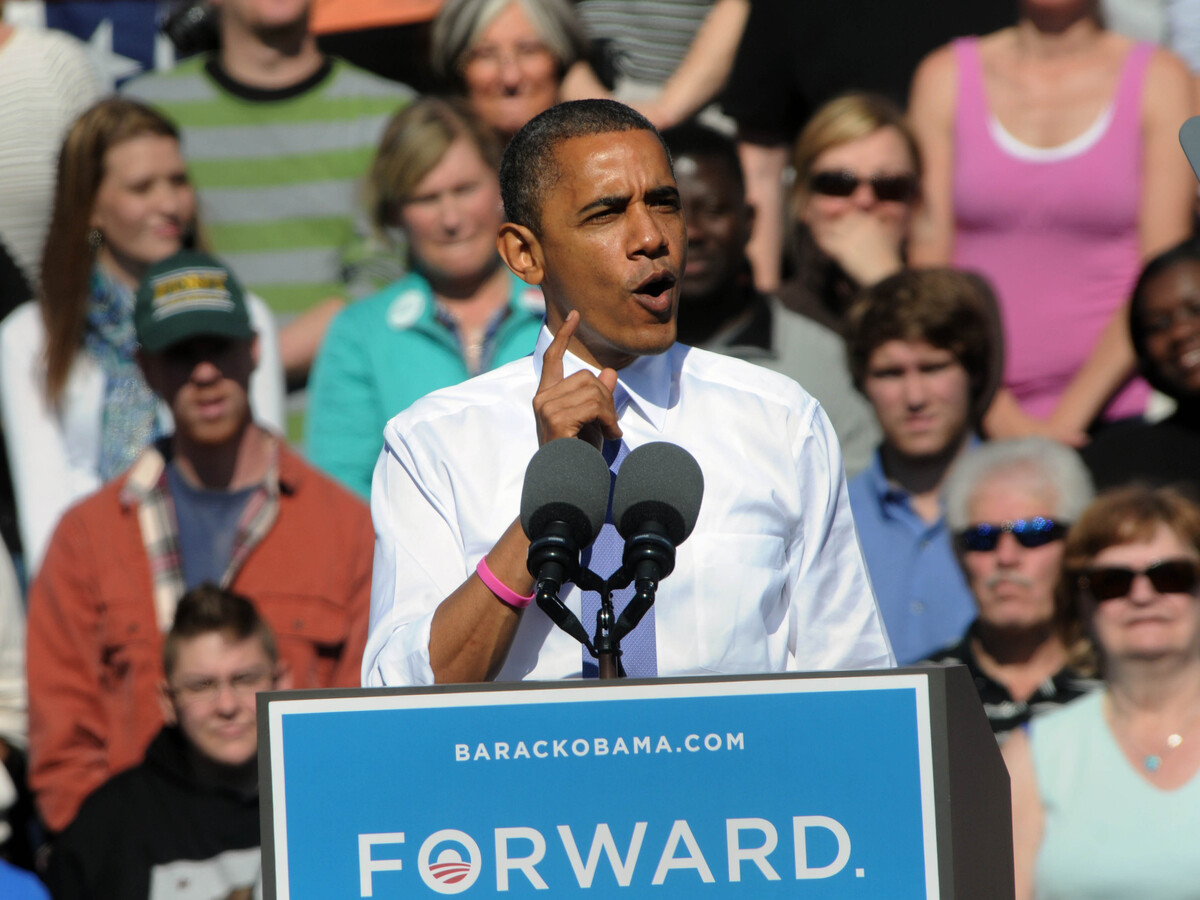 During a campaign speech at Veterans Memorial Park in Manchester, N.H., Oct. 18, President Obama once again embraced the term "Obamacare" while discussing the Affordable Care Act.

It's hard to find an issue on which President Obama and GOP challenger Mitt Romney disagree more than health care.

The 2010 Affordable Care Act is considered President Obama's signature legislative achievement, as well as something Romney has vowed to repeal.

Yet while Democrats in tough races in 2010 shied away from touting the just-passed health law, known by its detractors as Obamacare, the president has embraced both the name and the law on the campaign trail this year.

"We passed health reform — yes, I like the name 'Obamacare' — so your insurance companies can't jerk you around anymore," he told a cheering crowd in Manchester, N.H., last week. "So young people can stay on their parents' plans till they're 26. So women can't be charged more than men for their insurance — being a woman is not a pre-existing condition."

But the health law has been one thing on which Romney has been consistent. 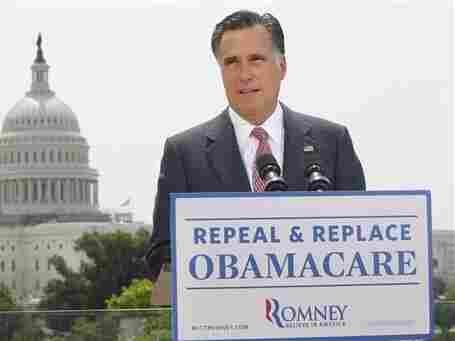 "What the court did not do on its last day in session, I will do on my first day if elected president of the U.S.," he said just after the Supreme Court's decision in June that found the law largely constitutional. "And that is I will act to repeal Obamacare."

Now Romney can't actually repeal the law on his first day in office. He'll need Congress to do that. It might take a while, but it's likely he can slow or stall implementation.

Still, the big question is what, if anything, he'd try to replace the law with.

Here's how he answered that question at the first presidential debate in Denver:

"It's a lengthy description, but No. 1, pre-existing conditions are covered under my plan. No. 2, young people are able to stay on their family plan. That's already offered in the private marketplace; you don't have — have the government mandate that for that to occur."

In fact, Romney's staff had to step in after the debate to clarify that, no, pre-existing conditions wouldn't be covered for most people. Only those who have maintained continuous coverage.

There also wouldn't be any guarantee for young adults to stay on their parents' plans; Romney says it would happen because the private sector is already doing it, albeit with a push from the law.

"The right answer is not to have the federal government take over health care and start mandating to the providers across America, telling a patient and a doctor what kind of treatment they can have," Romney said at the Denver debate. "That's the wrong way to go. The private market and individual responsibility always work best."

Now this sounds curious to people like Jonathan Gruber, an economist from MIT who worked on both the Massachusetts plan that passed when Romney was governor in 2006 and the federal law passed two years ago. Gruber says he is stunned at how Romney can still profess support for his state's law but opposition to the federal law, since the two are such close cousins.

"This is an unprecedented case of a major national policy where we ran an experiment first," he said.

In Massachusetts, the state met both of its goals.

"We wanted to cover the uninsured and we've covered two-thirds of our uninsured residents," Gruber said. "Our uninsurance rate is now down to 3 percent, compared to an 18 percent national rate. And we wanted to fix what was a broken non-group insurance market. And we did; we lowered premiums in that market by 50 percent."

What the original Massachusetts law did not do, however, is attempt to lower health costs overall. (A second law, passed this year, does attempt to take on that task.)

It is cost control that makes the federal law so controversial. There are two big barriers to getting a handle on health spending, Gruber says. "The first is the science, which is we don't really know how to do it," he says. "The second is the politics, which is that even if we did, the politicians wouldn't let us."

That's because saving money always causes pain for someone.

That said, however, the Affordable Care Act does start to take some steps in the direction of cost control. The problem is that most of them are still largely invisible to the public.

"It's all technical; it's all professional; it's all behind the scenes," says Len Nichols of George Mason University.

Nichols says that includes things like paying hospitals less if patients who are discharged are readmitted to the hospital too soon, or encouraging doctors and hospitals to better coordinate patient care.

"But it is indeed making health care cheaper," he says. "Why are health care premiums growing less than they were? Part of the reason is because people have figured out, 'Hey, we can do this stuff cheaper. And we're going to have to, to survive in the long run. So let's start now.' "

The question is, does the health care industry need a federal law to make these changes continue? Many say no.

"All the innovations that Obamacare is trying to impose in a top-down sort of way already exist in the marketplace," says Michael Cannon of the libertarian Cato Institute.

Cannon, like Romney, says real cost control can come only from the private sector.

"Giving patients the money is going to encourage them to be more cost-conscious consumers and force prices down in a way that government has proven itself unable to do."

The problem is, no one knows which would work better because neither has really been tried. So the choice is to let the new law continue to play out, or repeal it and see whether Congress can pass something else. That is, if it doesn't take Congress another generation to reach another compromise.